One day in the late summer of 1958, at a time when the Jet Propulsion Laboratory was still in the hands of the U.S. Army (the transfer to NASA wouldn’t happen until the end of that year), Freeman Dyson and Ted Taylor showed up at the facility outside Pasadena. Try to imagine the scene: At the time, JPL was busy building the Explorer 6 satellite, all 65 kilograms of it. And here came two Project Orion scientists talking about not just satellites but auxiliary vehicles, additional payload to fly aboard their proposed 4000 ton spacecraft that they hoped would explore the outer planets. 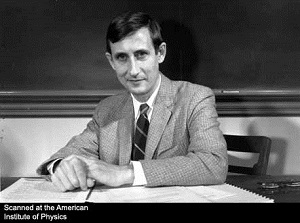 “The reception there was rather cool,” Dyson would later say. “The lady at the front office decided Taylor and I were a pair of crackpots and tried to get rid of us. After about half an hour of arguing we got inside and then it all went very well.”

The entertaining tale is told in George Dyson’s Project Orion: The True Story of the Atomic Spaceship (Henry Holt, 2002), and it’s easy to see why even hardened rocket scientists would be confounded by what the duo proposed. By mid-1958, the largest payload ever lifted into orbit was Sputnik III, weighing in at 1325 kilograms. Project Orion was intended to loft 1600 tons to low-Earth orbit, or in its advanced version, 1300 tons to a landing on one of Saturn’s moons. The moon that most drew Dyson’s eye in 1958 was tiny Enceladus.

When I wrote about this in connection with the recent findings of an ocean within the distant moon, I was delighted to receive the diagram below from George Dyson, which shows the numbers as tabulated by Freeman Dyson in 1958, when details about the outer planets’ moons were sketchy at best. I want to run this as a bit of deep space history, the working figures that would later turn into Freeman Dyson’s document “Trips to Satellites of the Outer Planets, which was declassified in 1987. 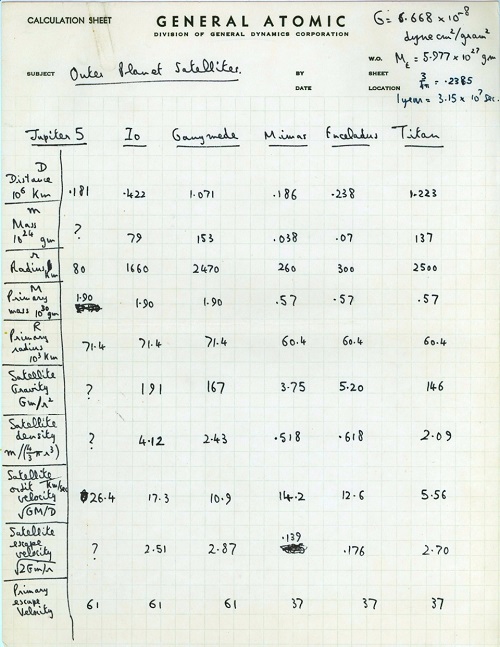 Image: Thinking about deep space destinations in 1958, as the Orion team pondered their best options for a trip that might take place as early as 1970. Credit: Freeman Dyson, courtesy of George Dyson.

With reference to the figures, George Dyson comments:

“Note that the .618 density for Enceladus was not a transcription or arithmetic error, it is due to the mass and radius of the outer planet satellites being known only approximately at that time. (I believe Thomas “Tommy” Gold was brought in as a consultant on the question of selecting landing sites.) These calculations were made to determine the best destination both in terms of an optimum velocity match and highest probability of being able to obtain water ice or hydrocarbons on the surface to replenish the vehicle’s propellant mass.”

Below is the title page of the “Trips to Satellites of the Outer Planets’ report. 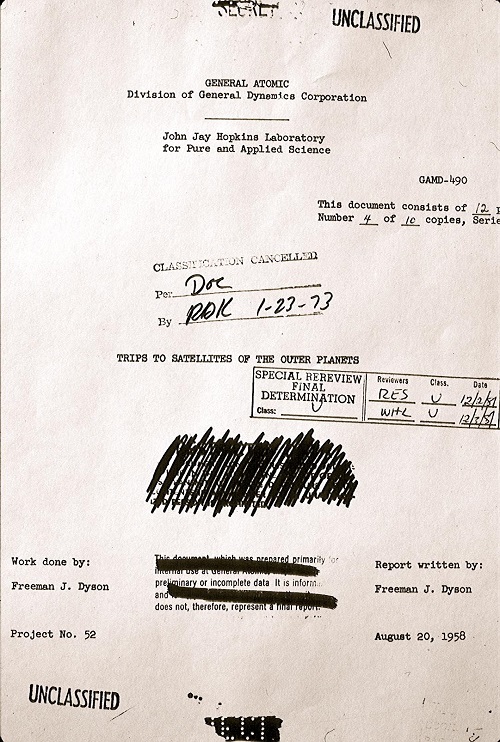 We’ve discussed Orion many times in these pages, though it’s been long enough that it may be time for a general review in the near future. Most Centauri Dreams readers will be familiar with George Dyson’s definitive book on the project’s history, and with the overall concept of detonating nuclear devices behind the craft, with a system of pusher plates and shock absorbers to cushion the crew, and the capability of launching payloads that were mind-boggling in the days of Sputnik. Interestingly, Mars was the first destination the team had in mind, though a landing on the Moon along the way would have been part of that mission. A four or five year mission seemed a possibility, one that Freeman Dyson would liken to the voyage of Darwin’s Beagle.

But the allure of the outer planets and their satellites was hard to resist, particularly when you threw in two ways to make the mission lighter and more efficient. For one thing, it was possible to use atmospheric braking (‘aerobraking’) to reduce propellant mass. I’ll quote from George Dyson’s book on the other:

The second part of the strategy is to gather propellant for the return trip at the destination, thereby reducing the average takeoff weight of the bombs. “We assume that we can use as propellant either ice, ammonia, or hydrocarbons,” wrote Freeman, explaining why Enceladus was such a good place to stop. “We suppose that each propulsion unit contains one-third of its mass in the form of the bomb and other fabricated parts, and two-thirds of its mass in the form of propellant. This means that, when propellant refueling is possible, only one-third of the mass required for the homeward trip need be carried out from Earth.” When you put these numbers together, the end results were astonishing. “With the use of atmospheric drag a round-trip to satellites of either Jupiter or Saturn could be made with a total velocity increment of the order of 40 km/sec. With refueling and braking, all the satellites become accessible with a round-trip mass-ratio less than 2.”

The Mars ship can thus become an outer planet ship that refuels along the way. And given the document shown above, I have to close with this last quote from the book:

Forty years later, Freeman and I review a two-page handwritten General Atomic calculation sheet, “Outer Planet Satellites,” dating from 1958 or 1959. It lists, for nine different satellites, ten different parameters such as orbital velocity, escape velocity, density, and gravity that determine the suitability of the satellites as places to land. Freeman smiles as he carefully studies the numbers.