How do you produce life on an early Earth bathed in ultraviolet radiation? The presumption when I was growing up was that the combination of chemicals in ancient ponds, fed energy by lightning or ultraviolet light itself, would produce everything needed to start the process. Thus Stanley Miller and Harold Urey’s experiments, beginning in 1953 at the University of Chicago, which simulated early Earth conditions to produce amino acids out of a sealed ‘atmosphere’ of water, ammonia, methane and hydrogen, with electrodes firing sparks to simulate lightning.

But there are other ways of explaining life’s origins, as a new study from the Jet Propulsion Laboratory and the Icy Worlds Team at the NASA Astrobiology Institute reminds us. Hydrothermal vents on the sea floor have been under consideration since the 1980s, with some researchers pointing to the ‘black smokers’ that produce hot, acidic fluids. The new NASA work looks at much cooler vents bubbling with alkaline solutions like those in the ‘Lost City,’ a field of hydrothermal activity in the mid-Atlantic on the seafloor mountain Atlantis Massif. 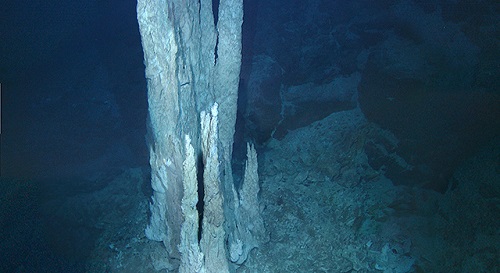 Image: This image from the floor of the Atlantic Ocean shows a collection of limestone towers known as the “Lost City.” Alkaline hydrothermal vents of this type are suggested to be the birthplace of the first living organisms on the ancient Earth. Credit: JPL.

Here there is a field of about thirty large calcium carbonate chimneys — some 30 to 60 meters tall — and a number of smaller structures venting mainly hydrogen and methane into the surrounding water. The so-called ‘water world’ theory that JPL’s Michael Russell has been working on since 1989 draws on the idea that warm alkaline vents like these would have maintained a state of imbalance with ancient oceans that were acidic. Life is, in this formulation, seen as the inevitable outcome of disequilibrium, producing enough energy to drive its formation.

Thus we have a proton gradient with hydrogen ions concentrated largely on the outside of the vent’s chimneys, which the work refers to as ‘mineral membranes.’ We also have an electrical gradient between oceans rich with carbon dioxide. and hydrogen and methane from the vents as they meet at the chimney wall. The transference of electrons could have produced complex organic compounds, using processes not so different from those that occur in mitochondria.

“Within these vents, we have a geological system that already does one aspect of what life does,” said Laurie Barge, second author of the study at JPL. “Life lives off proton gradients and the transfer of electrons.”

…there is an advantage to be gained from examining the transition from geochemistry to biochemistry from the bottom up, that is, to “look under the hood” at life’s first free energy–converting nanoengines or “mechanocatalysts.” Such an approach encourages us to see life as one of the last in a vast hierarchical cascade of emergent, disequilibria-converting entropy-generating engines in the Universe. In doing so, we keep our sights on the “astro” in astrobiology.

The researchers speculate that minerals may have played the role of enzymes in the ancient ocean, interacting with local chemicals and driving reactions. A mineral called ‘green rust’ (fougèrite) could use the proton gradient to produce phosphate-laden molecules capable of storing energy. Molybdenum is also in play, a rare metal that can drive important chemical reactions. Thus basic metabolic reactions around sea floor hot springs may help to explain not only how life emerged on our own planet but also how it may emerge on worlds far beyond.

On this latter point, the paper explains how to proceed:

In considering habitability and the potential for life elsewhere in the Solar System and beyond, the physical and chemical disequilibria that obtain on wet icy rocky worlds, and the various processes that might relieve them, need to be established. If life’s origin is ultimately coupled to geophysical convection in a particular geochemical context, one should be able to make predictions about life’s likelihood on a planet or moon of interest from application of coupled chemical and fluid/geodynamical modeling, and from the availability of key feedstocks, thus accounting for other planetary energetic drivers, for example, tidal and radiogenic heating, solar wind interactions, magnetic dynamos—appropriate to the object in question.

We’d like to account, in other words, for the disequilibrium-producing factors that could play an astrobiological role on multitudes of exoplanets. The possibilities range widely, from gravitational effects to thermal and chemical gradients that can all play a role in life’s inception. Particularly close to home, of course, we focus in on places like Enceladus and Europa, where we have nearby laboratories for observing these processes in action. Until we can put the right kind of instrumentation on the scene, continuing Earth-bound lab work on these ideas is the way forward.

Next post: Kepler-186f: Close to Earth Size, in the HZ