Night and Day on β Pictoris b

Writing yesterday about Kevin Luhman’s discovery of another cold brown dwarf in the stellar neighborhood reminded me of work we discussed earlier this year in which the weather on the surface of Luhman 16 B was mapped. This was done using the European Southern Observatory’s Very Large Telescope (see Focus on the Nearest Brown Dwarfs), which found variations in the brightness of one of the two dwarfs in this interesting binary just six light years from the Sun. We are beginning, in other words, to chart features in the atmosphere of a brown dwarf whose atmosphere is 1100 degrees Celsius and filled with molten iron and minerals.

With that in mind, the news that Dutch astronomers also using the Very Large Telescope (with the CRIRES spectrograph) had measured the rotation rate of an exoplanet immediately caught my eye. Beta Pictoris b orbits its primary some 63 light years from Earth in the constellation Pictor (The Painter’s Easel). It was one of the first exoplanets to be directly imaged and, at a distance of 8 AU, the closest exoplanet to its star that has ever been imaged. Now we learn that the equatorial rotation velocity of the planet is almost 100,000 kilometers per hour.

Bear in mind that Beta Pictoris b is about 3000 times more massive than the Earth and some sixteen times larger, yet a day on this world lasts a paltry eight hours. We can contrast that with Jupiter’s equator, whose cloud cover rotates at 47,000 kilometers per hour, or with the Earth, whose rotation rate is a comparatively puny 1674.4 kilometers per hour. What we’re seeing here is an extension of the relationship between mass and rotation that we’ve already observed in the Solar System. Remco de Kok is a co-author on the paper announcing the find:

“It is not known why some planets spin fast and others more slowly,” says de Kok, “but this first measurement of an exoplanet’s rotation shows that the trend seen in the Solar System, where the more massive planets spin faster, also holds true for exoplanets. This must be some universal consequence of the way planets form.” 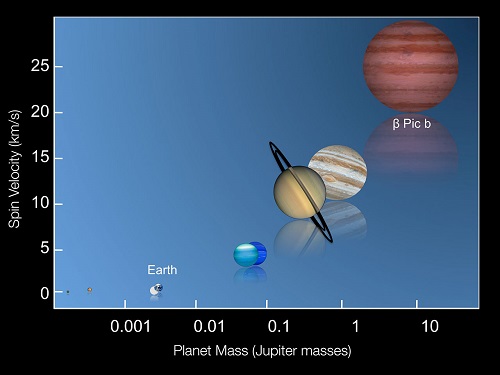 Image: This graphic shows the rotation speeds of several of the planets in the Solar System along with the recently measured spin rate of the planet Beta Pictoris b. Credit: ESO/I. Snellen (Leiden University).

That we could make such measurements of this young world (Beta Pictoris b is about 20 million years old) is an indication of advancing techniques similar to those that brought us the weather on Luhman 16B. The researchers, from Leiden University and the Netherlands Institute for Space Research (SRON), studied changes in the wavelength of received light to detect the different speeds and direction of different parts of the planet. This was exquisitely challenging work in that it involved separating this already tiny signal from the light of the parent star.

The team’s variation on Doppler imaging allowed measurements of the wavelengths of radiation from the planet to a precision of one part in 100,000, enough to detect the velocity of the various parts of the planet’s atmosphere that are emitting light. “Using this technique we find that different parts of the planet’s surface are moving towards or away from us at different speeds, which can only mean that the planet is rotating around its axis,” adds lead author Ignas Snellen.

We can imagine future work not only in creating a global map of Beta Pictoris b’s cloud patterns but, with the help of the upcoming European Extremely Large Telescope (E-ELT) and its planned METIS spectrograph and imager, maps of exoplanets much smaller in size. For now, though, Beta Pictoris b may remain the target of the team’s near-term studies. From the paper:

The SNR [signal-to-noise ratio] that can be achieved on a planet spectrum for this type of observation is a strong function of telescope diameter D. This opens the way of obtaining two-dimensional maps of the planet using Doppler imaging, a technique used to map spot distributions on fast-rotating active stars. Very recently, a first Doppler image map was produced for the nearby brown dwarf Luhman 16B (K=9.73) using CRIRES on the VLT, showing large-scale bright and dark features, indicative of patchy clouds. The planet β Pictoris b is only a factor 13 fainter than Luhman 16B. Our simulations…show that a similar study can be conducted on β Pictoris b using future instrumentation.

The paper is Snellen et al., “The fast spin-rotation of a young extra-solar planet,” to be published online in Nature 1 May 2014.