We’ve been looking at not just interstellar but intergalactic crossings in the past few days, something of an homage to Carl Sagan, whose enthusiasm for continuous acceleration at 1 g and relativistic time dilation was immense in the years shortly after Robert Bussard’s key paper on interstellar ramjets. Without a working ramjet and largely unaided by time dilation, we’re faced with millions of years of flight time to reach M31. What to do?

In a recent paper, discussed here by Adam Crowl on Monday, Robin Spivey ponders ‘autonomous probes that spawn life upon arrival’ as a way of reaching the Virgo cluster, which he wants to do for reasons Adam explained in his post. He’s also counting on continuous acceleration at 1 g for these small ‘seed ships,’ but other than mentioning antimatter, he doesn’t explore how this would be done, and we’ve seen the results Sagan and Iosif S. Shklovskii came up with for antimatter when they worked out the equations.

Let’s assume that the ‘slow boat’ solution is the only practical way to proceed. Here I think Adam’s suggestion that we take our environment with us rather than building a worldship is sensible, flinging a small star and planet out of the galactic core toward the destination. Ray Villard pondered the same question back in 2010 in an online piece called The Great Escape: Intergalactic Travel is Possible. He points to the four million solar mass black hole at the center of the Milky Way as the only conceivable way to impart the needed kinetic energy to a star.

Here’s how Villard describes the mechanism:

The theory is that a star could be slingshot out of a binary star system if the stellar duo swung close to the central black hole. The hole’s gravitational tidal forces would break apart the pair’s gravitational embrace.

In just a few thousand years the star would ascend out of the galactic plane and hurtle deep into intergalactic space. The persistent tug of our Milky Way’s dark matter halo would slow it down but the star would never fall back into the Galaxy. 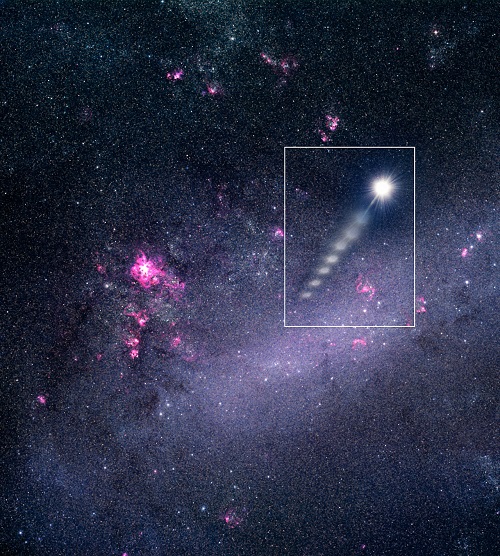 We do in fact know about a number of such hypervelocity stars, some of which may be moving fast enough to exceed galactic escape velocity. Consider this: Ordinary stars in the Milky Way have velocities in the range of 100 kilometers per second, while some hypervelocity stars near galactic center show velocities of ten times that, closing on 1000 km/sec. Meanwhile, a team led by Tilmann Piffl (Leibniz Institute for Astrophysics, Potsdam) that has been working with high-velocity stars has calculated escape velocity for objects in the vicinity of our own Solar System. The team uses data from the Radial Velocity Experiment (RAVE) survey.

The result: We would need 537 kilometers per second to get our payload fast enough to escape the galaxy. That’s a high speed, of course, but in terms of small craft, it’s not a lot higher than some studies have shown a solar sail could reach using an extremely tight ‘Sundiver’ maneuver to let itself be whipped out of the Solar System. Piffl’s team has catalogued hypervelocity stars moving at 300 km/sec, and we also know of unbound hypervelocity stars (although it’s a tricky call because of uncertainties about the mass distribution of the galaxy). Even some neutron stars are fast-movers: RX J0822-4300 was measured to move at 1500 km/sec in 2007.

Not all hypervelocity stars come from encounters with the black hole at galactic center. In work described at the American Astronomical Society meeting in January, Kelly Holley-Bockelmann and grad student Lauren Palladino found what may be a new class of hypervelocity stars moving with sufficient speed to escape the galaxy (see Stars at Galactic Escape Velocity). Says Holley-Bockelmann:

“It’s very hard to kick a star out of the galaxy. The most commonly accepted mechanism for doing so involves interacting with the supermassive black hole at the galactic core. That means when you trace the star back to its birthplace, it comes from the center of our galaxy. None of these hypervelocity stars come from the center, which implies that there is an unexpected new class of hypervelocity star, one with a different ejection mechanism.”

As we learn more about what creates hypervelocity stars, can we imagine far future technologies that might help us exploit them? If so, an intergalactic journey opens up. A civilization that somehow harnessed a hypervelocity star for such a journey — or one that arose on a planetary system that had been already flung into intergalactic space — would experience eons in the space between the galaxies, periods that dwarf the lifetime of human civilizations. Villard speculates about the astronomers of such a civilization trying to discover their place in the universe as their ‘worldship’ exited the Milky Way, globular clusters peppering the sky, the galaxy’s spiral arms winding out from a nucleus looking like ‘a fuzzy headlamp.’

Inevitably larger telescopes would yield a view of the universe that revealed myriad other pinwheel structures. Spectroscopy would show they are racing away too. Still the aliens literally wouldn’t know if they’re coming or going. A long-lived civilization’s science archive would note the shrinking and dimming of the Milky Way over geologic time. They might conclude that the eerie pinwheel is speeding away from them. And without a cosmological or stellar framework, they would have no idea of cosmic evolution. They would not even be able to calibrate the vast distance to the Galaxy.

But let’s assume for the sake of argument that a civilization might knowingly set out on a hypervelocity star system, its futuristic powers vast enough to shape the encounter between the star and the galactic black hole so as to direct its journey to the proper destination. Any culture that did this would knowingly be splitting into different evolutionary lines given the immensity of the distances and time involved, leaving behind its own species to grow into another over the course of millions of years. Whether and why any species might choose to make this kind of a journey is an exercise left to the reader, and to the imagination of science fiction writers.

We’ve seen stars manipulated for a variety of purposes in science fiction, as a matter of fact. Tomorrow I’ll wrap up this week of speculations on intergalactic travel with a look at some of the methods that have been employed to move stars around, and the possible SETI implications that arise from all this.

The Piffl paper is “The RAVE survey: the Galactic escape speed and the mass of the Milky Way,” submitted to Astronomy & Astrophysics (preprint). The Palladino paper is “Hypervelocity Star Candidates in the SEGUE G and K Dwarf Sample,” The Astrophysical Journal Vol. 780, No. 1 (2014), with abstract and preprint available.