The Milky Way from a Distance

Growing up in the American Midwest, I used to haunt the library in Kirkwood, Missouri looking for books on astronomy. I had it in mind to read all of them and I pretty much did, looking with fascination at fuzzy images of distant objects I yearned to see close up. What did Saturn look like from Titan? What would it be like to be close enough to see the Crab Nebula fill the sky? Breathtakingly, what would it look like to be inside one of the great globular clusters?

Early on in Vernor Vinge’s A Fire Upon the Deep the character Ravna finds herself looking out a window at the entire Milky Way from a distance sufficient to view it whole:

She’d guessed right: tonight the Galaxy owned the sky… Without enhancement, the light was faint. Twenty thousand light-years is a long, long way. At first there was just a suggestion of mist, and an occasional star. As her eyes adapted, the mist took shape, curving arcs, some places brighter, some dimmer. A minute more and … there were knots in the mist … there were streaks of utter black that separated the curving arms … complexity on complexity, twisting toward the pale hub that was the Core. Maelstrom. Whirlpool. Frozen, still, across half the sky.

When I read that, all I could think was that I’d like to know what Chesley Bonestell would have done with the scene. The memory stuck with me, enough so that last weekend, I went digging through my collection of old magazines in search of a particular cover. We had been talking on Centauri Dreams about a Poul Anderson story called World Without Stars, and having been reminded of it by several readers, I kept thinking it was in a 1960s era Analog, and that Bonestell had indeed done a cover showing the Milky Way. 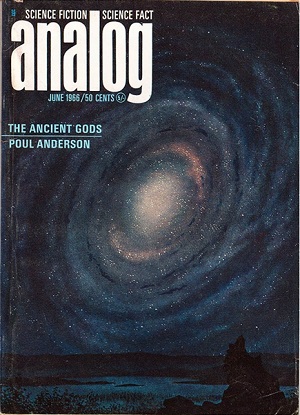 Soon I had magazines spread all over my office floor but couldn’t put my hands on the right one. The problem was that while I remembered (vaguely) the plot, about a crew that found itself tens of thousands of light years outside the galaxy on a mission to an isolated technical civilization, I had forgotten the original title. Finally I did the obvious and ran World Without Stars through the Internet Speculative Fiction Database, where I found the issue numbers. It turns out the story was serialized in Analog’s June and July, 1966 issues as The Ancient Gods, and my memory of a Chesley Bonestell cover was correct.

But serendipitous things happen when you collect old magazines. In leafing through the June issue, I came across a letter Poul Anderson had written to John Campbell, then in the latter part of his long run at the magazine — Campbell published it in Brass Tacks, his letter column, even though it was really just directed at the editor. Anderson talks about having been at Bonestell’s place and seeing the cover art for The Ancient Gods.

Did you notice in the Vinge paragraph above how dim the galaxy is depicted as being? Ravna thinks to herself that 20,000 light years is a long way out, and Anderson’s crew was to be a lot further out than that. Bonestell had been thinking all this over and had to find a way to work it into his painting. Thus Anderson to Campbell in the letter:

If you look at the Bonestell cover, it does appear to be glowing more brightly than this, but Anderson says this is not a contradiction. His imagined planet’s natives, he points out, are adapted to the dim light of the red dwarf they orbit (no tidal lock here, evidently), and the galaxy in their night would appear luminous enough. Anderson adds: “To us, galaxies look brilliant in an astronomical photograph — but that picture involved a huge light-gathering mechanism plus hours of exposure. We could make the Milky Way look just as bright if we wanted to.”

Anyway, Bonestell had to come up with something that would be bright enough to be interesting while still suggesting the distances involved, and he certainly manages this. For the humans who have just landed on this remote world, the galaxy at 200,000 light years out is indeed a dim spectacle, as described in the story:

This evening the galaxy rose directly after sunset. In spite of its angular diameter, twenty-two degrees along the major axis, our unaided eyes saw it ghostly pale across seventy thousand parsecs. By day it would be invisible. Except for what supergiants we could see as tiny sparks within it, we had no stars at night, and little of that permanent aurora which gives the planets of more active suns a sky-glow.

Vast and beautiful, it had barely cleared the horizon, which made it seem yet more huge. I could just trace out the arms, curling from a lambent nucleus… yes, there was the coil whence man had come, though if I could see man by these photons he would still be a naked half-ape running the forests of the Earth…

Keep going further out and galaxies tend to all but disappear. Greg Laughlin noted this back in 2005 on his systemic site, where he discussed the beauty of objects like M104, the Sombrero Galaxy, which seen from a distance a bit further than Anderson’s 200,000 light years, would appear as “only a faintly ominous, faintly glowing flying saucer.” M31, the great Andromeda galaxy, is larger than the full Moon in the sky, but go out tonight and try to find it. Laughlin adds: “Our Galaxy, the Andromeda Galaxy, and the Sombrero Galaxy are all essentially just empty space. To zeroth, to first, to second approximation, a galaxy is nothing at all.”

More power, then, to long CCD time exposures and big mirrors, allowing us to see the things our eyes would perceive only dimly. Part of the thrill of those early library days was in looking at spectacular objects and trying to imagine them close up. But it was a thrill of equal measure to begin to learn about the wavelengths of light, about the gathering of photons, and the way we can tease out information about the universe with instruments designed to surmount our limitations.