Remember Robert Forward’s beamed sail concepts designed for travel to another star? Forward was the master of thinking big, addressing questions of physics which, once solved, left it up to the engineers to actually build the enormous infrastructure needed. Thus his crewed mission to Epsilon Eridani, which would demand not only a large power station in the inner system but a huge Fresnel lens out between the orbits of Saturn and Uranus. A 75,000 TW laser system was involved, a ‘staged’ sail for deceleration at the destination, and as for that lens, it would mass 560,000 tons and be a structure at least a third the diameter of the Moon.

In addition to being a highly regarded physicist, Forward was also a science fiction writer who detailed his beamed sail concepts in Rocheworld (Baen, 1990), which grew out of a previous version in Analog. I always thought of the Epsilon Eridani mission as his greatest attempt to confound human engineering, but later came to think that vast structures like his outer system lens might be possible. Rather than legions of space-suited workers building the thing, perhaps nanotechnology could come to the rescue, so that one technology builds another. It’s another reason to include the possibility of vast structures in our SETI thinking.

All of this is inspired by looking at the recent announcement from the NASA Innovative Advanced Concepts (NIAC) program, which has named twelve projects for Phase 1 awards and five for Phase 2. The latter receive up to $500,000 each over a two-year period, often growing out of ideas previously broached in a Phase 1 paper and refining the work explored therein. The Jet Propulsion Laboratory is leading one of the Phase II projects, one called ‘Orbiting Rainbows,’ that inevitably calls Forward to mind because it involves clouds of dust-like matter being shaped into the primary element for an ultra-large space aperture. In other words, a kind of lens.

Here’s a snippet from JPL’s Marco Quadrelli describing the principle:

Our objective is to investigate the conditions to manipulate and maintain the shape of an orbiting cloud of dust-like matter so that it can function as an ultra-lightweight surface with useful and adaptable electromagnetic characteristics, for instance, in the optical, RF, or microwave bands. Inspired by the light scattering and focusing properties of distributed optical assemblies in Nature, such as rainbows and aerosols, and by recent laboratory successes in optical trapping and manipulation, we propose a unique combination of space optics and autonomous robotic system technology, to enable a new vision of space system architecture with applications to ultra-lightweight space optics and, ultimately, in-situ space system fabrication.

Quadrelli points out that the cost of any optical system is always driven by the size of the primary aperture, which is why Forward’s vast lens seems so out of reach. Have a look at the image below for what Quadrelli proposes. Here we’re seeing a cloud of what he refers to as ‘dust-like objects’ that can be optically manipulated. The particles are shaped by light pressure into a surface that can be tuned to act coherently in specific frequencies. The idea seems to have grown out of recent work in the physics of optically manipulating small particles in the laboratory — think ‘optical tweezers’ of the kind that have made it possible to work at the nanotech scale. 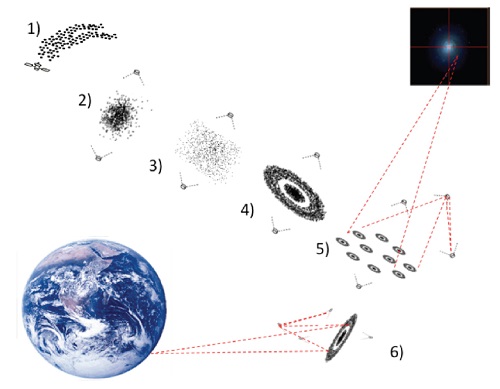 Image: Creation of lenses out of clouds of tiny objects. Credit: Marco Quadrelli/JPL.

The Orbiting Rainbows study is all about the feasibility of making a single aperture out of a cloud of particles, but the implications are intriguing and Quadrelli names them in his short description. Multiple ‘aerosol lenses’ could be combined to create powerful tools for exoplanet research, all the while teaching us much about remote manipulation of clouds of matter in space. The goal is a completely reconfigurable, fault-tolerant lensing system of huge size and low cost. This would complement the next generation of extremely large telescopes on Earth and bring an entirely new approach to the operation of telescopes in space. Quadrelli’s description continues:

A cloud of highly reflective particles of micron size acting coherently in a specific electromagnetic band, just like an aerosol in suspension in the atmosphere, would reflect the Sun’s light much like a rainbow. The only difference with an atmospheric or industrial aerosol is the absence of the supporting fluid medium. This new concept is based on recent understandings in the physics of optical manipulation of small particles in the laboratory and the engineering of distributed ensembles of spacecraft swarms to shape an orbiting cloud of micron-sized objects.

I dwell on this JPL concept because we’ve recently been talking about the potential of tiny spacecraft operating in swarms, and considered them even in terms of propulsion, moving from Clifford Singer’s pellet ideas to Gerald Nordley’s intelligent ‘snowflake’ designs (see, for example, ‘Smart Pellets’ and Interstellar Propulsion, and the sequence of articles around it). These pellets would constitute a propellant stream for a departing spacecraft, but we’ve also seen Mason Peck’s ideas about satellites the size of a microchip that can be manipulated through interactions with the magnetic fields of planets, and perhaps accelerated to interstellar velocities (see Sprites: A Chip-Sized Spacecraft Solution).

So miniaturization, swarm operations and propulsion through natural interactions (Peck’s Sprites take advantage of the Lorentz force that affects charged particles moving through a magnetic field) all factor into evolving thinking about deep space. Nanotechnology enables new operations at both ends of the scale spectrum, perhaps constructing the vast structures of the science fictional imagination (Dyson spheres come to mind) and potentially enabling tiny spacecraft whose low mass makes getting them up to speed a much easier matter than heavy rockets.

Back to Quadrelli. His reflective particles aren’t ‘intelligent,’ but the principle of shaping them into apertures using autonomous robotic technology shares in some of the same premises. We’ll need to see, of course, just how this shaping works, how it manipulates what kinds of dust-like matter, and just how adaptive the resultant clouds are to changes in configuration, but that is what a Phase II study is all about. The point is, when we need something huge, like Clifford Singer’s 105 kilometer particle accelerator, nature can sometimes offer a better solution, like the acceleration of Mason Peck’s Sprites within Jupiter’s powerful magnetic fields.

Finding ways to assemble huge lenses is a project cut out of the same cloth. And at the Phase I level at NIAC, several studies cry out for later analysis here, including Webster Cash’s Aragoscope, which the University of Colorado scientist hopes will ‘shatter the cost barrier for large, diffraction-limited optics,’ producing the possibility of telescopes with a thousand times the resolution of the Hubble instrument. Also impressive is the Heliopause Electrostatic Rapid Transit System from Marshall Space Flight Center (Janhunen’s electric sails!) and Justin Atchison’s work at Johns Hopkins on Swarm Flyby Gravimetry, which again attracts me by its use of miniaturization and swarm technologies. More on these Phase I NIAC studies next week