Our recent discussions of the latest awards from the NASA Innovative Advanced Concepts office remind me that you can easily browse through the older NIAC awards online. But first a word about the organization’s history. NIAC operated as the NASA Institute for Advanced Concepts until 2007 under the capable leadership of Robert Cassanova, who shepherded through numerous studies of interest to the interstellar-minded, from James Bickford’s work on antimatter extraction in planetary magnetic fields to Geoffrey Landis’ study of advanced solar and laser lightsail concepts. The NIAC Funded Studies page is a gold mine of ideas.

NIAC has been the NASA Innovative Advanced Concepts office ever since 2011, when the program re-emerged under a modified name. NASA’s return to NIAC in whatever form was a welcome development. Remember that we had lost the Breakthrough Propulsion Physics project in 2002, and there was a time there when the encouragement of ideas from outside the agency seemed moribund. Now we’re seeing opportunities for new space concepts that have ramifications on how NASA conducts operations, a welcome platform for experimentation and discovery.

Over the years I’ve written a number of times about Webster Cash’s ideas on ‘starshades,’ which came together under the New Worlds concept that has itself been through various levels of NASA funding. Starshades are large occulters that are used to block out the light of a central star to reveal the planets orbiting around it. Properly shaped, a starshade placed in front of a space telescope can overcome the diffraction of light (where light bends around the edges, reducing the occulter’s effectiveness). Cash’s New Worlds pages provide an overview of his starshade concepts and link to NASA study documents presenting the idea in detail.

With this background, it’s interesting to see that NIAC awarded Cash a new NIAC grant in June to study what he calls an Aragoscope, named after Dominique-François-Jean Arago, who carried out a key experiment demonstrating the wave-like nature of light in 1818. Rather than overcoming the diffraction of light, as the starshade is designed to do, the Aragoscope would take advantage of it, blocking the front of the telescope with a large disk but allowing the diffracted light to converge to form an image behind the disk. This ‘Arago Spot’ (also called the ‘Poisson Spot’) was what Arago had demonstrated, a bright point that appears at the center of a circular object’s shadow. 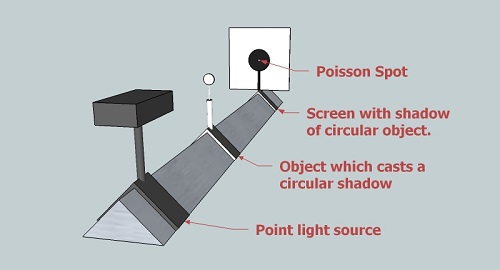 Image: Arago spot experiment. A point source illuminates a circular object, casting a shadow on a screen. At the shadow’s center a bright spot appears due to diffraction, contradicting the prediction of geometric optics. Credit: Wikimedia Commons.

How to put this effect to work in the design of a space telescope? Unlike a starshade, the Aragoscope would be circular in shape, an opaque disk whose diffracted light is directed toward a pinhole camera at its center, then to a telescope that provides extremely high resolution views of stellar objects. Cash sees the method as a way to lower the cost of large optical systems limited by diffraction effects in a dramatic way. Rather than being overcome by such effects, his instrument would gather diffracted light and refocus it. From the NASA announcement last June:

The diagram in the summary chart shows a conventional telescope pointed at an opaque disk along an axis to a distant target. Rather than block the view, the disk boosts the resolution of the system with no loss of collecting area. This architecture, dubbed the “Aragoscope” in honor of the scientist who first detected the diffracted waves, can be used to achieve the diffraction limit based on the size of the low cost disk, rather than the high cost telescope mirror. One can envision affordable telescopes that could provide 7cm resolution of the ground from geosynchronous orbit or images of the sky with one thousand times the resolution of the Hubble Space Telescope. 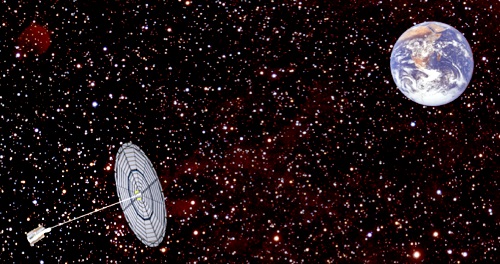 Image: A view of the Aragoscope, an opaque disk with associated telescope. Credit: Webster Cash.

An article in Popular Mechanics this July notes that a 1000-kilometer Aragoscope could study the event horizon of black holes in the X-ray spectrum, making for highly detailed views of interesting galactic nuclei like that of M87. But Cash also talks about picking out features like sunspots and plasma ejections on nearby stars, and says an early target, once a space-based version of the Aragoscope could be launched, would be Alpha Centauri A and B. It’s intriguing that the Aragoscope, in some ways, turns Cash’s earlier starshade concepts on their head, aiming for high resolution rather than high contrast. “I spent a lot of time understanding the physics of destroying diffractive waves very efficiently,” he told the magazine. “In the process, it’s not hard to see that you can use those detractive waves to create images.”