Space dust collected by NASA’s Stardust mission, returned to Earth in 2006, may be interstellar in origin. We can hope that it is, because the Solar System we live in ultimately derives from a cloud of interstellar gas and dust, so finding particles from outside our system takes us back to our origins. It’s also a first measure — as I don’t have to tell this audience — of the kind of particles a true interstellar probe will encounter after it has left our system’s heliosphere, the ‘bubble’ in deep space blown out by the effects of the Sun’s solar wind. 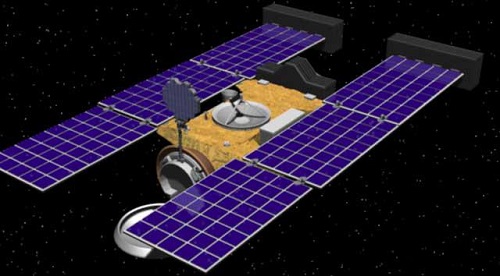 Image: Artist’s rendering of the Stardust spacecraft. The spacecraft was launched on February 7, 1999, from Cape Canaveral Air Station, Florida, aboard a Delta II rocket. It collected cometary dust and suspected interstellar dust and sent the samples back to Earth in 2006. Credit: NASA JPL.

The cometary material has been widely studied in the years since its return, but how to handle the seven potentially interstellar grains thus far found, and verify their origin? It’s not an easy task. Stardust exposed its collector on the way to comet Wild 2 between 2000 and 2002. Aboard the spacecraft, sample collection trays made up of aerogel and separated by aluminum foil trapped three of the potentially interstellar particles, which are only a tenth as large as Wild 2’s comet dust, within the aerogel, while four other particles of interest left pits and rim residue in the aluminum foil. At Berkeley, synchrotron radiation from the lab’s Advanced Light Source, along with scanning transmission x-ray and Fourier transform infrared microscopes, have ruled out many interstellar candidate dust particles because they are contaminated with aluminum.

The latter may have been knocked off the spacecraft to become embedded in the aerogel, but we’ll learn more as the work continues. The grains are more than a thousand times smaller than a grain of sand. To confirm their interstellar nature it will be necessary to measure the relative abundance of three stable isotopes of oxygen, says Andrew Westphal (UC-Berkeley), lead author of a paper published last week in Science. In this news release from Lawrence Berkeley National Laboratory, Westphal says that while the analysis would confirm the dust’s origin, the process would destroy the samples, which is why the team is hunting for more particles in the Stardust collectors even as it practices isotope analysis on artificial dust particles. 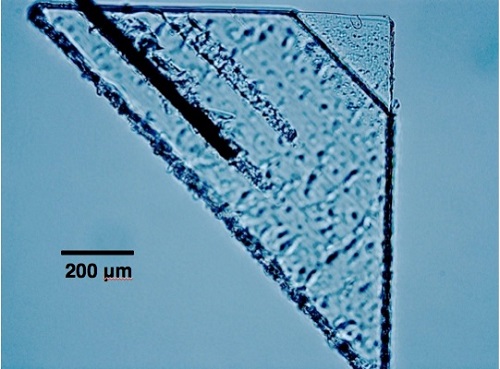 Image: The bulbous impact from the vaporized dust particle called Sorok can barely be seen as the thin black line in this section of aerogel in the upper right corner. Credit: Westphal et al. 2014, Science/AAAS.

So far the analysis has been entirely non-destructive and the results have been in some ways surprising. Twelve papers being published in Meteoritics & Planetary Science are outlining the methods now being deployed. Finding the grains has meant probing the aerogel panels by studying tiny photographic ‘slices’ at different visual depths, producing a sequence of millions of images that was turned into a video. A citizen science project called Stardust@home was a player in the analysis, using distributed computing and the eyes of volunteers to study the video to look for tracks caused by the dust. So far, more than 100 tracks have been found but not all have been analyzed, and only 77 of the 132 aerogel panels have been scanned. 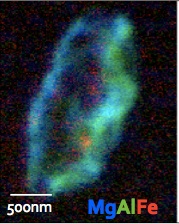 So we have the potential for further finds. What we’re learning is that if this dust is indeed interstellar, it’s surprisingly diverse. Says Westphal:

“Almost everything we’ve known about interstellar dust has previously come from astronomical observations—either ground-based or space-based telescopes. The analysis of these particles captured by Stardust is our first glimpse into the complexity of interstellar dust, and the surprise is that each of the particles are quite different from each other.”

Two of the larger particles have a fluffy composition that Westphal compares to a snowflake, a structure not anticipated from earlier models of interstellar dust. Interestingly, they contain olivine, a mineral composed of magnesium, iron and silicon, which implicates disk material or outflows from other stars modified by its time in the interstellar deep. The fact that three of the particles found in the aluminum foil between tiles on the collector tray also contained sulfur compounds is striking, as its presence was not expected in interstellar particles. The ongoing analysis of the remaining 95 percent of the foils in the collector may help clarify the situation.