I like George Johnson’s approach toward SETI. In The Intelligent-Life Lottery, he talks about playing the odds in various ways, and that of course gets us into the subject of gambling. What are the odds you’ll hit the right number combination when you buy a lottery ticket? Whenever I think about the topic, I always remember walking into a casino one long ago summer on the Côte d’Azur. I’ve never had the remotest interest in gambling, and neither did the couple we were with, but my friend pulled a single coin out of his pocket and said he was going to play the slots.

“This is it,” he said, holding up the coin, a simple 5 franc disk (this was before the conversion to the Euro). “No matter what happens, this is all I play.”

He went up to the nearest slot machine and dropped the coin in. Immediately lights flashed and bells rang, and what we later calculated as the equivalent of about $225 came pouring out. Surely, I thought, he’ll take at least one of these coins and play it again — it’s how gambling works. But instead, he headed for the door and we turned the money into a nice meal. $225 isn’t a huge hit, to be sure (not in the vicinity of Monte Carlo!), but calculating the value of the 5 franc coin at about a dollar, he did OK. As far as I know,none of us has ever gone back into a casino. 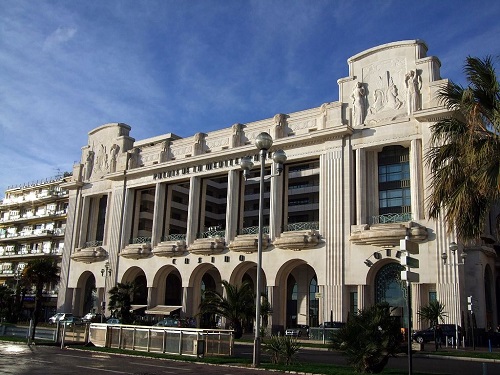 Image: The Palais de la Méditerranée in Nice. It’s possible to drop a lot of money in here fast, but we got out unscathed.

The odds on winning the grand prize in a lottery are formidable, and Johnson notes that a Powerball prize of $90 million, the result of hitting an arbitrary combination of numbers, went recently to someone who picked up a ticket at a convenience store in Colorado. The odds on that win were, according to Powerball’s own statistics, something like one in 175 million.

Evolutionary biologist Ernst Mayr probably didn’t play the slots, but he used his own calculations of the odds to argue against Carl Sagan’s ideas on extraterrestrial civilizations. No way, said Mayr, intelligence is vanishingly rare. It took several billion years of evolution to produce a species that could build cities and write sonnets. If you’re thinking of the other inhabitants of spaceship Earth, consider that we are one out of billions of species that have evolved in this time. What slight tug in the evolutionary chain might have canceled us out altogether?

Johnson likewise quotes Stephen Jay Gould, who argued that so many chance coincidences put us where we are today that we should be awash in wonder at our very existence. We not only hit the Powerball numbers, but we kept buying tickets, and with each new ticket, we won again and got an even larger prize. Some odds!

For Gould, the fact that any of our ancestral species might easily have been nipped in the bud should fill us “with a new kind of amazement” and “a frisson for the improbability of the event” — a fellow agnostic’s version of an epiphany.

“We came this close (put your thumb about a millimeter away from your index finger), thousands and thousands of times, to erasure by the veering of history down another sensible channel,” he wrote. “Replay the tape a million times,” he proposed, “and I doubt that anything like Homo sapiens would ever evolve again. It is, indeed, a wonderful life.”

A universe filled with planets on which nothing more than algae and slime have evolved? Perhaps, but of course we can’t know this until we look, and I think Seth Shostak gets it right in an essay on The Conversation called We Could Find Alien Life, but Politicians Don’t Have the Will. Seth draws the distinction between searching for life per se, as we are engaged in on places like Mars, and searching for intelligent beings who use technologies to communicate. He’s weighing evolution’s high odds against the sheer numbers of stellar systems we’re discovering, and saying the idea of other intelligence in the universe is at least plausible.

And here the numbers come back into play because, despite my experience in the Nice casino, we’re unlikely to hit a SETI winner with only a few coins. Shostak points out that the proposed 2015 NASA budget allocates $2.5 billion for planetary science, astrophysics and related work including JWST — this encompasses spectroscopy to study the atmospheres of exoplanets, another way we might find traces of living things on other worlds, though not necessarily intelligent species. And while this figure is less than 1/1000th of the total federal budget in the US, the combined budgets for the SETI effort are a thousand times less than what NASA will spend.

“Of course, if you don’t ante up, you will never win the jackpot,” Shostak concludes, yet another gambling reference in a field that is used to astronomical odds and how we might defeat them. I have to say that Mayr’s analysis makes a great deal of sense to me, and so does Gould’s, but I’m with Shostak anyway. The reason is simple: We have no higher calling than to discover our place in the universe, and to do that, the question of whether or not other intelligent species exist is paramount. I’m one of those people who want to be proven wrong, and the way to do that is with a robust SETI effort working across a wide range of wavelengths.

And working, I might add, across a full spectrum of ideas. Optical SETI complements radio SETI, but we can broaden our SETI hunt to include the vast troves of astronomical data our telescopes are producing day after day. We have no notion of how an alien intelligence might behave, but we can look for evidence not only in transmissions but in the composition of stellar atmospheres and asteroid belts, all places we might find clues of advanced species modifying their environment. It is not inconceivable that we might one day find signs of structures, Dyson spheres or swarms or other manipulations of a solar system’s available resources.

So I’m with the gamblers on this. We may have worked out the Powerball odds, but figuring out the odds on intelligent life is an exercise that needs more than a single example to be credible. I’ll add that SETI can teach us a great deal even if we never find evidence of ETI. If we are alone in the galaxy, what would that say about our prospects as we ponder interstellar expansion? Would we, as Michael Michaud says, go on from this to ‘impose intention on chance?’ I think so, for weighing against our destructive impulses, we have a dogged need to explore. SETI is part of our search for meaning in the cosmos, a meaning we can help to create, nurture and sustain.