To Build the Ultimate Telescope

In interstellar terms, a ‘fast’ mission is one that is measured in decades rather than millennia. Say for the sake of argument that we achieve this capability some time within the next 200 years. Can you imagine where we’ll be in terms of telescope technology by that time? It’s an intriguing question, because telescopes capable of not just imaging exoplanets but seeing them in great detail would allow us to choose our destinations wisely even while giving us voluminous data on the myriad worlds we choose not to visit. Will they also reduce our urge to make the trip?

Former NASA administrator Dan Goldin described the effects of a telescope something like this back in 1999 at a meeting of the American Astronomical Society. Although he didn’t have a specific telescope technology in mind, he was sure that by the mid-point of the 21st Century, we would be seeing exoplanets up close, an educational opportunity unlike any ever offered. Goldin’s classroom of this future era is one I’d like to visit, if his description is anywhere near the truth:

“When you look on the walls, you see a dozen maps detailing the features of Earth-like planets orbiting neighboring stars. Schoolchildren can study the geography, oceans, and continents of other planets and imagine their exotic environments, just as we studied the Earth and wondered about exotic sounding places like Banghok and Istanbul … or, in my case growing up in the Bronx, exotic far-away places like Brooklyn.”

Webster Cash, an astronomer whose Aragoscope concept recently won a Phase I award from the NASA Innovative Advanced Concepts program (see ‘Aragoscope’ Offers High Resolution Optics in Space), has also been deeply involved in starshades, in which a large occulter works with a telescope-bearing spacecraft tens of thousands of kilometers away. With the occulter blocking light from the parent star, direct imaging of exoplanets down to Earth size and below becomes possible, allowing us to make spectroscopic analyses of their atmospheres. Pool data from fifty such systems using interferometry and spectacular close-up images may one day be possible. 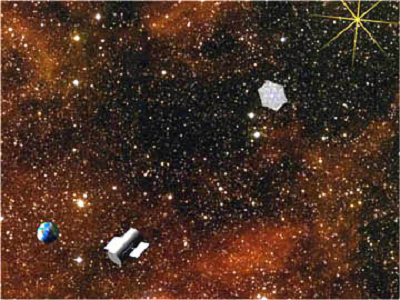 Image: The basic occulter concept, with telescope trailing the occulter and using it to separate planet light from the light of the parent star. Credit: Webster Cash.

Have a look at Cash’s New Worlds pages at the University of Colorado for more. And imagine what we might do with the ability to look at an exoplanet through a view as close as a hundred kilometers, studying its oceans and continents, its weather systems, the patterns of its vegetation and, who knows, its city lights. Our one limitation would be the orbital inclination of the planet, which would prevent us from mapping every area on the surface, but given the benefits, this seems like a small issue. We would have achieved what Dan Goldin described.

Seth Shostak, whose ideas we looked at yesterday in the context of SETI and political will, has also recently written on what large — maybe I should say ‘extreme’ — telescopes can do for us. In Forget Space Travel: Build This Telescope, which ran in the Huffington Post, Shostak talks about a telescope that could map exoplanets with the same kind of detail you get with Google Earth. To study planets within 100 light years, the instrument would require capabilities that outstrip those of Cash’s cluster of interferometrically communicating space telescopes:

At 100 light-years, something the size of a Honda Accord — which I propose as a standard imaging test object — subtends an angle of a half-trillionth of a second of arc. In case that number doesn’t speak to you, it’s roughly the apparent size of a cell nucleus on Pluto, as viewed from Earth.

You will not be stunned to hear that resolving something that minuscule requires a telescope with a honking size. At ordinary optical wavelengths, “honking” works out to a mirror 100 million miles across. You could nicely fit a reflector that large between the orbits of Mercury and Mars. Big, yes, but it would permit you to examine exoplanets in incredible detail.

Or, of course, you can do what Shostak is really getting at, which is to use interferometry to pool data from thousands of small mirrors in space spread out over 100 million miles, an array of the sort we are already building for radio observations and learning how to improve for optical and infrared work on Earth. Shostak discusses a system like this, which again is conceivable within the time-frame we are talking about for developing an actual interstellar probe, as a way to vanquish what he calls ‘the tyranny of distance.’ And, he adds, ‘You can forget deep space probes.’

I doubt we would do that, however, because we can hope that among the many worlds such a space-based array would reveal to us would be some that fire our imaginations and demand much closer study. The impulse to send robotic if not human crews will doubtless be fired by many of the exotic scenes we will observe. I wouldn’t consider this mammoth space array our only way of interacting with the galaxy, then, but an indispensable adjunct to our expansion into it. 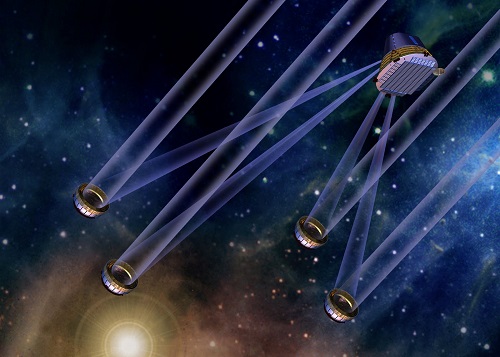 Image: An early design for doing interferometry in space. This is an artist’s concept of the Terrestrial Planet Finder/Darwin mid-infrared formation flying array. Both TPF-I and Darwin were designed around the concept of telescope arrays with interferometer baselines large enough to provide the resolution for detecting Earth-like planets. Credit: T. Herbst, MPIA).

All this talk of huge telescopes triggered the memory of perhaps the ultimate instrument, dreamed up by science fiction writer Piers Anthony in 1969. It was Webster Cash’s Aragoscope that had me thinking back to this one, a novel called Macroscope that was nominated for the Hugo Award in the Best Novel Category in 1970. That’s not too shabby a nomination when you consider that other novels nominated that year were Ursula Le Guin’s The Left Hand of Darkness (the eventual winner), Robert Silverberg’s Up the Line, and Kurt Vonnegut’s Slaughterhouse Five.

The ‘macroscope’ of the title is a device that can focus newly discovered particles called ‘macrons,’ a fictional device that allows Anthony to create a telescope of essentially infinite resolution. He places it on an orbiting space station, from which scientists use it to discover exoplanets, observe alien races and even study their historical records. The macroscope is also a communications device used by intelligent aliens in ways the human observers do not understand. When a signal from a potential Kardashev Type II civilization is observed, a series of adventures ensue that result in discoveries forcing the issue of human interstellar travel.

So much happens in Macroscope that I’ve given away only a few of its secrets. Whether the novel still holds up I don’t know, as I last read it not long after publication. But the idea of a macroscope has stuck with me as the embodiment of the ultimate telescope, one that would surpass even the conjectures we’ve looked at above. Anthony’s macrons, of course, are fictional, but complex deep space arrays and interferometry are within our power, and I think we can imagine deploying these technologies to give us exoplanet close-ups as a project for the next century, or perhaps late in this one. What images they will return we can only imagine.