The heart of the new work, reported by a team of 23 scientists in the August 15 issue of Science, is a dataset collected over ten years by the Radial Velocity Experiment (RAVE). Working with the light of up to 150 stars at a time, the project used the UK Schmidt Telescope in Australia to collect spectroscopic information about them. The resulting maps eventually drew on data from 500,000 stars, allowing researchers to determine the distances of the complex molecules flagged by the absorption of their light in the interstellar medium.

About 400 of the spectroscopic features referred to as ‘diffuse interstellar bands’ (DIBs) — these are absorption lines that show up in the visual and near-infrared spectra of stars — have been identified. They appear to be caused by unusually large, complex molecules, but no proof has existed as to their composition, and they’ve represented an ongoing problem in astronomical spectroscopy since 1922, when they were first observed by Mary Lea Heger. Because objects with widely different radial velocities showed absorption bands that were not affected by Doppler shifting, it became clear that the absorption was not associated with the objects themselves.

That pointed to an interstellar origin for features that are much broader than the absorption lines in stellar spectra. We need to learn more about their cause because the physical conditions and chemistry between the stars are clues to how stars and galaxies formed in the first place. Says Rosemary Wyse (Johns Hopkins), one of the researchers on the project:

“There’s an old saying that ‘We are all stardust,’ since all chemical elements heavier than helium are produced in stars. But we still don’t know why stars form where they do. This study is giving us new clues about the interstellar medium out of which the stars form.” 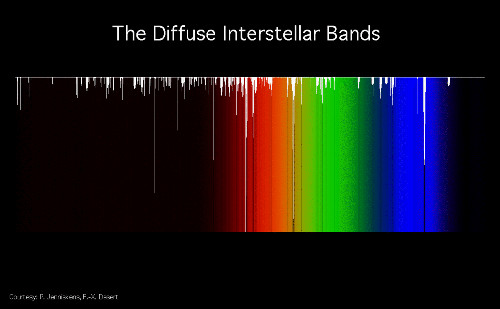 But the paper makes clear how little we know about the origins of the diffuse interstellar bands:

Their origin and chemistry are thus unknown, a unique situation given the distinctive family of many absorption lines within a limited spectral range. Like most molecules in the ISM [interstellar medium] that have an interlaced chemistry, DIBs may play an important role in the life-cycle of the ISM species and are the last step to fully understanding the basic components of the ISM. The problem of their identity is more intriguing given the possibility that the DIB carriers are organic molecules. DIBs remain a puzzle for astronomers studying the ISM, physicists interested in molecular spectra, and chemists studying possible carriers in the laboratories.

The researchers have begun the mapping process by producing a map showing the strength of one diffuse interstellar band at 8620 Angstroms, covering the nearest 3 kiloparsecs from the Sun. Further maps assembled from the RAVE data should provide information on the distances of the material causing a wider range of DIBs, helping us understand how it is distributed in the galaxy. What stands out in the work so far is that the complex molecules assumed to be responsible for these dark bands are distributed differently from the dust particles that RAVE also maps. The paper notes two options for explaining this:

…either the DIB carriers migrate to their observed distances from the Galactic plane, or they are created at these large distances, from components of the ISM having a similar distribution. The latter is simpler to discuss, as it does not require knowledge of the chemistry of the DIB carrier or processes in which the carriers are involved. [Khoperskov and Shchekinov] showed that mechanisms responsible for dust migration to high altitudes above the Galactic plane segregate small dust particles from large ones, so the small ones form a thicker disk. This is also consistent with the observations of the extinction and reddening at high Galactic latitudes.

Working with just one DIB, we are only beginning the necessary study, but the current paper presents the techniques needed to map other diffuse bands that future surveys will assemble.