Streamers of Gravel near Orion Nebula?

I have a soft spot in my heart for the Green Bank Telescope in West Virginia. It’s not just that Frank Drake started Project Ozma on the site in 1960, or that Benjamin Zuckerman and Patrick Palmer ran an Ozma follow-up there in the mid-1970s. I was tracking SETI closely by 1980 or so and knew of these observations, but it was my friend Mike Gingell whose yearly trips to Green Bank kept the place firmly in mind. Like me, Mike was a member of the Society of Amateur Radio Astronomers, and unlike me, he was a highly qualified engineer.

Mike died just last year and I went out to his house to look through a collection of old radio books his wife thought I might be interested in. There in the back yard were three radio dishes, all tuned not for television but for the radio astronomy work Mike was so engaged in. Seeing them already beginning to succumb to foliage — Mike had been ill for some time and couldn’t keep up with them — reminded me strongly of some of J.G. Ballard’s fiction, like 1968’s “The Dead Astronaut,” in which the launch gantries and control rooms of Cape Canaveral have all been abandoned, succumbing to time and spreading sawgrass.

Fortunately for us, the Green Bank Telescope is vibrantly alive, and has just reported on findings that would have had Mike poring over the Monthly Notices of the Royal Astronomical Society, in which they will shortly appear. The big radio dish, the world’s largest fully steerable radio telescope, has been turned to the Orion Molecular Cloud Complex, a star-forming region that is home to the famous Orion Nebula. Star-forming material here is found to be filled with planetary building blocks the size of pebbles. 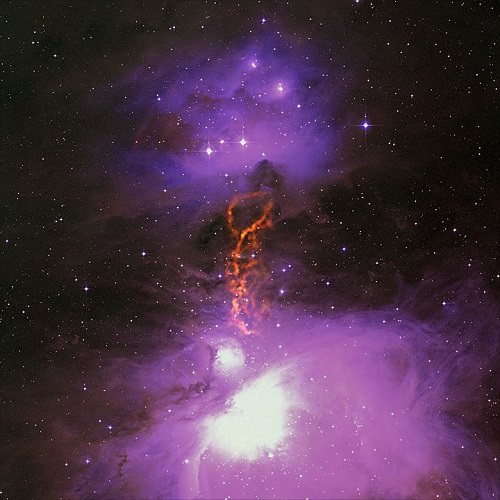 If we can confirm the finding, it will show that objects up to a thousand times larger than the dust grains normally found around protostars may be a new class of mid-sized particles that could make planet formation that much easier to begin. What astronomer Scott Schnee (National Radio Astronomy Observatory) and team have found is an unusually nurturing environment for planets in which some protostars evidently form. The star-forming material here exists in the form of dust-rich filaments dotted with dense knots known as cores.

We’re looking at what, in a million years and perhaps less, will begin to evolve into a star cluster, all within a region called OMC-2/3 in the northern part of the Orion Molecular Cloud Complex. The Green Bank Telescope revealed that the region was shining much brighter than expected in millimeter-wavelength light, based on earlier studies at the IRAM 30 meter radio telescope in Spain. Says Schnee:

“This means that the material in this region has different properties than would be expected for normal interstellar dust. In particular, since the particles are more efficient than expected at emitting at millimeter wavelengths, the grains are very likely to be at least a millimeter, and possibly as large as a centimeter across, or roughly the size of a small Lego-style building block.”

But just how unusual is the finding? The paper on the work comments:

…it will be important to determine if OMC-2/3 is unique in exhibiting large grains or if this is a common feature of star-forming filaments. Although OMC-2/3 is unique in that it has a higher density of starless and protostellar cores than other regions within ~500 pc of the Sun, there are no other properties (mass, density, temperature, etc.) that would lead one to suspect that the dust grains in OMC-2/3 ought to have properties significantly different than those found in other nearby molecular clouds.

If the star-forming filaments, by virtue of their lower temperatures, higher densities and lower velocities (compared to molecular clouds) are themselves the cause of the formation of these large grains, then we may be looking at a population of rocky particles not previously identified at this juncture in stellar evolution, what NRAO astronomer Jay Lockman calls a ‘vast streamer of gravel.’

The other possibility, noted in this NRAO news release, is that the rocky particles observed in OMC-2/3 may have emerged inside earlier protoplanetary disks and have simply escaped back into the surrounding molecular cloud. Whatever the case, the paper points out that there may be other explanations for the bright signature of the OMC emissions, which is why the work continues. This region contains a high concentration of protostars that serve as a laboratory for our study of star formation and the molecular clouds from which they emerge.

The paper is Schnee et al., “Evidence for Large Grains in the Star-forming Filament OMC-2/3,” accepted at Monthly Notices of the Royal Astronomical Society (preprint).

Next post: Red Dwarf Planets: Weeding Out the False Positives