Science fiction writers have a new challenge this morning: To come up with a plot that takes in not just the galaxy and not just the Local Group in which the Milky Way resides, but the far larger home of both. Laniakea is the name of this supercluster, after a Hawaiian word meaning ‘immense heaven.’ And immense it is. Superclusters are made up of groups like the Local Group — each of these contain dozens of galaxies — and clusters that contain hundreds more, interconnected by a filamentary web whose boundaries have proven hard to define.

Where does one supercluster begin and another end? As explained in a cover story in the September 4 issue of Nature, an emerging way to tune up our cosmic maps is to look at the effect of large-scale structures on the movements of galaxies. A team under R. Brent Tully (University of Hawaii at Manoa) has been using data from radio telescopes to study the velocities of 8000 galaxies, adjusting for the universe’s accelerating expansion to create a map of the cosmic flow of these galaxies as determined by gravitational effects.

This is how our horizons get adjusted. Previously we thought of the Milky Way as part of the Virgo Supercluster, but now we see even this region as just part of the far larger Laniakea Supercluster. We’re talking about a structure some 520 million light years in diameter that contains the mass of one hundred million billion suns across a staggering 100,000 galaxies. And just as the Sun is in the galactic ‘suburbs’ of the Milky Way, a long way from the galaxy’s teeming center, so the Milky Way itself lies on the outskirts of the Laniakea Supercluster. 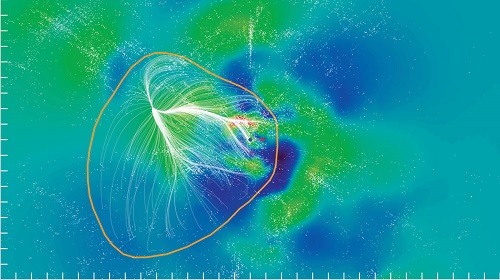 Image: A slice of the Laniakea Supercluster in the supergalactic equatorial plane — an imaginary plane containing many of the most massive clusters in this structure. The colors represent density within this slice, with red for high densities and blue for voids — areas with relatively little matter. Individual galaxies are shown as white dots. Velocity flow streams within the region gravitationally dominated by Laniakea are shown in white, while dark blue flow lines are away from the Laniakea local basin of attraction. The orange contour encloses the outer limits of these streams, a diameter of about 160 Mpc. This region contains the mass of about 100 million billion suns. Credit: SDvision interactive visualization software by DP at CEA/Saclay, France.

Those of us with an interest in Polynesia will love the name Laniakea, which was chosen to honor the Polynesian sailors who used their deep knowledge of the night sky to navigate across the Pacific. If you look through the essays in Interstellar Migration and the Human Experience (University of California Press, 1985), you’ll find several that dwell on the historical example of the Polynesian navigators as a way of examining future migration into the stars. The theme resonates and I invariably hear it mentioned at the various conferences on interstellar flight.

The diagrams below offer another way of viewing the gravitational interactions that pull together the immense supercluster. You’ll notice the Great Attractor, a gravitational focal point that influences the motion of galaxy clusters including our own Local Group. The NRAO refers to it as a ‘gravitational valley’ whose effects can be felt across the Laniakea Supercluster. 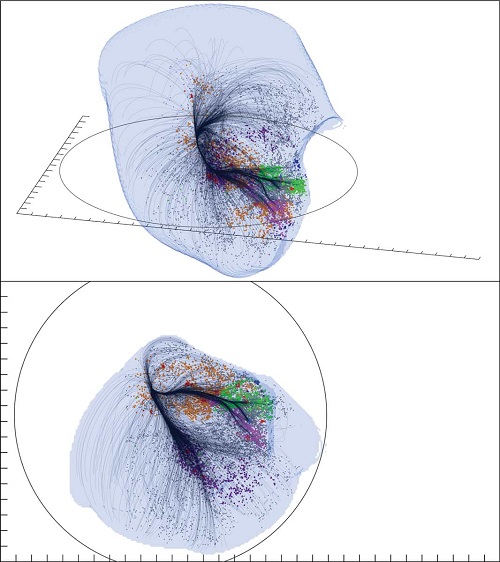 Image: Two views of the Laniakea Supercluster. The outer surface shows the region dominated by Laniakea’s gravity. The streamlines shown in black trace the paths along which galaxies flow as they are pulled closer inside the supercluster. Individual galaxies’ colors distinguish major components within the Laniakea Supercluster: the historical Local Supercluster in green, the Great Attractor region in orange, the Pavo-Indus filament in purple, and structures including the Antlia Wall and Fornax-Eridanus cloud in magenta. Credit: SDvision interactive visualization software by DP at CEA/Saclay, France.

Have a look at this video from Nature to see the whole supercluster set in motion.

So now we know that our home supercluster is actually 100 times larger in volume and mass than we previously thought. In an article summarizing these findings in Nature, Elizabeth Gibney points out that a somewhat different definition of a supercluster is being used by Gayoung Chon (Max Planck Institute for Extraterrestrial Physics, Germany) and colleagues, who base their definition on structures that will one day collapse into a single object, something that cannot be said for Laniakea because some of its galaxies will always move away from each other. Clearly, the definition of a supercluster is a work in progress, but let’s hope the name sticks.