A Deep Probe of Planet Formation

Surrounding the star HD100546, some 335 light years from Earth in the southern hemisphere constellation Musca (The Fly), is a cloud of gas and dust in the shape of a disk. The young star is 30 times brighter than the Sun and about 2.5 times as large. Sean Brittain (Clemson University) and team have now discovered a newly forming planet within the disk, one believed to be a gas giant about three times the size of Jupiter, 13 AU from the host star. They may also have discovered a circumplanetary disk around the newly forming planet.

At work here is a technique called spectro-astrometry, about which a few words. Spectroscopic observations can tell us much about what is happening around young stars, producing data on their motion and helping to resolve close binaries. What becomes problematic with spectroscopy, though, is the need being to improve angular resolution and find ways around the problems created by observing through the Earth’s atmosphere. We don’t yet have the resolution to see how jets form in young stars, for example.

Spectro-astrometry gets around this problem by allowing astronomers to work on scales below the normal limit on resolution set by their equipment. First developed in the early 1980s, the technique compares the positions of objects through different filters, teasing out information at smaller scales by combining the angular position at two different wavelengths. In a paper on the method by Emma Whelan and Paolo Garcia (citation below), the authors describe it as ‘a combination of spectroscopy and astrometry,’ spectroscopy being the analysis of radiation intensity as a function of wavelength, and astrometry the measurement of the precise movements of stars.

Sean Brittain and team used spectro-astrometry by studying tiny changes in the position of carbon monoxide emissions, finding a source of excess carbon monoxide that varies in position and velocity. Because the changes are consistent with orbital motion around the star, the team believes it is seeing emission from a circumplanetary disk of gas orbiting the forming planet. “Another possibility,” adds Brittain, “is that we’re seeing the wake from tidal interactions between the object and the circumstellar disk of gas and dust orbiting the star.”

“We stumbled onto this project when a paper in the literature predicted that forming planets would induce a detectable signature in the CO emission from disks. Because we had studied HD100546 for many years, we could immediately test this idea in one system. It was uncanny that the first system we studied actually showed the signature of orbital motion. It’s not every day that you look for something exciting and actually find it! But the test of any interpretation is to make a prediction and see if it is verified. We are thrilled that the data recently reported confirm the signature of orbital motion that we predicted based on our earlier work.” 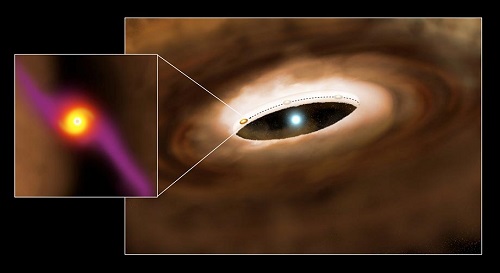 Image: An artist’s conception of the young massive star HD100546 and its surrounding disk. A planet forming in the disk has cleared the disk within 13AU of the star, a distance comparable to that of Saturn from the sun. As gas and dust flows from the circumstellar disk to the planet, this material surrounds the planet as a circumplanetary disk (inset). These rotating disks are believed to be the birthplaces of planetary moons, such as the Galilean moons that orbit Jupiter. While they are theoretically predicted to surround giant planets at birth, there has been little observational evidence to date for circumplanetary disks outside the solar system. Brittain et al. (2014) report evidence for an orbiting source of carbon monoxide emission whose size is consistent with theoretical predictions for a circumplanetary disk. Observations over 10 years trace the orbit of the forming planet from behind the near side of the circumstellar disk in 2003 to the far side of the disk in 2013. These observations provide a new way to study how planets form. Credit: P. Marenfeld & NOAO/AURA/NSF.

The idea of a circumplanetary disk around a young gas giant is not unusual, as it would act as the breeding ground for systems of planetary moons like those around Jupiter and Saturn. To my knowledge, however, this would be the first time one has been observed. HD100546 has previously produced evidence of another planet in formation, one at about the distance of Pluto from the Sun that appears to be a gas giant of roughly Jupiter mass. John Carr (Naval Research Laboratory) is a co-author on the paper describing these findings:

“The possibility that we have caught a planet in the act of formation is an exciting result. What makes this work doubly interesting is the evidence that we are seeing gas as it swirls around and flows onto the planet to feed its continuing growth. This could be observational confirmation for the existence of circumplanetary disks that are predicted to surround giant planets at birth. An important point in this research is that we were able to track the object over a period of several years and show that it is indeed orbiting around the star as expected for a planet.”

So we are evidently looking at a solar system engaged in the birth of multiple planets, showing signs of the disk formation that may one day result in stable worlds, each circled by its own system of moons. Up next for HD100546 will be close inspection through instruments like the European Southern Observatory’s Very Large Telescope or the Gemini South Telescope as we probe this useful celestial laboratory of planet formation.

The paper is Brittain et al., “NIR Spectroscopy of the HAeBe Star 100546. III. Further Evidence of an Orbiting Companion?” The Astrophysical Journal 791 (2014), 136 (preprint). The Whelan and Garcia paper on spectro-astrometry is “Spectro-astrometry: The Method, its Limitations and Applications,” in Jets from Young Stars II, Lecture Notes in Physics Volume 742 (2008), pp. 123-149. A Clemson University news release is also available.