Gatherings like the 100 Year Starship Symposium have tough organizational choices to make, and the solutions aren’t always obvious. A good part of any aerospace conference is involved in presenting papers, but do you set up a multi-track system or take a single-track approach? In Houston, the 100 Year Starship organization chose multiple tracks: We had, for example, a track on Life Sciences, one on Data Communications, another on Propulsion & Energy, and there were several others including a useful track on Interstellar Education.

The problem is that with all these tracks running at once, it was a matter of picking and choosing, and that often meant getting up after a presentation, switching rooms, and entering another track. I missed papers in Kathleen Toerpe’s Education track that I wanted to hear because I needed to hear many of the Propulsion & Energy papers, and while I caught a paper in the Becoming an Interstellar Civilization track, it was at the expense of some promising offerings in another track called Uncharted Space & Destinations.

This is how many conferences operate and it allows for a greater number of papers, but I was glad that the symposium also opened up for plenary sessions, one of which, called State of the Universe, was a discussion between Jill Tarter (SETI Institute) and Mason Peck (Cornell University). Tarter’s lengthy involvement in SETI brings particular weight to her insights, and Centauri Dreams readers already know about my admiration for Peck’s work on the miniaturized ‘satellite on a chip’ designs he and his team call ‘Sprites.’ I’m convinced that shrinking payloads through such technologies is a promising path toward interstellar missions.

KickSat was a plan to take a large number of Sprites into orbit aboard a CubeSat, although the initial attempt failed when, after a launch in April of this year as part of an ISS re-supply mission, the CubeSat orbited and re-entered without deploying the nanosatellites. But the technology is fascinating. Peck refers to Sprites as ‘Sputnik on a microchip,’ and we can think of them as robotic precursor missions on a very small scale, an economic approach to exploration. A swarm of cheap Sprites could be deployed, for example, from a CubeSat solar sail mission to an outer planet, replacing telescope imagery with direct sensor readings.

But Tarter pressed Peck on astrobiology, where for our immediate purposes, Sprites aren’t going to offer the flexibility of today’s large rovers on places like Mars. How do we cope with the need to keep the costs of large missions down? The commercial sector, as well as crowdsourced funding, came up again and again. In Peck’s words:

“For Mars, the long range plan is a sample return mission. To keep the prices as low as possible, what if we buy the science? Rather than having an agency declare the boundaries of a science mission, why not offer a prize per gram of Martian soil? Let companies bid and bring economics into play. If no one rises to the challenge, no money is spent.” 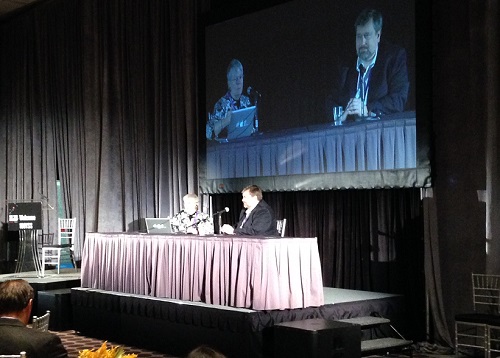 Tarter was interested in what she called a ‘mega-Kickstarter from the world’ as a funding source for another kind of technology, a starshade. In reports for the NASA Institute for Advanced Concepts a few years back (still available at the NIAC site), Webster Cash (University of Colorado at Boulder) outlined the possibilities. Even the largest planets are invariably drowned out by the glare of the parent star, but a starshade approximately 20,000 kilometers away from a large space instrument like the James Webb Space Telescope uses a highly-refined ‘flower-petal’ architecture to filter out the starlight, leaving the telescope with photons from the exoplanet itself. That makes spectroscopy possible, allowing us to study the constituents of a planetary atmosphere.

Starshades are big and have to be deployed, which led Tarter to her next question: Given the kind of miniaturized technology Peck was already working with, couldn’t we make a starshade out of a swarm of smaller objects? The problems are daunting, and include keeping the surface of these structures precise enough to prevent problems with diffraction that can cloud the image. Even so, Peck noted the radical change that computation has brought to optics in the last few years, offering hope of dealing with the optics of widely distributed systems.

And I love this idea: We have places in the Solar System like Enceladus, Europa and Triton, where cryovolcanoes are known to exist. What Tarter calls a ‘shortcut to a sample return’ is to fly a swarm of Sprites through material these cryovolcanoes are throwing into space. Peck’s response:

“I don’t see why not. Small sensors could be distributed throughout this environment. If you fly hundreds — or millions — of Sprites through a geyser, you hedge your bets for survival. Even better, you get spatially and temporally distributed sets of measurements that make a different kind of science possible. It’s a ‘village’ of satellites rather than a single big spacecraft that has to work or you lose the mission. A swarm offers a stochastic or random look at the target.”

The Assumptions of SETI

When the conversation turned to SETI, Tarter talked about current work in the radio and optical part of the spectrum and the need to move to larger apertures and greater computing power, noting that SETI would be part of the Square Kilometer Array that will go online in the 2023-2025 timeframe. In optical wavelengths, the coming generation of instruments like the European Extremely Large Telescope and the Thirty Meter Telescope might have places in the focal plane where SETI detectors could be deployed.

Peck wanted to know whether the assumption was that other civilizations are trying to contact us, or would it be possible to pick up accidental transmissions. Tarter’s response:

“We assume most of the gain is in the transmitter, so receivers don’t need to be as powerful. But in the case of other kinds of signals, those that are not deliberate — think of large astro-engineering programs, for example — any leakage is going to be extremely weak. For these we would have to build the gain into the receivers. But putting huge amounts of money into a single area doesn’t seem the right way to go. Better to do more small but different things. For now, the philosophy is to go for deliberate signals and try to be affordable.”

Driving the push into optical wavelengths has been our own experience. Peck likens the way we currently communicate and return data from spacecraft to ‘exploring the universe with a dial-up modem.’ We have low communications bandwidth and leave about 85 percent of the images we collect on Mars. Improving communications by a factor of ten through laser methods would allow far greater science return. And if we find lasers valuable, wouldn’t other civilizations come to the same conclusion? A large aperture doing individual photon counting can detect a very distant signal.

I liked the note the session ended on, the idea that working on a distant goal like a starship can have wide impact on Earth in the near future. Tarter noted that we’re going to have a large number of megacities before long, teeming with populations of 20 million or more each. Everything we need to learn about maintaining stable life support systems for a starship flows as well into how to keep such cities alive and healthy. Cities as starships. We don’t always plan the solutions that work, but experience has shown how often they emerge from pushing into the unknown.