Primordial Origins of (Some) of Earth’s Water

With one interstellar conference in the books for 2014, I’ll be headed next for the Tennessee Valley Interstellar Workshop, whose upcoming gathering will be held in Oak Ridge this November. Last week’s coverage of the 100 Year Starship Symposium in Houston has allowed several interesting stories to back up in the queue, and I’ll spend the next few days going over some of the latest findings, starting with the discovery that a large fraction of the water in Earth’s oceans may be substantially older than we think. The results make a strong case for water as a common ingredient in planet formation no matter where the planet forms or around what kind of star.

Ilsedore Cleeves (University of Michigan) is lead author on the new paper in Science that argues the case. What Cleeves and colleagues have found is that up to half of the water in our Solar System formed before the Sun itself emerged from the primordial gas and dust cloud that gave it birth. That encompasses more than the Earth’s oceans, of course, because we know that water is found in places as widely disparate as Mercury, the Moon, on comets, and on the moons of gas giants. The question the new work answers is the sequence in which that water forms. Cleeves explains the issue:

“There has been a long-standing question as to whether any of these ancient ices, including water, are incorporated into young planetary systems, or if all the pre-planetary building blocks are reprocessed and/or locally synthesized near the star.

“These two scenarios have very different consequences for the composition of planets. In the latter case, the chemical make-up of the planets, including water, would depend upon what type of star a planet ends up next to. In contrast, the former case implies that all planetary systems would form from similar starting materials, including abundant interstellar water.” 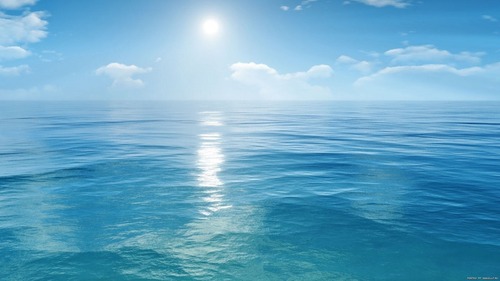 Image: How common are views like this in the galaxy? New work out of the University of Michigan indicates that water in the interstellar medium survives solar system formation and can contribute to the planets that emerge, an opportunity available to all nascent stellar systems.

The researchers studied the question using deuterium, or heavy hydrogen, which is an isotope of hydrogen with a proton and a neutron in the nucleus (ordinary hydrogen has no neutron in the nucleus). On the Earth, deuterium’s abundance is one atom for every 6,420 of hydrogen. This ratio, found not only on Earth but also in comets, is higher than the ratio in the Sun. In fact, deuterium-enriched water should form at temperatures only 10 degrees above absolute zero. Ted Bergin, a University of Michigan astronomer, explains the implication:

“Chemistry tells us that Earth received a contribution of water from some source that was very cold — only tens of degrees above absolute zero, while the Sun being substantially hotter has erased this deuterium, or heavy water, fingerprint.”

Simulating chemical evolution in a planetary disk over a million year period, Cleeves found that the processes at work in the disk were insufficient to make the heavy water that exists throughout the Solar System. Thus the first scenario above is likely — the planetary disk didn’t make all the system’s water but acquired much of it from elsewhere. Deuterium enrichment happens not only under cold temperatures but in the presence of oxygen and ionizing radiation. All of these are found in the interstellar medium, where the radiation is provided by cosmic rays, and deuterium-enriched water has indeed been observed in the ISM.

Like the interstellar medium, the young planetary disk would also offer up radiation, even if the cosmic ray count would drop because of the growing star’s magnetic field and stellar wind. But the process cannot yield heavy water in the amounts needed. From the paper:

With our updated disk ionization model, we can now exclude chemical processes within the disk as an enrichment source term and conclude that the solar nebula accreted and retained some amount of pristine interstellar ices. One potential explanation is that during the formation of the disk, there was an early high temperature episode followed by continued infall from deuterium-enriched interstellar ices.

The numbers that flow out of this work show that 30 to 50% of the water in Earth’s oceans and between 60 to 100% of the water in comets comes from water predating the Sun, arriving as interstellar ices that survived the Solar System’s formation and were incorporated into the various planets and other bodies. The implication is that a fundamental prerequisite for life as we know it is available to all planetary systems in formation. Water is ‘inherited’ from the immediate environment of an emerging planetary system and is therefore widespread elsewhere in the universe, locked up in the ices, gas and dust circling the infant star.

“This is a very interesting result. We’ve been debating this for years, whether or not the ices have an interstellar heritage”… She says that other groups have tried to model the collapse of clouds in the ISM into planetary systems to see if ice would survive, but “with various results, that don’t always agree,” Willacy says. “This is much more simple approach, just using the chemistry which is well understood.”

This news release from the University of Exeter is also helpful.