If our exoplanet hunters eventually discover an Earth-class planet in the habitable zone of its star — a world, moreover, with interesting biosignatures — interest in sending a robotic probe and perhaps a human follow-up mission would be intense. In fact, I’m always surprised to get press questions whenever an interesting exoplanet is found, asking what it would take to get there. The interest is gratifying but I always find myself having to describe just how tough a challenge a robotic interstellar mission would be, much less a crewed one.

But we should keep thinking along these lines because the odds are that exoplanetary science may well uncover a truly Earth-like world long before we are in any position to make the journey. I would expect public fascination with such a discovery to be strong. Dana Andrews (Andrews Space, now retired) has been pondering these matters and recently forwarded a paper he presented at the International Astronautical Congress meeting in Toronto in early October. It’s an intriguing survey of what could be done in the near-term.

How we define ‘near-term’ is of course the key here. Is fusion near-term or not? Let’s think about this in context of the mission Andrews proposes. He’s looking at a minimum transit speed of 2 percent of the speed of light (fifty years per light year), making for transit times in the neighborhood of hundreds of years, depending on destination. A key requirement is the ability to decelerate and rendezvous with the destination planet using a magnetic sail (magsail) that can be built using high-temperature superconductors. Andrews also assumes 20-30 years of research and development before construction actually begins.

The R&D alone takes us out to, say, 2040, but there are other factors we have to look at. As Andrews also notes, we have to assume that a space-based infrastructure sufficient to begin active asteroid mining will be in place, for it would be needed to build any of the systems we can imagine to make a starship. He cites a thirty-five year timeframe for getting these needed systems operational. Some of the R&D could presumably be underway even as this infrastructure is being built, but we also have to take into account what we know about the destination. Remember, it’s the Earth-like world discovery that sets all this in motion.

The ability to detect not just biosignatures but data of the kind needed for a human mission to an Earth-class planet may take twenty years or more to develop, and I think even that is a highly conservative estimate. For naturally we’re not going to launch a mission unless we have not just a hint of a biosignature but solid data about the world to which we are committing the mission. That might mean instruments like a starshade and perhaps interferometric techniques by a flotilla of observatories to pull up information about the planet’s surface, its continents and seas, and its compatibility to Earth-like life.

I’d say that backs us off at least to the mid-2030’s just for the beginning of exoplanet analysis of the destination, after which the planet is declared suitable and mission planning can begin. What technologies, then, might be available to us to begin interstellar R&D for a specific starship mission in, say, 2045, when we may conceivably have such detailed data, aiming at a 2070 departure if all goes well? Andrews doubts that high specific impulse, low power density fusion rockets will be available within the century, if then, and thinks that antimatter, if it ever becomes viable for interstellar propulsion, will follow fusion. That leaves us with a number of interesting alternatives that the paper goes on to analyze.

An Interstellar Point of Departure

Andrews develops an interesting take on using space-based lasers, working in combination with four-grid ion thrusters using hydrogen propellant and optimized for a boost period of thirty-two days. The specific impulse is 316,000 seconds. The lasers are mounted on a small asteroid (one or two kilometers) and take advantage of a 500-meter Fresnel lens that directs their beam to a laser reflector on the spacecraft. Let me take this directly out of the paper:

An actively steered 500 m diameter Fresnel lens (risk scale 3) directs the beam to the laser reflector on the Generation Ship Spacecraft, where it is focused onto hydrogen-cooled solar panels (risk factor 1), using a light-pressure supported ¼ wave Silicon Carbide reflector (risk factor 2.5). The light conversion panels operate at thousands of volts at multiple suns (risk factor 2) to allow direct-drive of four-grid Ion thrusters using hydrogen propellant and optimized for short life (30 days) and very low weight (risk factor 3). The four-grid thrusters provide a Specific Impulse (Isp) of 316,000 seconds operating at 50,000 volts using hydrogen. The triple point liquid hydrogen propellant is stored in the habitat torus during boost (the crew rides in the landing pods for the duration of the 32 day boost period), so there is no mass for propellant tanks. After acceleration the crew warms up the insulated torus, fills it with air, and moves in.

The ‘risk factors’ mentioned above refer to a ranking of relative risk for the development of various technologies that Andrews introduces early in the paper. Low Earth Orbit tourism, for example, ranks as a risk factor of 1, with development time in 10 years. Faster than light transport ranks as a risk factor 10, with development time (if ever) of over 1000 years. Low risk factor elements within the needed time-frame include asteroid-based mining and possible colonies, gigawatt-level beamed power, thorium fluoride nuclear space power and — this is critical for everything that follows — fully closed-cycle biological life support systems. 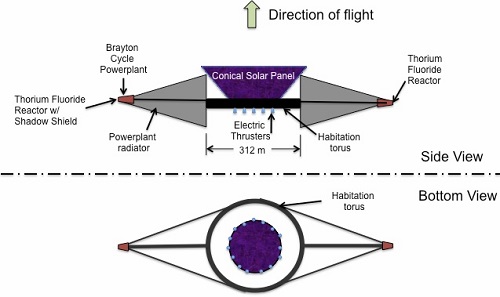 The habitation torus is assumed to be 312 meters in radius, rotating at two revolutions per minute to provide artificial gravity for the crew. The paper assumes a crew of 250, selected to provide differing skillsets and large enough to prevent problems of inbreeding — remember, we’re talking about a generation ship. The craft uses two thorium fluoride liquid reactors to provide power, acting as breeder reactors to reprocess fuel during the mission. Andrews comments:

The challenge to the spacecraft designer is to include everything needed within the 4000 mT allocated for end of thrust… This design closes but there is very little margin. For instance, there is only 15% replacement air and only 200 kg of survival equipment per person. All generation ships here use the same basic habitat and power systems.

The magsail needed for deceleration takes, by Andrews’ calculations, 73 years to slow from 2 percent of c, with deployment at approximately 17000 AU from a star like the Sun, with the goal of entering orbit around the star at 3 AU, after which time the magsail can be used to maneuver within the system. Electric sails seem to work for operating inside the stellar wind, but Andrews notes that their mass scales linearly with drag, whereas a magsail’s mass scales as the square root of the drag desired. The magsail is thus the lighter option for this mission, envisioned here as a 6000 kilometer sail using high temperature superconductors, a technology the author believes will fit the proposed chronology.

The propulsion methods outlined here are what Andrews calls a “straw man point of departure (PoD) design,” with other near-term propulsion possibilities enumerated. Tomorrow I’ll take a look at these alternatives, all of them relatively low on the paper’s risk scale. The paper is Andrews, “Defining a Near-Term Interstellar Colony Ship,” presented at the IAC’s Toronto meeting and now being submitted to Acta Astronautica.

Previous post: How Common Are Potential Habitable Worlds In Our Galaxy?