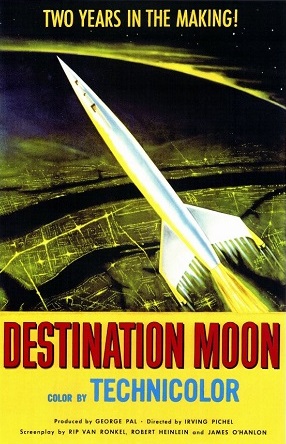 Back in 1950, George Pal produced Destination Moon, a movie that was based (extremely loosely) on Robert Heinlein’s Rocketship Galileo. Under the direction of Irving Pichel, the film explained the basics of a journey to the Moon — using among other things an animated science lesson — to a world becoming intrigued with space travel. I’ve wondered in the past whether we might one day have an interstellar equivalent of this film, a look at ways of mounting a star mission in keeping with the laws of classical mechanics. Call it Destination Alpha Centauri or some such and let’s see what we get.

Christopher Nolan’s film Interstellar doesn’t seem to be that movie, at least based on everything I’ve seen about it so far. I did think the early trailers were interesting, evoking the human urge to overcome enormous obstacles and buzzing with a kind of Apollo-era triumphalism. The most recent trailer looks like starflight is again reduced to magic, although maybe there will be some attempt to explain how what seems to be wormhole transit works. While we wait to find out, I still wonder about what kind of mission we would mount if we really did have a world-ending scenario on our hands that demanded an interstellar trip soon.

[Addendum]: I’ve been reminded that Kip Thorne has a hand in the science of this film, which does make me more interested in seeing it.]

Dana Andrews, as we saw yesterday, has been exploring a near-term interstellar colony ship that could fit into this scenario. Today I want to return to the paper he presented at the recent International Astronautical Congress. Andrews defines near-term this way:

Near-term means we can’t use warp drive, fusion engines, or multi-hundred terawatt lasers (which could destroy civilization on Earth in the wrong hands). Affordable means we’re going to do design and cost trades and select the lowest risk option with reasonable costs…. The goal was to design the system with state of the art technologies, assuming there will be twenty to thirty years of Research and Development before we start construction.

I speculated yesterday that given the need for a robust space-based infrastructure, it was hard to see the methods Andrews studies being turned to the construction of an actual starship before at least 2070, but it’s probably best to leave chronologies out of the picture since every year further out makes prediction that much more likely to be wrong.

The ‘straw man point of departure’ design in Andrews’ paper invoked beamed lasers mounted on an asteroid for risk stabilization and momentum control, with a 500 meter Fresnel lens directing the beam to the spacecraft’s laser reflectors, where it is focused on solar panels to power up ion thrusters using hydrogen propellant. A 32-day boost period gets the mission underway and a magsail is used to slow from 2 percent of c upon arrival. Andrews is assuming a laser output of around 100 TW to make this system work.

But the point-of-departure method is only one possibility Andrews addresses. He also looks at Jordin Kare’s Sailbeam concept, in which a large laser array (250 5.8 TW lasers) accelerates, one after another, a vast number of 20 centimeter spinning microsails. The acceleration is a blinding 30 million gees over a period of 244 milliseconds, with the ‘beam’ being kept tight during the brief acceleration by using ‘fast acting off axis lasers,’ and additional lasers downrange. Only for the first 977 kilometers are the sails actually under the beam.

Notice the requirement for keeping the beam tight, an issue that has bedeviled concepts from laser-pushed lightsails to particle beam acceleration. After all, beam spread means you can’t deliver the bulk of the required power to the vessel that needs its energies. Assuming a tight microsail beam, however, the huge boost delivered at the beginning is sufficient, according to Kare’s numbers, to produce serious thrust for the starship. The beam reaches the ship, which vaporizes and ionizes the incoming sails by its own laser system, creating a plasma pulse that drives a magsail. Numerous issues arise with this method, as Andrews describes:

250 micro sails per second amounts to 3.2 kg/sec, and that requires 150 to 300 MW of laser power to ionize the microsails. Assuming 50% efficient lasers we need about a gigawatt of thermal power. Assuming risk factor three, that’s about 1000 mT of powerplant mass, which is actually less than the laser-powered ion propulsion system.

Could we beam the needed power to the ship? Perhaps, but there are other problems:

To maintain 0.01 gee with 250 microsails/second as the spacecraft approaches 2% c, we need to accelerate each microsail for 0.18 seconds. Since we assume each microsail launcher needs about 0.5 seconds to place, align, and spin up its microsail, we don’t need to increase the number of laser launchers to maintain the 0.01 gee. The problem is the long (730 day) acceleration time, which results in end of boost at 1238 AU. This requires very small sailbeam divergence (< Nano radian). 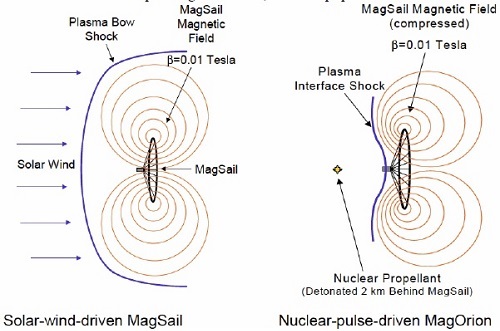 With regard to the divergence problem, you’ll remember our recent discussions about neutral particle beams, which occurred in the context of Alan Mole’s paper in JBIS on a small interstellar probe. Mole, in turn, had drawn on earlier work by Andrews in 1994. In that paper, Andrews described a 2000 kilogram probe driven by a neutral particle beam sent to a magsail (the same magsail would be used for deceleration in the destination system). Writing in these pages, James Benford later found this propulsion method inapplicable for interstellar uses because of unavoidable spread of the beam and a corresponding loss of efficiency, although he considered it quite interesting as a driver for fast interplanetary travel.

In the current paper, Andrews revisits particle beam propulsion as a third alternative to the ion thrusters in his point-of-departure design. He cites Benford’s critique in the footnotes and goes on to add that the divergence of the beam will limit the useful range of operation. That implies high accelerations at the beginning of the flight, when the spacecraft can exploit maximum power from the beam as it meets the required divergence angle requirements. To catch up on our Centauri Dreams discussions of these issues, start with The Probe and the Particle Beam and Sails Driven by Diverging Neutral Particle Beams, both of which launched discussions and follow-up articles that can be found in the archives.

But there is a final possibility, the laser-driven lightsail as envisioned by Robert Forward back in the 1960s and refined by him in numerous papers in the years following. Which of these best fits our need to launch a near-term mission aboard a crewed starship? More on the laser lightsail and Andrews’ thoughts on energy requirements when I wrap up the paper tomorrow.

The paper is Andrews, “Defining a Near-Term Interstellar Colony Ship,” presented at IAC 2014 (Toronto) and in preparation for submission to Acta Astronautica. The earlier Andrews paper is “Cost considerations for interstellar missions,” Acta Astronautica 34, pp. 357-365,1994. Alan Mole’s paper is “One Kilogram Interstellar Colony Mission,” Journal of the British Interplanetary Society Vol. 66, No. 12, 381-387 (available in its original issue through JBIS).