The Emergence of Solitary Stars

Looking at the latest work from Carnegie’s Alan Boss reminds me once again of the crucial role computers play in astrophysical calculations. We’re so used to the process that we’ve come to take it for granted, but imagine where we’d be without the ability to model complex gravitational systems. To understand planet formation, we can simulate a protoplanetary disk around a young star and let a billion years pass in front of our eyes. And as our models improve, we can set the process in motion with ever greater fidelity.

Read Caleb Scharf’s The Copernicus Complex ( Farrar, Straus and Giroux, 2014) to see how much we’ve learned by ever more precise modeling. Back in the late 1980s, Jacques Laskar (Bureau des Longitudes, Paris), Gerald Sussman and Jack Wisdom (the latter two at MIT) developed mathematical approaches that could track changes to orbital motions to understand our solar system’s past. Their work and the wave of innovation that followed helped us understand exponential divergence over million-year time periods, a crucial factor, as Scharf shows, in how unpredictable planetary motions can be:

Newton’s physics and its application by scientists like Laplace had appeared to be describing a clockwork universe, a reality based on laws that could always lead you from point A to point B, through space and time. And although the concepts of chaos and nonlinearity were well-known by the time these numerical computer experiments were carried out on planetary motions, this was the first real confirmation that our solar system was neither clockwork nor predictable.

In other words, when dealing with astronomical time-frames, we begin to find outcomes that could not have been predicted as we run our simulations. We’re observing chaos at play in complex gravitational systems, where tiny interactions can ultimately change the trajectories of entire planets. Scharf’s discussion of these matters celebrates the computer’s ability to model these phenomena and observe different results, but it’s also a humbling reminder of our limitations in thinking that with enough information we can always predict the outcome.

What Alan Boss is modeling is the formation of stars, using three-dimensional models of the collapse of magnetic molecular cloud cores. His simulations depict the formation of stars as clusters of newly formed protostars come apart. What they show is that younger star and protostar populations have a higher frequency of multiple-star systems than older ones. In other words, many single-star systems like our own start out as multi-star systems, with stars being ultimately ejected to achieve stability. You can see the modeling at work below. 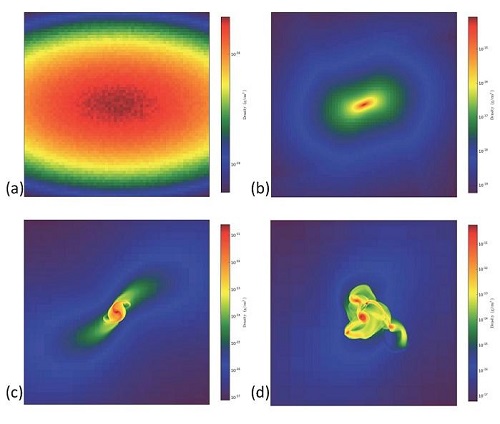 Image: The distribution of density in the central plane of a three-dimensional model of a molecular cloud core from which stars are born. The model computes the cloud’s evolution over the free-fall timescale, which is how long it would take an object to collapse under its own gravity without any opposing forces interfering. The free-fall time is a common metric for measuring the timescale of astrophysical processes. In a) the free-fall time is 0.0, meaning this is the initial configuration of the cloud, and moving on the model shows the cloud core in various stages of collapse: b) a free-fall time of 1.40 or 66,080 years; c) a free-fall time of 1.51 or 71,272 years; and d) a free-fall time of 1.68 or 79,296 years. Collapse takes somewhat longer than a free-fall time in this model because of the presence of magnetic fields, which slow the collapse process, but are not strong enough to prevent the cloud from fragmenting into a multiple protostar system (d). For context, the region shown in a) and b) is about 0.21 light years (or 2.0 x 1017 centimeters) across, while the region shown in c) and d) is about 0.02 light years (or 2.0 x 1016 cm) across. Credit: Alan Boss.

The calculations produce clumps with masses in the range of ~0.01 to 0.5 M⊙, clumps which will continue to accrete mass and interact gravitationally with each other. It can be expected that the multiple systems will undergo dramatic subsequent orbital evolution, through a combination of mergers and ejections following close encounters, resulting ultimately in a small cluster of stable hierarchical multiple protostars, binary systems, and single protostars. Such evolution appears to be necessary in order [to] produce the binary and multiple star statistics that hold for the solar-type stars in the solar neighborhood…

Those statistics are striking. Roughly two-thirds of the stars within 81 light years of the Earth are either binary or part of multi-star systems. And because what we see today as single stars can also be the result of ejection from a multi-star system, the formation of binary and multi-star systems seems to be commonplace. I’m interested in these findings because if we are to understand our own place in the cosmos, we’re beginning to see that we have to account for why single-star systems do not seem to be the default in the Milky Way.

The paper is Boss and Keiser, “Collapse and Fragmentation of Magnetic Molecular Cloud Cores with the Enzo AMR MHD Code. II. Prolate and Oblate Cores,” in press at The Astrophysical Journal (preprint).

Next post: A Planet Each for Stars in Binary System