A Test Case for Astroengineering

Last year the New Frontiers in Astronomy & Cosmology program, set up by the John Templeton Foundation as a grant-awarding organization, dispensed three grants with a bearing on what Clément Vidal calls ‘Zen SETI.’ The idea of looking into our astronomical data and making new observations to track possible signs of an extraterrestrial civilization at work is not new, and yesterday we looked at Freeman Dyson’s early contribution. Carl Sagan and Josif Shklovskii are also among those in a lineage we can extend back at least to the early 20th Century.

The recent grants show a gathering momentum for extending SETI in new directions. The team of Jason Wright (Pennsylvania State) and colleagues Steinn Sigurðsson and Matthew Povich is embarking on a hunt for Dyson spheres, which if observed in a distant galaxy colonized by a Kardashev Type III civilization, should throw an unmistakable signature in the infrared. Could we find such an object in our data from WISE, the Wide-field Infrared Survey Explorer satellite?

Or how about Kepler? Lucianne Walkowicz at Princeton was a winner of one of the 2013 grants, looking for hints of technology — of artificiality — around distant stars. The third recipient was exoplanet hunter Geoff Marcy (UC-Berkeley), working with Andrew Howard (University of Hawaii) and John Johnson (Caltech) on data from Kepler. When Clément Vidal writes about SETI as an observing rather than a communications program (in The Beginning and the End (Springer, 2014), he gives a powerful boost to the principles behind such searches.

Vidal’s book is rich and densely textured, which is why what I’ve tried to do in the last few days is to extract a few core ideas in the area most related to what we do here on Centauri Dreams. The early chapters are primarily concerned with building a worldview that is consistent with the latest thinking in cosmology, and Vidal speculates as well not only on multiverse theories but on a role for life in the cosmos that includes cosmogenesis, the creation of new universes. Olaf Stapledon immediately comes to mind because Vidal’s ambitious lunge into new intellectual terrain reminds me so much of the British writer. He would be at home with Vidal’s ideas of a cosmological artificial selection, one that draws on and extends ideas originally put forward by another deeply creative thinker, Lee Smolin.

Black Holes and their Uses

What can we, for example, say about black holes in a SETI context? For one thing, they form what would surely be the most powerful gravitational lensing opportunity available. Claudio Maccone has written about the potential of the central black hole in galaxies like the Milky Way becoming surrounded by a swarm of observing stations aligned with targets throughout the universe. For that matter, the lensing of electromagnetic radiation around a black hole is so intense that a communications channel could be set up for intergalactic distances (waiting out the answer is a different problem).

But black holes offer more than this. As the densest known objects in the universe, they can meet the needs of a Type III civilization faced with a continuing demand to support its energy consumption. Vidal runs through the literature on the matter, starting with Roger Penrose, who imagined extraction of black hole rotational energy by injection of matter, and through other scientists (the bibliography is extensive and quite good) who worked out the specifics of drawing energy from rotating black holes. Another possibility: Collecting energy from gravitational waves generated when black holes collide, or actually manipulating the merger of smaller black holes. In recent days, Louis Crane has studied small black holes as a power source — these objects convert matter into energy (Hawking radiation) at high levels of efficiency.

There are computational uses for black holes that push us out to the boundaries of computer science in the form of theorized ‘hypercomputers’ that draw on relativistic effects to dilate time in the proximity of black holes. Vidal’s philosophical ideas of cosmological artificial selection draw on the prospect that a Type III civilization may learn how to use black holes to create entirely new universes. However we view such prospects, the idea here is that for a wide variety of reasons, black holes should be attractors for intelligence. Vidal wants to know what the observable manifestations of any of these uses might be. Would such things be detectable?

But we don’t have to confine our search to black holes themselves. If extracting energy from the thin accretion disk around a rotating black hole may be one of the most efficient power sources we can imagine, we can also look for similar configurations around neutron stars or white dwarfs. A key question, then is this: Could a civilization harness its star’s energy with efficiencies that approach black hole densities? The interesting family of binary systems called X-ray binaries (because of their emissions in the X-ray electromagnetic spectrum) should, Vidal believes, intrigue us as one possible sign of an artificial astrophysical system. 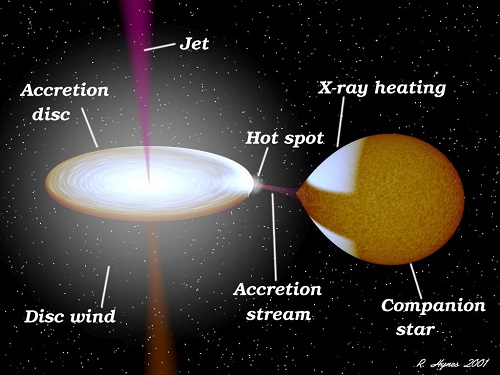 Image: An artist’s impression of GRS 1915, which is thought to be an X-ray binary. The black hole sucks material off the companion star, which is heated by friction, emitting X-rays. Credit: Rob Hynes, from http://www.phys.lsu.edu/~rih/.

There are others, including a whole range of contact binaries where stars exchange matter and energy in complicated ways. Vidal’s assumption is that these binaries are natural objects, but he doesn’t want to rule out the possibility that in at least some, we may be seeing something else at work.

Let me quote the author on this:

Accretion is a ubiquitous astrophysical process in galaxy and planet formation, so we may object that all binaries may simply always be natural. But let me introduce an analogy. Fission can be found in natural processes, as well as fusion, which is one of the core energetic processes in stellar evolution. Yet humans seek to copy them, and would certainly benefit greatly from — always — controlling them. So it is not because a process is known to occur naturally that its use in a given case is not under intelligent control. In fact, the situation may even be more subtle. The formation of XRBs might be natural, but they may later be controlled or taken over by ETIs, just as a river flowing down a mountain is a natural gravitational energy source that humans can harness with hydroelectric power stations.

In other words, there is a wide variety of binary stars in which we find accretion disks forming that could provide useful sources of energy to an advanced civilization. Vidal creates the term starivore to describe a civilization that could ‘feed’ on stars. More specifically:

It is an extraterrestrial civilization using stellar energy (Type KII) in the configuration of a slow non-conservative transient accreting binary…, with the dense primary… being either a planet, a white dwarf, a neutron star, or a black hole.

And indeed, Vidal quotes Stapledon’s novel Star Maker by way of showing that the idea of energy extraction from binary systems is not new. A speculative scenario that grows out of this is where our own civilization may one day go. As our technologies function on smaller and denser scales and we continue to move up the Kardashev ladder, thus using more and more energy, we run out of energy even if we cover the Earth with solar panels. So we bring Earth closer to the Sun (a Stapledon notion) to get more energy, with our descendants now living as postbiological beings. Still we need more energy, so stellar engineers create active accretion from, the Sun, transforming what had once been human life into a starivore civilization.

The density of the evolved Earth now approaches that of a white dwarf, and the new binary resembles what we see in our data as a cataclysmic variable, a binary system with white dwarf component. Vidal:

If such binary systems are starivores, then we should find that the primitive versions of them extract energy from a star paired with a planet that is not dense compared to WDs, NS, or BHs. This would happen at a low accretion rate, so planetary accretion is one of the concrete predictions from the starivore hypothesis (and indeed planet-star interactions have recently been discovered…) 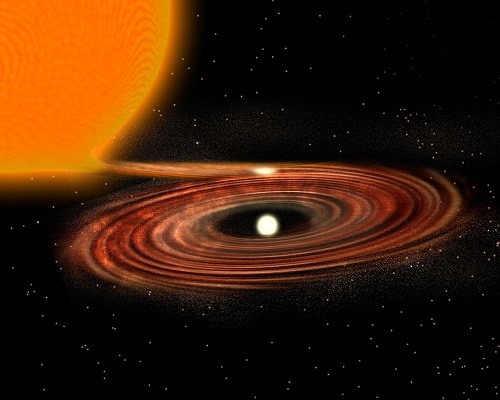 Image: An artist’s concept of the accretion disk around the binary star system WZ Sge. P. Marenfeld and NOAO/AURA/NSF.

Vidal’s hypothesis of starivores lets us see high energy astrophysics from an astrobiological point of view. Speculative? Of course, but Vidal is a philosopher for whom the play of ideas is as entrancing as the flow of notes in a Bach fugue. Rather than claiming the existence of starivore civilizations, he offers data on the wide variety of binary systems and the possibilities for energy extraction, with predictions about what we might see if such civilizations exist. A high energy astrobiology agenda is presented containing proposals for specific research. I do not have time this morning to go through the wealth of supporting argument but the book is well worth extended study.

Ultimately, the starivore idea is Vidal’s way of describing SETI’s new direction, a concrete example of how we can study objects in our data that may show the signature of extraterrestrial engineering. Building a robust scientific structure for such inquiries is at the heart of The Beginning and the End, whose principles are being played out and refined in the ongoing SETI searches mentioned at the beginning of this post. As with the original SETI work back to the days of Project Ozma, we can’t know what we’re going to find until we mount the actual search. Finding a Type II or III culture — or its remnants — would show us what intelligent life is capable of, while raising the familiar question of how long any technological species can hope to survive.