As the Thanksgiving holiday approaches here in the US, I’m looking at a new paper in the journal Anthropocene that calls the attention of those studying sustainability to the discipline of astrobiology. At work here is a long-term perspective on planetary life that takes into account what a robust technological society can do to affect it. Authors Woodruff Sullivan (University of Washington) and Adam Frank (University of Rochester) make the case that our era may not be the first time “…where the primary agent of causation is knowingly watching it all happen and pondering options for its own future.”

How so? The answer calls for a look at the Drake Equation, the well-known synthesis by Frank Drake of the factors that determine the number of intelligent civilizations in the galaxy. What exactly is the average lifetime of a technological civilization? 500 years? 50,000 years? Much depends upon the answer, for it helps us calculate the likelihood that other civilizations are out there, some of them perhaps making it through the challenges of adapting to technology and using it to spread into the cosmos. A high number would also imply that we too can make it through the tricky transition and hope for a future among the stars.

Sullivan and Frank believe that even if the chances of a technological society emerging are as few as one in 1000 trillion, there will still have been 1000 instances of such societies undergoing transitions like ours in “our local region of the cosmos.” The authors refer to extraterrestrial civilizations as Species with Energy-Intensive Technology (SWEIT) and discuss issues of sustainability that begin with planetary habitability and extend to mass extinctions and their relation to today’s Anthropocene epoch, as well as changes in atmospheric chemistry, comparing what we see today with previous eras of climate alteration, such as the so-called Great Oxidation Event, the dramatic increase in oxygen levels (by a factor of at least 104) that occurred some 2.4 billion years ago.

Out of this comes a suggested research program that models SWEIT evolution and the evolution of the planet on which it arises, using dynamical systems theory as a theoretical methodology. As with our own culture, these ‘trajectories’ (development paths) are tied to the interactions between the species and the planet on which it emerges. From the paper:

Each SWEIT’s history defines a trajectory in a multi-dimensional solution space with axes representing quantities such as energy consumption rates, population and planetary systems forcing from causes both “natural” and driven by the SWEIT itself. Using dynamical systems theory, these trajectories can be mathematically modeled in order to understand, on the astrobiology side, the histories and mean properties of the ensemble of SWEITs, as well as, on the sustainability science side, our own options today to achieve a viable and desirable future. 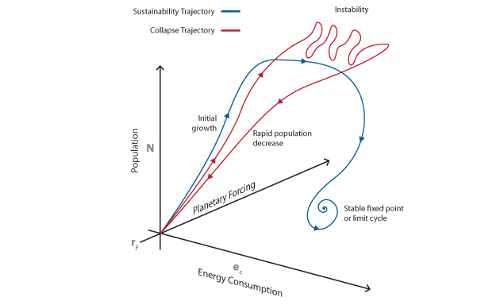 The authors point out that other methodologies could also be called into play, in particular network theory, which may help illuminate the many routes that can lead to system failures. Using these modeling techniques could allow us to explore whether the atmospheric changes our own civilization is seeing are an expected outcome for technological societies based on the likely energy sources being used in the early era of technological development. Rapid changes to Earth systems are, the authors note, not a new phenomenon, but as far as we know, this is the first time where the primary agent of causation is watching it happen.

Sustainability emerges as a subset of the larger frame of habitability. Finding the best pathways forward involves the perspectives of astrobiology and planetary evolution, both of which imply planetary survival but no necessary survival for a particular species. Although we know of no extraterrestrial life forms at this time, this does not stop us from proceeding, because any civilization using energy to work with technology is also generating entropy, a fact that creates feedback effects on the habitability of the home planet that can be modeled. 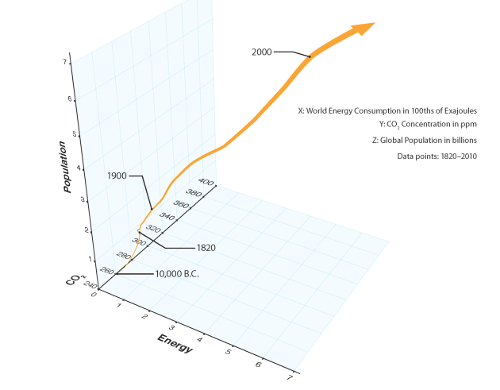 Image: Plot of human population, total energy consumption and atmospheric CO2 concentration from 10,000 BCE to today as trajectory in SWEIT solution space. Note the coupled increase in all 3 quantities over the last century. Credit: Michael Osadciw/University of Rochester.

Modeling evolutionary paths may help us understand which of these are most likely to point to long-term survival. In this view, our current transition is a phase forced by the evolutionary route we have taken, demanding that we learn how a biosphere adapts once a species with an energy-intensive technology like ours emerges. The authors argue that this perspective “…allows the opportunities and crises occurring along the trajectory of human culture to be seen more broadly as, perhaps, critical junctures facing any species whose activity reaches significant level of feedback on its host planet (whether Earth or another planet).”