Atmospheric Turmoil on the Early Earth

Yesterday’s post about planets in red dwarf systems examined the idea that the slow formation rate of these small stars would have a huge impact on planets that are today in their habitable zone. We can come up with mechanisms that might keep a tidally locked planet habitable, but what do we do about the severe effects of water loss and runaway greenhouse events? Keeping such factors in mind plays into how we choose targets — very carefully — for future space telescope missions that will look for exoplanets and study their atmospheres.

But the question of atmospheres on early worlds extends far beyond what happens on M-dwarf planets. At MIT, Hilke Schlichting has been working on what happened to our own Earth’s atmosphere, which was evidently obliterated at least twice since the planet’s formation four billion years ago. In an attempt to find out how such events could occur, Schlichting and colleagues at Caltech and Hebrew University have been modeling the effects of impactors that would have struck the Earth in the same era that the Moon was formed, concluding that it was the effect of small planetesimals rather than any giant impactor that would have destroyed the early atmosphere.

“For sure, we did have all these smaller impactors back then,” Schlichting says. “One small impact cannot get rid of most of the atmosphere, but collectively, they’re much more efficient than giant impacts, and could easily eject all the Earth’s atmosphere.” 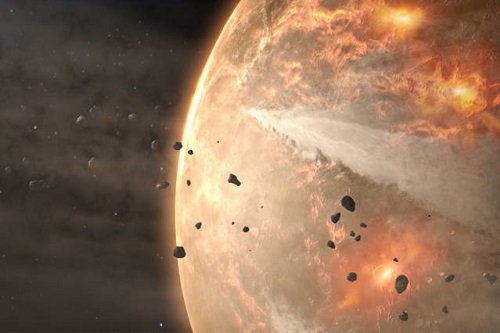 A single large impact could indeed have dispersed most of the atmosphere, but as the new paper in Icarus shows, impactors of 25 kilometers or less would have had the same effect with a great deal less mass. While a single such impactor would eject atmospheric gas on a line perpendicular to the impactor’s trajectory, its effect would be small. Completely ejecting the atmosphere would call for tens of thousands of small impacts, a description that fits the era 4.5 billion years ago. Calculating atmospheric loss over the range of impactor sizes, the team found that the most efficient impactors are small planetesimals of about 2 kilometers in radius.

Schlichting believes that giant impacts cannot explain the loss of atmosphere, for recent work uses the existence of noble gases like helium-3 inside today’s Earth to argue against the formation of a magma ocean, the consequence of any such giant impact. From the paper:

The same impactors that drove atmospheric loss would, in this scenario, introduce new volatiles as planetesimals melted after impact. By the researchers’ calculations, a significant part of the atmosphere may have been replenished by these tens of thousands of small impactors. What happens to a newly formed planet that can lead to the emergence of life? Learning about the primordial atmosphere shows us a planet at a stage when life was about to take hold, which is why Schlichting’s team wants to move forward with an analysis of the geophysical processes that, in conjunction with small impactors, so shaped Earth’s early environment.