Tightening the Focus on Near Earth Asteroids

The impact at Tunguska, Siberia on June 30,1908, evidently a small asteroid, devastated 1300 square kilometers, which works out to be the equivalent of a large metropolitan area. June 30, 2015 is thus an appropriate date to launch Asteroid Day, a global awareness campaign to put the issue of dangerous impacts in front of as many people as possible. An early December press conference at the London Science Museum, hosted by Lord Martin Rees, UK Royal Astronomer, announced the campaign and released a declaration of needed action:

The list of scientists, business leaders and artists behind the 100x Declaration, as it’s being called, is an impressive one that includes Jill Tarter, Kip Thorne, Stewart Brand, Richard Dawkins, Google’s Peter Norvig, astrophysicist and guitarist Brian May, Alexei Leonov, Jim Lovell and Rusty Schweickart, a group numerous and diverse enough that I’ll send you to the list of signatories available on the Asteroid Day website for more. Founding partners of the event include The Planetary Society, Astronomy Magazine, the Association of Space Explorers (ASE), and the California Academy of Sciences. ASE chairman Tom Jones explains:

“Finding hazardous asteroids early through an accelerated search program is the key to preventing future destructive impacts. The 100x Declaration will focus space policymakers on that important goal. ASE called last year for a stepped-up, global search effort; this can lead within a decade to an international deflection demonstration mission to show we know how to nudge an asteroid. Once we know what’s coming, we can design an effective space deflection campaign against dangerous objects we find.”

In November, NASA’s Near Earth Object Program released a map showing a visualization of data gathered between 1994 and 2013. Atmospheric impacts large enough to produce a fireball occurred on 556 occasions during this period, with almost all the small asteroids disintegrating before they reached the ground. The most prominent exception is the Chelyabinsk event in 2013, the largest asteroid to cause surface damage during this period. We learn that asteroids no larger than a meter in diameter hit the atmosphere and break apart about every other week. The Chelyabinsk event was caused by the explosion in the atmosphere of an asteroid thought to be about 20 meters in size. 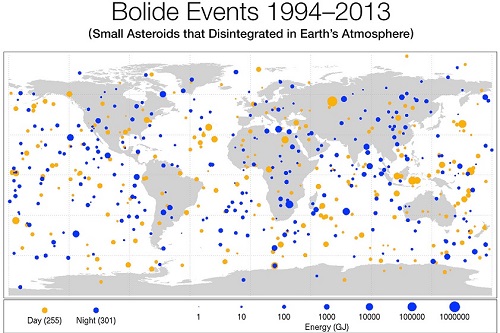 Image: This diagram maps the data gathered from 1994-2013 on small asteroids impacting Earth’s atmosphere to create very bright meteors, technically called “bolides” and commonly referred to as “fireballs”. Sizes of red dots (daytime impacts) and blue dots (nighttime impacts) are proportional to the optical radiated energy of impacts measured in billions of Joules (GJ) of energy, and show the location of impacts from objects about 1 meter (3 feet) to almost 20 meters (60 feet) in size. Credit: Planetary Science.

The good news is that the Earth’s atmosphere screens small asteroids from the surface quite effectively, but Lindley Johnson (NASA NEO Observations Program) says that data like these will help us figure out how often asteroids large enough to cause ground damage do get through. According to this JPL news release, the NEO Observations Program has identified 96 percent of the estimated population of one-kilometer or larger asteroids, with a goal of finding 90 percent of NEO’s larger than 140 meters in diameter. These are estimated to be as much as 25 times more numerous than the one kilometer asteroids. The NEO Observations Program finds and tracks asteroids whose orbits bring them within 50 million kilometers of Earth’s orbit.

And in a paper just released on the arXiv site, Clemens Rumpf (University of Southampton, UK) unveils ARMOR, the Asteroid Risk Mitigation Optimization and Research tool currently being developed at the university. The tool calculates the impact location and probability distribution on Earth’s surface (the so-called ‘risk corridor’), using (in this paper) a sample size of ten asteroids. Future iterations of ARMOR may prove useful in assessing the risk of individual asteroids.