What exactly is the shock wave that Voyager 1 encountered earlier this year, a wave that is still propagating outward, according to new data from the craft? Researchers at the Jet Propulsion Laboratory refer to it as a ‘tsunami wave,’ a simile that reminds us of the devastating effects of roiled water as it encounters land following an earthquake or an impact in the ocean.

But in this case the cause is a coronal mass ejection (CME), in which the Sun heaves out a magnetic cloud of plasma from its surface, generating a pressure wave. As this JPL news release explains, the outgoing wave runs into charged particles in deep space — interstellar plasma — creating the disturbance. In all, Voyager 1 has experienced three of these shock waves, with the most recent first being observed in February of 2014 and still continuing.

The new data were presented on December 15 at the American Geophysical Union meeting in San Francisco by Don Gurnett (University of Iowa), who is quoted as saying “Most people would have thought the interstellar medium would have been smooth and quiet. But these shock waves seem to be more common than we thought.” Project scientist Ed Stone (Caltech) said the shock wave was causing the ionized interstellar gas to “‘sing’ or vibrate like a bell.”

“The density of the plasma is higher the farther Voyager goes,” Stone added. “Is that because the interstellar medium is denser as Voyager moves away from the heliosphere, or is it from the shock wave itself? We don’t know yet.”

You can hear the ‘singing’ that Stone describes in this JPL video, which includes a color-coded graph showing the frequency of the waves — this indicates the density of the plasma. Detection of the wave came through the spacecraft’s plasma instrument. Previous instances of the phenomenon occurred from October to November of 2012 and April to May of 2013. In fact, it was the shock wave in 2013 that helped scientists determine that Voyager 1 had left the heliosphere, the ‘bubble’ created by the solar wind that extends well past the outer planets. The plasma the spacecraft encountered then was forty times denser than any previously measured. 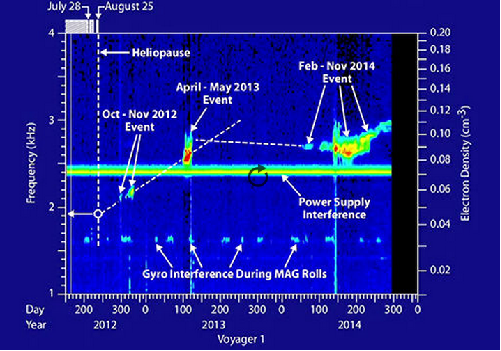 Image: The graphic above shows the frequency of the waves, an indication of the density of the plasma. Colors correspond to the intensity of the wave, with red being the loudest and blue the weakest. Credit: NASA/JPL.

Just how far out should these ‘tsunami waves’ be encountered? Gurnett, who is principal investigator for the plasma instrument on Voyager, thinks the waves may propagate out to twice the distance currently separating Voyager and the Sun. If that’s the case, we’ll be dealing with interesting plasma data as long as the Voyagers stay with us. Somewhere around 2025 is the likely endpoint of communications as the two probes run out of the power needed to transmit.

Ponder this: If it were not for loss of consumables, as seen in Voyager’s diminishing hydrazine and power levels, we could probably continue to track the craft for another century. As of this morning, Voyager 1 is 129.92 AU from the Sun, for a round-trip light time of over 36 hours.

Next post: A New Look at High Obliquity Exoplanets