An Internal Source for Earth’s Water?

The last time we caught up with Wendy Panero’s work, the Ohio State scientist was investigating, with grad student Cayman Unterborn, a possible way to widen the habitable zone. Slow radioactive decay in elements like potassium, uranium and thorium helps to heat planets from within and is perhaps a factor in plate tectonics. In 2012, Unterborn argued that planets with higher thorium content than the Sun would generate much more heat than the Earth, allowing a habitable zone with liquid water on the surface correspondingly farther out from the star.

You can read about that work and its implications in Widening the Habitable Zone. I was reminded of it because Panero reported at the recent American Geophysical Union meeting on her latest direction, a study involving the formation of the Earth’s water. Recall that analysis of data from the Rosetta probe implicated asteroids rather than comets as the main delivery mechanism for Earth’s oceans (see Rosetta: New Findings on Cometary Water). Panero’s new work indicates a substantial part of Earth’s water was made right here.

Hydrogen atoms trapped inside crystal defects and voids within minerals can bond with the oxygen already plentiful in these substances, which is how rock that appears dry can contain water. The potential for a great deal of water exists in mantle rock, given that the mantle makes up more than 80 percent of the total volume of the planet, according to this Ohio State news release. Working with doctoral student Jeff Pigott, Panero subjected mantle minerals to high pressures and temperatures to create conditions like those deep inside the Earth.

Changes to the crystal structures of these minerals as a result of compression helped the team gauge how much hydrogen the minerals can store. The minerals in play here include bridgmanite (a high pressure form of olivine), which is abundant in the lower mantle, and ringwoodite (another form of olivine). 525 to 800 kilometers below the surface, both minerals exist in a ‘transition zone’ that can hold large amounts of water, which could be carried to the surface by convection of mantle rock, the same process that produces plate tectonics. The researchers’ tests indicated that bridgmanite contained too little hydrogen to be significant for water delivery, but ringwoodite emerged as a candidate for deep-earth water storage. 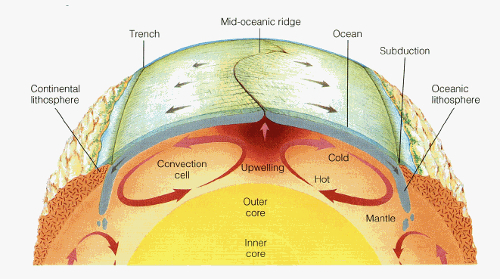 Panero and Piggott’s computer calculations helped to reveal the geochemical processes that would allow the minerals to rise through the mantle to the surface, the prerequisite for release of water into the oceans. Panero calls the relationship between surface water and plate tectonics “one of the great mysteries in the geosciences.” Her calculations with Pigott indicate that another mineral, garnet, may also play a role in delivering water from ringwoodite back down into the lower mantle, a circulation cycle enabled by plate tectonics that could maintain half as much water below the Earth as is currently flowing in today’s surface oceans.

A cycle like this would keep mantle water replenished even as it fed the oceans — the mantle would never exhaust its water supply. Says Panero:

Such a process also relaxes the need for accounting for all of Earth’s water through bombardment from asteroids or comets. The latter surely played a role, but perhaps supplemented water that has been reaching the surface through plate tectonics ever since.