Stars Passing Close to the Sun

Every time I mention stellar distances I’m forced to remind myself that the cosmos is anything but static. Barnard’s Star, for instance, is roughly six light years away, a red dwarf that was the target of the original Daedalus starship designers back in the 1970s. But that distance is changing. If we were a species with a longer lifetime, we could wait about eight thousand years, at which time Barnard’s Star would close to less than four light years. No star shows a larger proper motion relative to the Solar System than this one, which is approaching at about 140 kilometers per second.

The Alpha Centauri stars are the touchstone for close mission targets, but here again we could make our journey shorter with a little patience. In 28,000 years, having moved into the constellation Hydra, these stars will have closed to less than 3 light years from the Sun. Some time back, Erik Anderson discussed star motion in his highly readable Vistas of Many Worlds (Ashland Astronomy Studio, 2012), where I learned that the star Gliese 710, currently 64 light years out in the constellation Serpens, is headed squarely in our direction. Wait around for 1.3 million years or so and Gl 710 will push right through the Oort Cloud, with who knows what results in the inner system. A new paper considers these matters and tunes up the numbers on stellar encounters. 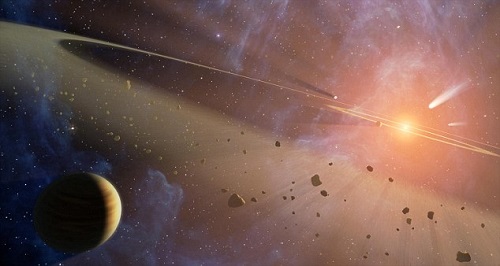 Image: Could a passing star dislodge comets from otherwise stable orbits so that they enter the inner system? Credit: NASA/JPL-Caltech).

A close pass from a star is bound to cause effects elsewhere in the Solar System, as Coryn Bailer-Jones (Max Planck Institute for Astronomy, Heidelberg) notes in his latest paper. Such an encounter can disrupt cometary orbits in the Oort, sending them into the inner system. Earth’s catalog of impact craters, which contains almost 200 known craters and doubtless should include many awaiting discovery, some of them beneath the oceans, is a reminder of what can happen. Nor should we forget that if we really drew the wild card, a close star turning supernova could have disastrous effects on surface life. So how many stars are problematic?

Bailer-Jones identifies the key candidates in this paper, assuming an Oort Cloud that extends to about 0.5 parsecs (1.6 light years), but he notes that a star passing even as close as several parsecs could produce significant cometary disruptions if the star were massive and slow enough. The author worked with 50,000 stars from the Hipparcos astrometric catalog in hopes of fine-tuning earlier studies of passing stars, but he notes that the search can’t be considered complete because radial velocities are not available for all stars and many are fainter than the Hipparcos work could detect. Further analysis will be needed using upcoming Gaia data.

But studying stars within a few tens of light years from the Solar System, Bailer-Jones finds forty that at some point were or will be within 6.4 light years of the Sun — the timeframe here extends from 20 million years in the past to 20 million years in the future. Fourteen stars, in fact, come within 3 light years of the Sun, with the closest encounter being with HIP 85605, which is currently about 16 light years away in the constellation of Hercules. The paper cites “…a 90% probability of [the star] coming between 0.04 and 0.20 pc” somewhere between 240,000 and 470,000 years from now, but Bailer Jones notes that this encounter has to be treated with caution because the astrometry may be incorrect. Future Gaia data should resolve this.

If HIP 85605 were to close to 0.04 parsecs of the Sun, it would be .13 light years out, or roughly 8200 AU, a close pass indeed. But one thing to keep in mind: Oort Cloud perturbation is not an unusual phenomenon, and the situation we are dealing with today is partially the result of encounters with stars that have occurred in the past. We have no data on the time between stellar encounters like these and the subsequent entry of comets into the inner system, making it all but impossible to link a specific passing star with a rise in the rate of Earth impacts. Bailer-Jones discusses all this on his website at the MPIA, where he notes the following:

Gl 710 is generally cited as the star making the closest encounter in previous studies, and Bailer-Jones sees a 90 percent probability that it passes within 0.10 to 0.44 parsecs, meaning an Oort Cloud passage in 1.3 million years. Looking into the past, the star gamma Microscopii, a G6 giant, encountered the Sun 3.8 million years ago, probably the most massive encounter within one parsec or less. Some encounters are recent: Tiny Van Maanen’s star, a white dwarf, passed near our Sun as recently as 15,000 years ago. While data from the Gaia mission will help us improve the parameters of this catalog of passing stars, Bailer-Jones believes the Gaia results will also make it possible to investigate the link between stellar encounters and impacts in a broad, statistical sense, helping us better understand the history of Earth impacts.

The paper is Bailer-Jones, “Close Encounters of the Stellar Kind,” accepted at Astronomy & Astrophysics (preprint).