A Stellar Correlation: Spin and Age

Figuring out how fast a star spins can be a tricky proposition. It’s fairly simple if you’re close by, of course — in our Solar System, we can observe sunspot patterns on our own star and watch as they make a full rotation, the spin becoming obvious. From such observations we learn that how fast the Sun spins depends on where you look. At the equator, the rotation period is 24.47 days, but this rotation rate decreases as you move toward the poles. Differential rotation means that some regions near the Sun’s poles can take as much as 38 days to make a rotation.

Because of these issues, astronomers have chosen an area about 26 degrees from the equator, where large numbers of sunspots tend to appear, as the point of reference, giving us a rotation of 25.38 days. You can imagine how complicated solar rotation gets once we look at other stars. We can’t resolve them to begin with, much less their ‘starspots,’ but what we can do is measure the decrease in light that starspots cause as they rotate around the star. You can see why studying a lightcurve like this resembles searching for transiting exoplanets, and in fact a mission like Kepler has to take the possibility of false positives from starspots into account.

Determining the Age of a Star

Stars between 80 and 140 percent of the Sun’s mass are the subject of new work on stellar spin by Søren Meibom (Harvard-Smithsonian Center for Astrophysics) and team. Using Kepler data, the researchers homed in on a 2.5 billion year old cluster called NGC 6819, part of a continuing investigation of stellar spin rates. Meibom’s work is part of the broader Kepler Cluster Study, for which he is the principal investigator. The work uses data from the original Kepler mission, the four years of data before the current K2 mission, to study star clusters.

The goal is to develop a precise method of obtaining the ages of stars like these, a method co-author Sydney Barnes (Leibniz Institute for Astrophysics) calls ‘gyrochronology.’ Stellar spin is the critical factor because stars slow down as they age, while other indicators, like size, temperature, and brightness, stay relatively constant. So far we’ve been able to use spin rate to determine stellar ages only with fast-spinning stars in young clusters. Starspot activity is prominent on young stars and thus easier to detect. We’re also helped by the fact that the pattern of color and brightness in a cluster can give us a good read on the overall cluster’s age. 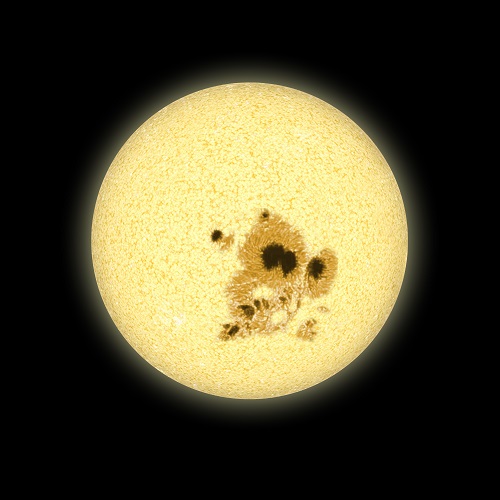 Image: It’s easier to tell the age of a young star because they rotate more quickly and have larger starspots. Credit: David A. Aguilar (CfA).

Thus we can correlate spin rate with age in specific instances. Get beyond about 600 million years in stellar age, though, and there is a huge gap between these young stars and stars as old as our 4.6 billion year old Sun. How fast do stars of intermediate ages spin? In this video on his work, Meibom refers to the ‘four billion year gap’ created.by our inability to measure spin for older stars. Young, rapidly spinning stars with large starspot regions, where brightness changes are pronounced, show a far more marked lightcurve than older stars, where starspot activity has dropped and teasing out the spin rate takes us to the limit of our instruments’ capabilities.

The Kepler telescope’s exquisitely sensitive measurements of stellar brightness are what has allowed us to fill in the gap. Studies of the cluster NGC 6811 produced the first measurements for the spin rate of one billion year old stars in 2011. Analyzing NGC 6819 data, Meibom and team have now been able to measure spin rates for 30 2.5 billion year old stars. We can thus plot spin against age on a far more meaningful graph, allowing us to extrapolate that when the Sun was 2.5 billion years old, its spin rate was roughly 18 days, with the rate dropping to eleven days when the Sun was 1 billion years old. A stellar ‘clock’ like this can help us determine which stars have planets that have had time for complex life to evolve. Looking forward, studying planets like our own around much older stars will give us clues to what lies ahead for the Earth.

“Now we can derive precise ages for large numbers of cool field stars in our Galaxy by measuring their spin periods,” says Meibom. “This is an important new tool for astronomers studying the evolution of stars and their companions, and one that can help identify planets old enough for complex life to have evolved.”

The paper is Meibom et al., “A spin-down clock for cool stars from observations of a 2.5-billion-year-old cluster,” published online in Nature 5 January 2015 (abstract). Links to the full text, and to video of the AAS press conference where these findings were announced, are available along with much more material on stellar age here. A CfA news release is also available.