What Comets Are Made Of

When the Rosetta spacecraft’s Philae lander bounced while landing on comet 67P/Churyumov-Gerasimenko last November, it was a reminder that comets have a hard outer shell, a black coating of organic molecules and dust that previous missions, like Deep Impact, have also observed. What we’d like to learn is what that crust is made of, and just as interesting, what is inside it. A study out of JPL is now suggesting possible answers.

Antti Lignell is lead author on a recent paper, which reports on the team’s use of a cryostat device called Himalaya that was used to flash freeze material much like that found in comets. The procedure was to flash freeze water vapor molecules at temperatures in the area of 30 Kelvin (minus 243 degrees Celsius). What results is something called ‘amorphous ice,’ as explained in this JPL news release. Proposed as a key ingredient not only of comets but of icy moons, amorphous ice preserves the mix of water with organics along with pockets of space.

JPL’s Murthy Gudipati, a co-author of the paper on this work, compares amorphous ice to cotton candy, while pointing out that on places with much more moderate temperatures, like the Earth, all ice is in crystalline form. But comets, as we know, can change drastically as they approach the Sun. To mimic this scenario, the researchers used their cryostat instrument to gradually warm the amorphous ice they had created to 150 Kelvin (minus 123 degrees Celsius).

What happened next involved the kind of organics called polycyclic aromatic hydrocarbons (PAHs) common in deep space. These had been infused in the ice mixture that Lignell and Gudipati created. Lignell describes the result:

“The PAHs stuck together and were expelled from the ice host as it crystallized. This may be the first observation of molecules clustering together due to a phase transition of ice, and this certainly has many important consequences for the chemistry and physics of ice.”

Expelling the PAHs meant that the water molecules could then form the tighter structures of crystalline ice. The lab had produced, in other words, a ‘comet’ nucleus of its own, similar to what we have observed so far in space. Gudipati likens the lab’s ‘comet’ to deep fried ice cream — an extremely cold interior marked by porous, amorphous ice with a crystalline crust on top that is laced with organics. What we could use next, he notes, is a mission to bring back cold samples from comets to compare to these results. 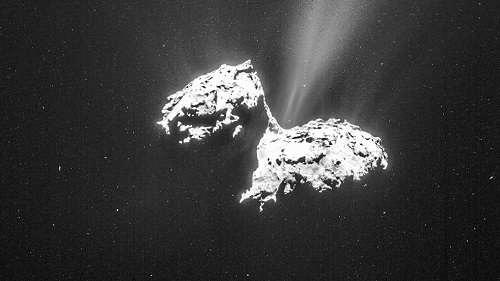 Image: Rosetta NAVCAM image of Comet 67P/C-G taken on 6 February from a distance of 124 km to the comet centre. In this orientation, the small comet lobe is to the left of the image and the large lobe is to the right. The image has been processed to bring out the details of the comet’s activity. The exposure time of the image is 6 seconds. Credits: ESA/Rosetta/NAVCAM – CC BY-SA IGO 3.0.

Meanwhile, we have the spectacular imagery above from Rosetta at comet 67P/Churyumov-Gerasimenko. What the European Space Agency refers to as ‘a nebulous glow of activity’ emanates from all over the sunlit surface, but note in particular the jets coming out of the neck region and extending toward the upper right. In this year of celestial marvels (Ceres, Pluto/Charon, and Rosetta at 67P/Churyumov-Gerasimenko), we’re seeing what happens to a comet as it warms and begins to vent gases from all over its surface. We’re now going to be able to follow Rosetta as it studies the comet from a range of distances, a view that until this year was solely in the domain of science fiction writers. What a spectacle lies ahead!

The paper is Lignell and Gudipati, “Mixing of the Immiscible: Hydrocarbons in Water-Ice near the Ice Crystallization Temperature,” published online by the Journal of Physical Chemistry on Oct0ber 10, 2014 (abstract).