Keeping information viable is something that has to be on the mind of a culture that continually changes its data formats. After all, preserving information is a fundamental part of what we do as a species — it’s what gives us our history. We’ve managed to preserve the accounts of battles and migrations and changes in culture through a wide range of media, from clay tablets to compact disks, but the last century has seen swift changes in everyday products like the things we use to encode music and video. How can we keep all this readable by future generations?

The question is challenging enough when we consider the short term, needing to read, for example, data tapes for our Pioneer spacecraft when we’ve all but lost the equipment needed to manage the task. But think, as we like to do in these pages, of the long-term future. You’ll recall Nick Nielsen’s recent essay Who Will Read the Encyclopedia Galactica, which looks at a future so remote that we have left the ‘stelliferous’ era itself, going beyond the time of stars collected into galaxies, which is itself, Nick points out, only a small sliver of the universe’s history. 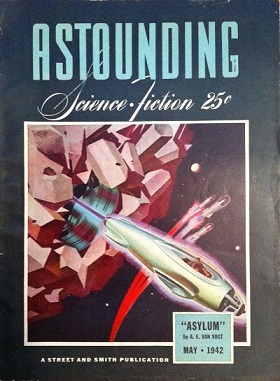 Image: The May, 1942 issue of Astounding Science Fiction, containing the first of the short stories that would eventually be incorporated into the Foundation novels.

Now we have an interesting new paper from Stefano Mancini and Roberto Pierini (University of Camerino, Italy) and Mark Wilde (Louisiana State University) that looks at the question of information viability. An Encyclopedia Galactica is going to need to survive in whatever medium it is published in, which means preserving the information against noise or disruption. The paper, published in the New Journal of Physics, argues that even if we find a technology that allows for the perfect encoding of information, there are limitations that grow out of the evolution of the universe itself that cause information to become degraded.

Remember, we’re talking long-term here, and while an Encyclopedia Galactica might serve a galactic population robustly for millions, perhaps billions of years, what happens as we study the fate of information from the beginning to the end of time? Mancini and team looked at the question with relation to what is called a Robertson-Walker spacetime, which as Mark Wilde explains in this video abstract of the work, is a solution of Einstein’s field equations of general relativity that describes a homogeneous, isotropic, expanding or contracting universe.

In addition to Wilde’s video, let me point you to The Cosmological Limits of Information Storage, a recent entry on the Long Now Foundation’s blog. As for the team’s method using the Robertson-Walker spacetime as the background for its development of communication theory models, it is explained this way in the paper:

… we can consider any quantum state of the matter field before the expansion of the universe begins and define, without ambiguity, its particle content. We then let the universe expand and check how the state looks once the expansion is over. The overall picture can be thought of as a noisy channel into which some quantum state is fed. Once we have defined the quantum channel emerging from the physical model, we will be looking at the usual communication task as information transmission over the channel. Since we are interested in the preservation of any kind of information, we shall consider the trade-off between the different resources of classical and quantum information.

In other words, encoded information is modeled against an expanding universe to see what happens to it. The result challenges the idea that there is any such thing as perfectly stored information, for the paper finds that over time, as the universe expands and evolves, a transformation inevitably occurs in the quantum space in which it is encoded. Noise is the result, what the authors refer to as an ‘amplitude damping channel.’ Information that is encoded into a storage medium is inevitably corrupted by changes to the quantum state of the medium.

Cosmology comes into play here because the paper argues that faster expansion of the cosmos creates more noise. We can encode our information in the form of bits or we can use information stored and encoded by the quantum state of particular particles, but in both cases noise continues to mount as the universe continues to expand. Collecting all the material for our Encyclopedia Galactica may, then, be a smaller challenge than preserving it in the face of cosmic evolution. On the time scales envisioned in Nick Nielsen’s essay (and studied at length in Fred Adams’ and Greg Laughlin’s book The Five Ages of the Universe: Inside the Physics of Eternity, the keepers of the encyclopedia have their work cut out for them.

Preserving the Encyclopedia Galactica will demand, it seems, continual fixes and long-term vigilance. But consider the researchers’ thoughts on the direction for future work:

…one could also cope with the degradation of the stored information by intervening from time to time and actively correcting the contents of the memory during the evolution of the universe. In this direction, channel capacities taking into account this possibility have been introduced… In another direction, and much more speculatively, one might attempt to find a meaningful notion for entanglement assisted communication in our physical scenario by considering Einstein-Rosen bridges… or entanglement between different universe’s eras, related to dark energy.

Now we’re getting speculative indeed! I’ve left out the references to papers on each of the possibilities within that quotation — see the paper, which is available on arXiv, for more. Mark Wilde notes in the video referenced above that another step forward would be to look at more general models of the universe in which information could be encoded in such exotic scenarios as the spacetime near a black hole. The latter is an interesting thought, and my guess is that we’ll have new work from these researchers delving into such models in the near future, a time close enough to our own that the data should still be viable.

The paper is Mancini et al., “Preserving Information from the beginning to the end of time in a Robertson-Walker spacetime,” New Journal of Physics 16 (2014), 123049 (abstract / full text).