Were There Planets Inside Mercury’s Orbit?

With the Mercury Messenger mission now coming to its end, it seems an appropriate time to speculate on why our inner Solar System looks the way it does. After all, as we continue finding new solar systems, we’re discovering many multi-planet systems with planets — often more than one — closer to their star than Mercury is to ours. We have Kepler to thank for these discoveries, its data analyzed in a number of recent papers including one arguing that about 5 percent of all Kepler stars have systems with tightly packed inner planets. The awkward acronym for such systems is STIP.

Well, maybe it’s not all that awkward, and Kathryn Volk and Brett Gladman (University of British Columbia) have good cause to deploy it in their new paper, which focuses on this topic. They’re wondering why our Solar System lacks planets inside Mercury’s orbit, and they point to the paper I mentioned above (Lissauer et al, 2014) as well as another by Francois Fressin and colleagues that concludes that half of all Kepler stars have at least one planet in the mass range from 0.8 to 2 Earth masses with orbits inside Mercury’s distance from our Sun, which is 0.39 AU, or 58.5 million kilometers. 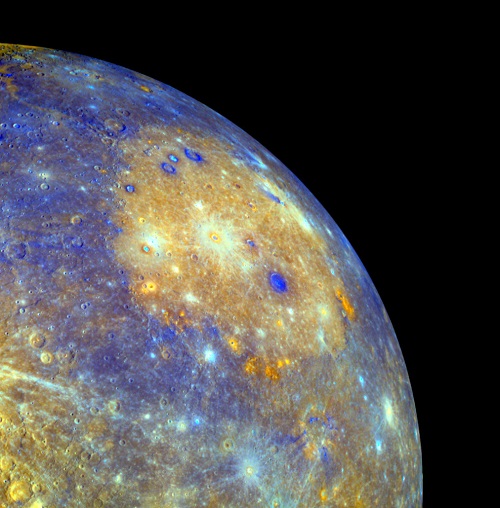 Image: The Caloris basin and adjacent regions on Mercury. Recent exoplanet discoveries raise the question of why our Solar System lacks planets inside Mercury’s orbit. Can instabilities in the early Solar System help us find the answer, while at the same time explaining some of the planet’s peculiarities? Image credit: JHU/APL.

Taking as an hypothesis that nearly all F, G and K-class stars originally form with planets well within Mercury’s orbital distance, Volk and Gladman ask whether the reason we find systems without such planets today is that instabilities have destroyed these worlds through generations of catastrophic collisions and gradual re-formation, leaving (in our case) Mercury as the surviving relic. It is true that STIPs can be dynamically stable over long time-frames (hence we see the Kepler examples), but the absence of tightly packed inner worlds around many stars is here taken as the result of a ‘metastable planetary arrangement’ that leaves one or no short period planets. The Kepler STIPs we see, then, are those that have survived this process.

The authors use the Kepler data to generate systems similar to those we have uncovered, allowing them to ‘evolve’ computationally to study system dynamics, taking some simulations well beyond the first collision to see how the instabilities multiply. An initial collision often produces second collisions at higher speeds. While low-speed impacts can occur in some systems, producing far smaller amounts of debris and subsequent accretion, a fraction of STIPs experience heavy perturbation that can lead to the destruction of their inner worlds. From the paper:

Our experiments show that instability timescales in these systems are distributed such that equal fractions of the systems go unstable (reach a first planetary collision) in each decade in time (Fig. 2). This logarithmic decay is not unknown in dynamical systems (eg., Holman & Wisdom (1993)) and is presumably related to chaotic diffusion and resonance sticking near the stability boundary. After a brief, relatively stable initial period, the systems hit instability at a rate of ∼20% per time decade, with half of the systems still intact at ∼100 Myr. The exact decay rate may be influenced by our usage of the current Kepler STIPs sample (perhaps the most stable); however if this decay rate held, at ∼5 Gyr 5–10% of STIPs would not yet have reached an instability, in rough agreement with the observed STIPs frequency.

Turning the results on our own Solar System, they find that the orbits of the three outer terrestrial planets (Venus, Earth, Mars) remain unaffected on 500 million year timescales by the presence of additional planets totaling several Earth masses, all of the latter inside a distance of 0.5 AU from the Sun. Dynamical instabilities would have initiated a sequence of collisions among these worlds that left Mercury as the sole survivor. The authors argue that it is possible for the orbits of the outer terrestrial planets to remain unperturbed as the inner planets fall victim to these events.

Various issues are explained by this scenario. A series of collisions concentrates iron into the surviving remnants, which accounts for Mercury’s high density. The authors also ask whether instabilities in the inner system approximately 4 billion years ago could account for the Late Heavy Bombardment (sometimes called the ‘lunar cataclysm’), when Mercury, Venus, Earth and Mars experienced a high number of impacts. From the paper:

Gladman & Coffey (2009) estimated that 10–20% of large (m to 100 km) debris originating near current Mercury would strike Venus, with 1–4% impacting Earth (∼0.1% strikes the Moon). The Earth’s impact rate would peak ∼1–10 Myr after the event and decay on ∼30 Myr timescales as Mercury and Venus absorb most of the debris; this is a plausible match for the cataclysm’s final stages (Cuk et al. 2010). A bottom-heavy size distribution for the 1–100 km debris could explain the recent finding (Minton et al. 2015) that a main-belt asteroid source would produce too many impact basins during the cataclysm.

Such an event might be studied by future sampling missions, for:

STIP debris would likely be mostly silicate-rich mantle material similar but not identical to main-belt asteroid compositions, consistent with cataclysm impactor compositions inferred via cosmochemical means (Joy et al. 2012). The smallest dust (being blown out hyperbolically) could impact the Earth-Moon system. We estimate that 10−11 of the departing dust would strike the Moon, at vimp ∼30 km/s. If any dust or meteoroid projectiles were retained, fragments might be found in regolith breccias compacted during the cataclysm epoch.

This is an interesting model, and the authors point out that it gets us out of the difficulty of assuming an inner protoplanetary disk edge that has to be adjusted to account for Mercury and the lack of worlds interior to its orbit. We have a model that would leave the orbits of the existing terrestrial-class worlds unaffected by the series of collisions and disintegrations that Mercury emerged from, although the recipients of catastrophic amounts of early debris. The model also accounts for the apparent instability of Mercury’s orbit on a 5 to 10 billion year time-frame.

The paper is Volk and Gladman, “Consolidating and Crushing Exoplanets: Did it happen here?,” submitted to Astrophysical Journal Letters (preprint). Thanks to Andrew Tribick for the pointer to this paper.