The Fermi Question: No Paradox At All

We’ve talked often enough about the so-called ‘Fermi paradox’ in these pages, but Gregory Benford recently passed along a new paper from Robert H. Gray making the case that there is in fact no paradox, and that Fermi’s intentions have been misunderstood. It’s an interesting point, because as it turns out, Fermi himself never published anything on the subject of interstellar travel or the consequences if it proved possible. The famous lunch conversation at Los Alamos in 1950 when he asked ‘Where is everybody’ (or perhaps ‘Where are they’) has often been seen as a venue for Fermi to express his doubts about the existence of any extraterrestrial civilization, and the ‘Fermi Paradox’ has become a common trope of interstellar studies. 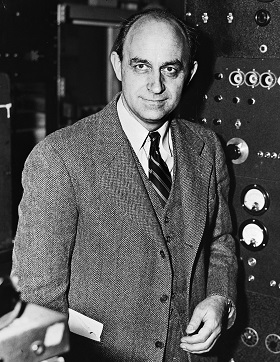 Robert Gray (Gray Consulting, Chicago) believes this is a misunderstanding, and sorts through the aftermath of that particular event. It would be another 27 years before the term ‘Fermi paradox’ even appeared in print, inserted into a JBIS paper by D. G. Stephenson. This followed upon Michael Hart’s 1975 discussion, which Gray sums up as ‘they are not here; therefore they do not exist,’ an argument Hart used to question the wisdom of pursuing SETI. Frank Tipler’s subsequent paper (1980) took us into the realm of artificial intelligence, claiming that self-replicating probes could use even current spacecraft speeds to colonize the galaxy in less than 300 million years. Tipler concluded that we were probably the only intelligent species in the universe since we had not encountered evidence for the existence of such probes.

Maybe we should leave Fermi’s name out of this, writes Gray:

Using Fermi’s name for the so-called Fermi paradox is clearly mistaken because (1) it misrepresents Fermi’s views, which were skeptical about interstellar travel but not about the possible existence of extraterrestrials, and (2) its central idea ‘‘they are not here; therefore they do not exist’’ was first published by Hart. Priority of publication and accuracy suggests using a name like Hart-Tipler argument instead of ‘Fermi paradox.’

Image: Enrico Fermi (1901-1954), whose famous question may have been misunderstood by subsequent writers.

I notice that as it currently stands, the Wikipedia entry for Fermi Paradox describes it as “…sometimes referred to as the Fermi–Hart paradox,” but Gray can turn to no less an eminence than Iosif Shklovsky, Russian astronomer and co-author, with Carl Sagan, of Intelligent Life in the Universe (Holden Day, 1966), who preferred the term ‘Hart Paradox,’ while Stephen Webb opined we might try ‘‘Tsiolkovsky-Fermi-
Viewing-Hart paradox’’ in his book Where Is Everybody (Copernicus, 2002). David Viewing had argued in 1975 that extraterrestrial civilizations might well exist despite the factors that Hart noted, meaning we should actively search for evidence of them.

Gray even falls back on Konstantin Tsiolkovsky, who wondered about questions like these in the 1930s. But is there any paradox here? Gray thinks not, for a paradox implies a statement that is self-contradictory, the nature of the contradiction suggesting that something is wrong:

The Hart-Tipler argument takes the seemingly obvious fact they are not here as evidence that a premise ‘‘technological extraterrestrials exist’’ must be false, because if they did exist, the colonization argument leads to the conclusion they are here, which seems absurd. This is a reductio ad absurdum argument, not a paradox, although like a paradox it depends on every statement being true—yet the argument consists of many speculations which are not known to be true.

Good point. Consider which statements we cannot know, starting with the assumption that interstellar flight is feasible, although most of us here believe that if we can envision it with our current level of technology, then it is at least a rational assumption. In fact, the original Project Daedalus was conceived in part as a way of showing that if we could, at levels of scientific development not far ahead of our own, design a starship, then surely other civilizations of much longer duration than ours would have found better ways to make these things happen.

As for the other implicit assumptions, the unknown nature seems clear enough. Would the galaxy indeed fill, as per Tipler, with self-reproducing probes in the kind of timeframes he imagined? Would this ‘colonization’ take a form we could understand or detect (Gray doesn’t get into this question, though it seems pertinent). Would any presence from another star system be likely to persist over millions or even billions of years? Clearly we have no answers here, and have no way of knowing whether we ever will. Assuming that each of these positions is therefore true and that Earth would be a visited world is thus a questionable stance.

According to three of those who were there (Emil Konopinski, Edward Teller, and Herbert York, all quoted in the Gray paper), Fermi’s point was not that extraterrestrial civilizations did not exist, but that interstellar travel that might bring them here was infeasible. As Gray sees it, the true ‘they are not here; therefore they do not exist’ argument should be credited to Michael Hart and Frank Tipler. The question may not be purely theoretical, for it turns out that this Hart-Tipler argument became one of the reasons given for canceling NASA’s SETI program in 1981, being cited by William Proxmire, who referenced Tipler’s work. Gray asks whether continued use of it in this way may perpetuate low funding levels in SETI. And this is worth quoting:

The literature on searches (Tarter, 1995) indicates that only a small fraction of the radio spectrum has been searched—0.3 GHz in surveys covering much of the sky (Leigh and Horowitz, 2000) using transit observations, and 2 GHz in targeted searches of 800 stars (Backus et al., 2004)—out of a terrestrial microwave window from 1 to 10 GHz, a free-space window up to 60 GHz (Oliver and Billingham, 1971), and much more electromagnetic spectrum beyond, including optical. Few searches would have detected low-duty-cycle signals anticipated by some (Benford et al., 2010; Gray, 2011), because both radio and optical surveys typically observe positions for only minutes. An incomplete search for signals cannot be used as evidence of complete absence of technological extraterrestrials.

The paper is Gray, “The Fermi Paradox Is Neither Fermi’s Nor a Paradox,” Astrobiology Volume 15, Number 3 (2015). Abstract available.