There is a wonderful moment in Larry Niven’s 1970 novel Ringworld when protagonist Louis Wu is first shown an image of an artificial ring completely encircling a star. These days the concept of a Dyson sphere is well established as a way for a civilization to capture as much energy as possible from the host star, but back then I had never heard of the concept. Dyson thought both a solid shell and a ring would be unstable and believed the best form for his concept was what he described as “…a loose collection or swarm of objects traveling on independent orbits around the star.” In that sense, Niven’s Ringworld wasn’t really Dysonian, but I found it staggering. 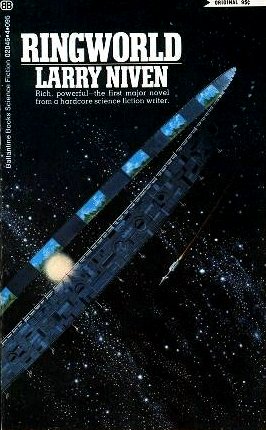 What a place! An engineered ring the diameter of Earth’s orbit fully 1.6 million kilometers wide, giving a habitable inner surface equal to about three million Earth-sized planets. A broader backdrop for science fiction adventure could scarcely be imagined unless it were a full-blown Dyson sphere. And indeed, Ringworld became the venue for a number of subsequent novels that tied into the collection of futuristic lore Niven called Known Space.

Speaking of science fiction authors reminds me that Dyson himself harked back to Olaf Stapledon, whose 1937 novel Star Maker seems to have given him his inspiration. In fact, Dyson has opined (I believe this was at the Starship Century symposium in San Diego) that ‘Stapledon sphere’ would be a more accurate name for the idea. Here’s Stapledon’s original read on Dyson spheres as a common outcome in a galaxy, viewed by the visionary protagonist as he witnesses events of the far future, when civilization “…began to avail itself of the energies of its stars upon a scale hitherto unimagined”:

“Not only was every solar system now surrounded by a gauze of light traps, which focused the escaping solar energy for intelligent use, so that the whole galaxy was dimmed, but many stars that were not suited to be suns were disintegrated, and rifled of their prodigious stores of sub-atomic energy.”

Addendum: Dyson’s talk in San Diego, which I had initially mis-reported as having been made in London, is available at the Starship Century site — click on the link to the videos.

Capturing all the power of a host star is a marker for a civilization that has reached Type II in Nikolai Kardashev’s classification of intelligent civilizations. Type III — this is what Stapledon depicts in the passage above — can tap the energy resources of its entire galaxy. Dyson Spheres would be vast indeed, but the various searches that have thus far been undertaken for them have relied on the amount of infrared radiation such an object would produce (see, among a number of articles in the archives here, Toward an Interstellar Archaeology, which talks about Richard Carrigan’s leading role in conceiving and mounting this search).

We have no Dyson sphere detections as of now, but speculative work on the concept continues, as revealed in a new paper from İbrahim Semiz and Salim Oğur (Boğaziçi University, Istanbul), forwarded to me recently by Adam Crowl. The duo posit a new take on Dyson spheres in which they are built around not G-class stars like our Sun but white dwarfs. Building around a white dwarf offers a number of possible solutions to Dyson sphere problems. And it turns out there are many of these.

Consider: If we somehow built a true sphere in the Solar System with a 1 AU radius, the gravity of the Sun would, according to the authors, be a miniscule 5 X 10-4 g. Inhabitants would be faced with microgravity. Rotating a Dyson Sphere would be one way out of the problem, but doing this would leave the equatorial regions as the truly usable surfaces, which would make it more sensible to build a ring-like structure in the first place rather than an all encompassing sphere that was largely useless. A system of independently rotating rings might be imagined but seems gratuitously complex.

The authors are aware of the instability that would plague both a Dyson sphere and a ring, but their paper isn’t about finding solutions to these problems but arguing for a different central object, which has advantages of its own. A white dwarf is much smaller than a G-class star, but applying Dysonian principles here would still give us a similar way of capturing energy while providing, by the authors’ estimate, 105 times the living area of a planet on the outside shell while not subjecting inhabitants to microgravity. A possible scenario is a civilization surviving the red giant stage of its star and returning to construct a Dyson Sphere around the white dwarf that eventually emerged.

…the red giant stage is also quite long, about a billion years for a solar-mass star (it decreases with mass), so it might seem that life/intelligence/civilization could also develop during that stage. However, conditions like radiative flux and stellar wind, even the mass of the star, are quite variable during the red giant phase, as opposed to the main-sequence period, when they are stable. Hence, while the astronomically-long-term outlook of an intelligent civilization is subject of conjecture, a civilization set to build a Dyson Sphere as discussed in this work would probably arise during the main sequence period of its star, and find ways to survive the red giant stage; maybe temporarily migrating to an orbit farther from its star, either to a planet, or failing/rejecting that, to orbital habitats a la O’Neill. In fact, such an effort would provide the experience needed before undertaking the construction of the Dyson Sphere around the eventual white dwarf.

We wind up with a 106 kilometer-scale Dyson Sphere with the inhabitants living on the outer shell as an alternative to the more common Dyson Sphere of fiction and speculation, one that would still be theoretically detectable through its infrared emissions but a much greater challenge because of its lower power. Its smaller size also means the white dwarf Dyson Sphere needs less construction material, with a 10-meter thick shell requiring approximately the mass of a single terrestrial planet. The required compressive strength of building materials for such a rigid sphere is also higher, demanding an extra means of support about which the authors choose not to speculate.

The paper is Semiz and Oğur, “Dyson Spheres around White Dwarfs,” available on the arXiv site as a preprint.