Now and again in relatively rarefied SETI discussions the topic of starship detection comes up. Specifically, if there were a starship moving through the interstellar medium in the general vicinity of our perch in the Orion Arm, would we be able to detect any sort of signature in our astronomical data? Centauri Dreams regular Al Jackson has looked into this for a variety of starship types (and discussed the matter at Starship Congress in 2013), and so has Gregory Benford, whose 2006 novelette “Bow Shock” describes the detection of an object whose synchrotron radiation fits the signature of the bow shock of a craft something like a Bussard ramjet.

We also have a 1995 paper from Robert Zubrin on the spectral signatures of starships and, back in 1977, a JBIS paper by D. R. J. Viewing and colleagues on relativistic spacecraft detection. Various detection methods come to mind, but Al Jackson has pointed out that the simplest would be finding the signature of waste heat (see SETI: Starship Radiation Signatures). A common theme in these discussions is to look for starships moving in the interstellar medium and try to identify interactions between that medium and the ship.

The choice makes sense, for we’ve looked on many occasions at what happens as we move swiftly between the stars. The designers of Project Daedalus knew that at 12 percent of the speed of light, some kind of shielding would be a good idea to protect the craft from interstellar dust particles and larger objects. And a new paper from Ulvi Yurtsever and Steven Wilkinson (Raytheon Company) gives us further information. Get your spacecraft moving fast enough and you’re dealing with collisions like those in particle accelerators but at much higher energies.

Into the Intergalactic Deep 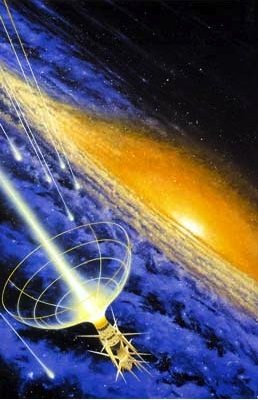 Relativistic effects can be described through the Lorentz factor, cited as γ (gamma) in the relevant equations. Gamma depends upon the speed at which an object is moving. We don’t see length contraction and time dilation in our everyday lives because we don’t move fast enough to notice them, but gamma increases exponentially as we approach the speed of light even though it is all but negligible at lower speeds. A spacecraft moving at 25 percent of lightspeed, for example, has a gamma of just 1.03, meaning time or length contraction of no more than 3 percent.

That gamma factor may be low, but even this speed is high enough to cause serious problems for a starship moving through interstellar dust, and as we go higher, the situation rapidly worsens. At a gamma factor of 2, our craft is moving at 86 percent of the speed of light. Now an object the size of a baseball with mass of 150 grams, note Yurtsever and Wilkinson, has an impact energy of 36 megatons. The authors define ‘extreme velocities’ as those with gamma greater than 9.1, which is well over 99 percent of the speed of light. Here we are in the range of the kind of proton/proton collisions used in particle accelerators to produce antiprotons.

The authors see no safe speeds in the interstellar medium greater than a gamma of 1.3, which is still more than 60 percent of the speed of light. Even the latter seems much too high: Shielding systems to protect a craft moving through the interstellar medium at 60 percent of c are well beyond anything I’ve ever seen discussed. But where the new paper really moves beyond earlier work is in its choice of destinations. What if an advanced civilization were to travel through not interstellar but intergalactic space? Here there is much less debris per unit volume and the chances of collision are sharply reduced. The interactions in question are with photons from the cosmic microwave background (CMB) as the craft moves close to c. From the paper:

The possibility of detecting radiation associated with distant relativistic spacecraft has been discussed in the literature before. These discussions mostly focus on detecting radiation from spacecraft engines or light from nearby stars reflecting off the spacecraft. Our approach is different in that we do not speculate on possible propulsion technologies but are interested in how a large relativistic object would interact with the interstellar/intergalactic medium and mainly with the CMB radiation. As a baryonic spacecraft travels at relativistic speeds it will interact with the CMB through scattering to cause a frequency shift that could be detectable on Earth with current technology.

Collisions with photons from the cosmic microwave background will appear in the spacecraft frame as highly energetic gamma rays. The paper assumes that a technology capable of reaching these speeds will be able to handle the effects of ionization and other interactions, but pair production is likely still an issue. Here we are looking at interactions between photons and matter in the hull of the spacecraft, with a single CMB photon creating an electron-positron pair when it collides with a nucleus in the hull, producing a characteristic signature. The paper looks at two special reference frames, the spacecraft frame and the rest frame of the cosmic microwave background, to understand how the CMB is distorted from these viewpoints.

The starship’s interactions with the CMB photons should produce a unique signature. The paper notes that the effect of CMB scattering from macroscopic relativistic objects like starships is similar to the Sunyaev-Zel’dovich effect in cosmology, in which low-energy CMB photons receive an energy boost when they collide with high energy electrons. The effects of this distortion of the cosmic microwave background have been used by cosmologists to study density perturbations in the universe and have been applied to the study of galactic clusters.

We don’t know if any civilization will learn how to travel at the kind of gamma factors discussed here, which take us well above 99 percent of the speed of light, but if a civilization is able to build spacecraft that can move this fast, they will have solved the problems of matter interactions that are much like those that occur in particle accelerators. The kind of technologies used would be well beyond our understanding but perhaps not beyond our detection. The paper concludes:

Our calculation for what an observer on earth could detect predicts a very unusual signature that is unlikely to be caused by any naturally occurring object in the known universe. This result is independent of propulsion technology, but the ability to detect the signal from Earth depends on available detector technologies. We are currently working to predict how far can we see this signature given our current capability.

The paper is Yurtsever and Wilkinson, “Limits and Signatures of Relativistic Spaceflight,” now available on the arXiv site.