‘Classical’ SETI, if I can use that term, is based on studying the electromagnetic spectrum primarily in the radio wavelengths thought most likely to be used for communication by an extraterrestrial civilization. SETI’s optical component is largely focused on searching for signals intended as communication. What is now being called Dysonian SETI is a different approach, one based on gathering observational evidence that may already be in our archives, data that demonstrate the existence of extraterrestrial activity far beyond our capability.

Just as a Dyson Sphere would reveal the workings of a civilization of Kardashev Type II — producing something like ten billion times the energy of a Type I culture — the detection of a starship would show us technology in action, even if the craft were, as Ulvi Yurtsever and Steven Wilkinson have speculated, a vehicle pushing up against light speed millions of light years away. As physicist Al Jackson has tackled starship detection in recent years, he has taken note of the work of D. R. J. Viewing and Robert Zubrin, which dealt with some but not all design and detection possibilities. Beamed propulsion, for example, does not turn up in these sources. 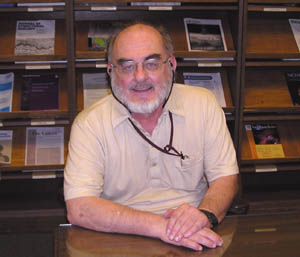 Jackson also points to a caveat in such work: If we are hoping to detect a starship using many of the methods described in previous studies, we need to be inside the engine’s exhaust cone or the transmitter cone of the energy beam. We also know that the cone will be narrow. Even so, there are a number of ways to proceed, ranging from the craft’s interactions with the interstellar medium to detection of its own waste heat.

Image: Physicist Al Jackson. I can’t remember who took this (it may even have been me).

Imagine a highly advanced ship built by a Kardashev Type II civilization. Give it a gamma factor of 500, which translates to 0.999998 times the speed of light. Assume the ship is as hot as 5000 K (near the melting temperature of graphene). All these are extreme assumptions (see below) but we’re pushing the envelope here. This is, after all, K2.

Would we be able to detect such a craft? Waste heat can be modeled as isotropic radiation, says Jackson, in the rest frame of the ship, while to an observer in another inertial frame, this radiation appears beamed. We get this result:

Considering a ship of modest size and mass, a K2 ship accelerating at one gravity. For instance, if we have a ship 1000 meters long and 50 meters in diameter, generating 11402 terawatts in its rest frame, Doppler boosting will generate approximately 1.2×108 terawatts beamed into the forward direction. However… unless the ship is headed straight at the observer, it will be hard to see. Take into account the Doppler shifting of the characteristic wavelength, from near green in the rest frame to soft x-ray in the observer’s frame. One might look for small anomalies in data from a host of new astrophysical satellite observatories.

Not very encouraging, but then, detecting the signature of a starship is not going to be easy. One possible place to look is in the realm of what Jackson calls ‘gravitational machines,’ such as the massive binaries Freeman Dyson once suggested could be used as gravitational slingshots. We might consider not just white dwarf and neutron star binaries but even black hole binaries. A gravitational assist in such scenarios might reach as high as .006c.

On the other hand, wouldn’t a civilization that could already reach binaries like these have acquired capabilities greater than those it would gain by using the binaries in the first place? Perhaps better to consider black holes as a source of direction change for fast-moving starships. Jackson points out that a starship orbiting a black hole will have visible waste radiation. In fact, a close-orbiting ship will have fluctuating emissions peaked at those times that the ship, black hole and observer line up, a phenomenon that is the result of gravitational focusing. 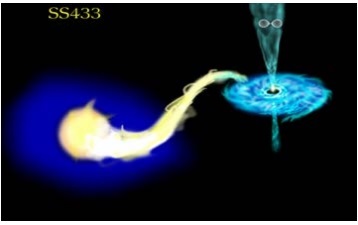 Other extreme astronomical objects may be worthy of investigation in these terms. Jackson points to SS 433, a neutron star or black hole orbited by a companion star, with material being drawn from the companion into an accretion disk. Jets of particles are being blown outward from the poles. While at SS 433 the particles in the jets are moving at 26 percent of the speed of light, jet material in configurations like these can reach 95 percent of lightspeed. Using such jets to propel magsails that reach .5 times the speed of light would allow a K2 civilization an abundant source of energy for repeated missions at a high percentage of c.

We don’t know what a K2 civilization will choose to do, but exploiting naturally occurring resources like these may be an attractive proposition. There may be interesting prospects not just for magsails but so-called ‘lightsails’ around extreme astronomical objects:

Consider a K2 civilization taking advantage of a Schwarzschild or Kerr black hole as a means of focusing radiation from a beaming station onto a sail. The advantage of this is the tremendous amount of amplification possible. One of the most promising modes of interstellar flight propulsion is the use of a sail, a transmitter, and maybe a ‘lens’ to focus a beam of laser light or microwaves. Extrapolate to a K2 civilization the use of a black hole as the focusing device. An approximate calculation for a Schwarzschild black hole shows that beamed radiation can be amplified by a factor 105 to 1015.

So-called ‘strong focusing’ is tricky to model and, as Jackson explains in some detail, the astronomical configuration — the location of a source and the best location for the sail — are topics that need much more work. But the idea that a K2 civilization would use the immense energies available in the area of black holes makes them a natural hunting ground for Dysonian SETI activity. Could a black hole in the vicinity of a starship’s destination be used for braking?

Robert Bussard’s 1960 paper on interstellar ramjets posited a spacecraft that could collect gas from the interstellar medium, compressing it to a plasma that could be brought to fusion temperatures. Carl Sagan would later suggest that a magnetic scoop would be the ideal way for this gas collection to proceed, but later work by Dana Andrews and Robert Zubrin revealed how much drag such a magnetic scoop would produce. The ‘magsail’ actually acts like a brake.

Why not, then, use these magsail properties, shedding energy and momentum as a spacecraft nears its destination? Craft moving at relativistic velocities might find this an efficient way to arrive, one that produces a ‘bow shock’ whose radiation ranges from the optical to the X-ray bands. “A starship will be much smaller than a neutron star,” writes Jackson, “but detection of the radiation signature of a starship’s bow shock could imply a very peculiar object.” 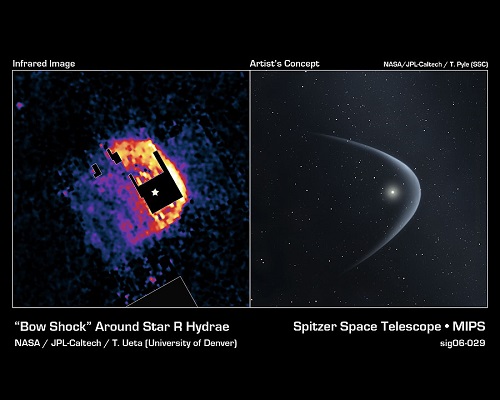 Image: Two examples of neutron star bow shock, the one on the right an artist’s concept. Credit: Wikimedia Commons.

Jackson’s paper is a work in progress, with an early version printed in Horizons, the AIAA bulletin for the organization’s Houston chapter. A journal submission is in the works as he refines the draft. It’s a fascinating discussion that reminds us how much we have to speculate about when we talk K2 civilizations. Jackson notes the major assumptions: Ships can run ‘hot,’ and that means as high as 5000 K; material structural strength limits have been overcome; extreme accelerations are allowable and dust/gas shielding issues resolved. We can argue about the limits here, but it’s clear that a K2 civilization will have capabilities far beyond our science, and it may be the random anomaly in astronomical data that flags its existence.