With SETI on my mind after last week’s series on Dysonian methods, it seems a good time to discuss Fast Radio Bursts, which have become prominent this week following the appearance of a new paper. A New Scientist piece titled Is this ET? Mystery of strange radio bursts from space is also circulating, pointing out that these powerful bursts of radio waves lasting for milliseconds, each covering a broad range of radio frequencies, are still unexplained, and that they seem to follow a mathematical pattern. 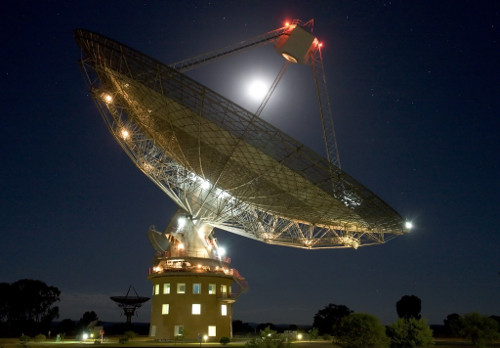 Eleven bursts have been detected so far, dating back to 2001. The paper, by Michael Hippke (Institute for Data Analysis, Neukirchen-Vluyn, Germany), Wilfried Domainko (Max-Planck-Institut fur Kernphysik, Heidelberg) and John Learned (University of Hawaii, Manoa), points out that the pulses have dispersion measures higher than we would expect from sources inside the galaxy. But for reasons the paper goes on to explain, they’re probably not of extragalactic origin.

To untangle all this, let’s pause on the term ‘dispersion measure.’ It comes from the study of radio pulsars, where it has been observed that a pulse can be delayed depending upon its radio frequency as it sweeps through charged particles.

To clarify this, let me quote from a useful online discussion on pulsar research that Ryan Lynch (now at McGill University) published on the matter. Lynch points out that the dispersion measure (DM), which is a characteristic of a pulsar signature, doesn’t have anything to do with the pulsar itself. It is, instead, a marker that tells us something about the space between Earth and the pulsar, or as in the case above, a Fast Radio Burst. That space may contain various charged particles, but the delay they produce is inversely proportional to the mass of the particles — in other words, the amount of dispersion is dominated by electrons. According to Lynch:

Michael Hippke and team want to consider what the dispersion measures of the detected Fast Radio Bursts tell us about their nature, hence the title of the paper, “Discrete Steps in Dispersion Measures of Fast Radio Bursts.” It’s an interesting astronomical question because it could be that FRBs could be used as ‘standard candles’ that could help us understand more about dark energy. The researchers wanted to know whether a clustering in the dispersion measure values could show which came from within our galaxy and which from without.

What turns up is what the authors describe as a ‘potential discrete spacing in DM of the FRBs.’ The bursts’ dispersion measures are integer multiples of the number 187.5, which the paper argues makes an extragalactic origin unlikely. The thinking here is that intergalactic dust would randomize the DM values, and thus we are more likely dealing with a source within the Milky Way. Just what the source could be makes for interesting speculation. From the paper:

A more likely option could be a galactic source producing quantized chirped signals, but this seems most surprising. If both of these options could be excluded, only an artificial source (human or non-human) must be considered, particularly since most bursts have been observed in only one location (Parkes radio telescope). A re-assessment of man-made phenomena, such as perytons (Burke-Spolaor et al. 2011), would then be required. Failing some observational bias, the suggestive correlation with terrestrial time standards seems to nearly clinch the case for human association of these peculiar phenomena.

That latter point has to do with the fact that FRBs seem to arrive at close to the full integer second, suggesting a man-made signal. As to the Burke-Spolaor paper cited above, it examines a series of pulses likewise detected at the Parkes instrument that are, as the abstract says, of ‘clearly terrestrial origin,’ and hence an example of our need to tune up radio-pulse survey techniques to rule out terrestrial signals. I also note the citation’s last sentence, which makes the case for a human origin. But as the Hippke paper points out, ‘In the end we only claim interesting features which further data will verify or refute.’

FRBs merit our attention because while we may have a human origin for these bursts, it’s conceivable that an extraterrestrial beacon could be in play. New Scientist quotes Jill Tarter, former director of the SETI Institute, as saying “I’m intrigued. Stay tuned.” Which we’ll all do, though mindful of the fact that with such a small number of bursts, we are working with little data. A hitherto undiscovered astronomical phenomenon would be a useful discovery, but we need to see how the pattern holds up as more FRBs are detected.

Back in 1967, The Byrds produced a song called “CTA-102,” a musical reflection of the discussion of the quasar by the same name, whose emissions had excited worldwide interest. Nikolai Kardashev himself wondered in 1963 whether a Type II or Type III civilization could be behind the then unidentified source, and subsequent observations by Gennady Sholomitskii kept the idea in the public imagination. We found a natural explanation for CTA-102, but as with FRBs, checking our data against the possibility of extraterrestrial communication makes good sense and could in the process reveal a new type of astronomical object or, more likely, a nearby human explanation.