In Search of Colliding Stars

How often do two stars collide? When you think about the odds here, the likelihood of stellar collisions seems remote. You can visualize the distance between the stars in our galaxy using a method that Rich Terrile came up with at the Jet Propulsion Laboratory. The average box of salt that you might buy at the grocery store holds on the order of five million grains of salt. Two hundred boxes of salt, then, make a billion grains, while 20,000 boxes give us 100 billion. That’s now considered a low estimate of the number of stars in our galaxy, which these days tends to be cited at about 200 billion, but let’s go with the low figure because it’s still mind-boggling.

So figure you have 20,000 boxes of salt and you spread the grains out to mimic the actual separation of stars in the part of the galaxy we live in. Each grain of salt would have to be eleven kilometers away from any of its neighbors. These are considerable distances, to say the least, but of course there are places in the galaxy where stars are far closer to each other than here.

I was reminded of this recently while reading Jack McDevitt’s novel Seeker (Ace, 2005), which Centauri Dreams reader Rob Flores had mentioned in our discussion of Scholz’s Star and its close pass by the Solar System some 70,000 years ago (see Scholz’s Star: A Close Flyby). Seeker is one of Jack’s tales about Alex Benedict, a far future dealer in antiquities, some of which are thousands of years in our own future. Here’s a bit of dialogue that brings up stellar collisions. On the distant world of the McDevitt universe, Benedict’s aide Chase Kolpath is discussing the matter with an astrophysicist and asks how frequent such collisions are:

“They happen all the time, Chase. We don’t see much of it around here because we’re pretty spread out. Thank God. Stars never get close to one another. But go out into some of the clusters—” She stopped and thought about it. “If you draw a sphere around the sun, with a radius of one parsec, you know how many other stars will fall within that space?”

“Zero,” I said. “Nothing’s close.” In fact the nearest star was Formega Ti, six light-years out.

“Right. But you go out to one of the clusters, like maybe the Colizoid, and you’d find a half million stars crowded into that same sphere.”

“I never kid, Chase. They bump into one another all the time.” I tried to imagine it. Wondered what the night sky would look like in such a place. Probably never got dark.

I’ve always had the same thought, and tried to imagine myself in a globular cluster like 47 Tucanae or the ancient Messier 5. Another place that (almost) never got dark was the planet in Isaac Asimov’s story “Nightfall” (Astounding Science Fiction, September 1941). Asimov took us to a world where six stars kept the sky continually illuminated except for a brief night every 2049 years. The story, so Asimov’s autobiography tells us, grew out of John Campbell’s asking Asimov to write something based on a famous quotation from Ralph Waldo Emerson:

If the stars should appear one night in a thousand years, how would men believe and adore, and preserve for many generations the remembrance of the city of God!

Of course, the Asimov tale involves a six-star system in which the inhabitants know nothing beyond the stars that keep them illuminated. In a galactic cluster, things get incredibly tight, with typical star distances in the range of one light year, but distances in the core much closer to the size of the Solar System. Planetary orbits in such tight regions would surely be unstable, but we can still try to imagine a sky spangled with stars this close in all directions, if only as an exercise for the imagination. Keep in mind, too, that clusters like Omega Centauri can have several million solar masses worth of stars. An environment like this one is surely ripe for stellar collisions. 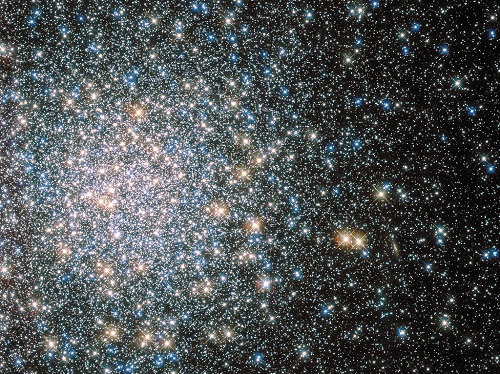 Image: This sparkling jumble is Messier 5 — a globular cluster consisting of hundreds of thousands of stars bound together by their collective gravity. But Messier 5 is no normal globular cluster. At 13 billion years old it is incredibly old, dating back to close to the beginning of the Universe, which is some 13.8 billion years of age. It is also one of the biggest clusters known, and at only 24 500 light-years away, it is no wonder that Messier 5 is a popular site for astronomers to train their telescopes on. Messier 5 also presents a puzzle. Stars in globular clusters grow old and wise together. So Messier 5 should, by now, consist of old, low-mass red giants and other ancient stars. But it is actually teeming with young blue stars known as blue stragglers. These incongruous stars spring to life when stars collide, or rip material from one another. Credit: Cosmic fairy lights by ESA/Hubble & NASA. Via Wikimedia Commons.

17th Century Detection of a Collision?

Now we have word that astronomers have found evidence that the nova known as Nova Vulpeculae 1670 was actually the result of a stellar collision. Appearing in 1670 and recorded by both Giovanni Domenico Cassini and Johannes Hevelius, great figures in the astronomy of their day, the ‘new star’ was a naked eye object that varied in brightness over the course of two years. It vanished, reappeared, vanished, reappeared and finally disappeared for good.

We’ve known since the 1980s that a faint nebula in the suspected location of the event was probably all that was left of the star, but new work using APEX (Atacama Pathfinder Experiment telescope), the Submillimeter Array (SMA) and the Effelsberg radio telescope has allowed us to study the chemical composition of the nebula and measure the ratios of different isotopes in the gas. We learn that these ratios do not correspond to what we would expect from a nova.

So what was Nova Vul 1670? The mass of material was too great to be the product of a nova explosion. The paper on this work argues that we are looking at what is left after a collision between two stars, which leaves us with what is known as a red transient, in which material from the stellar interiors is blown into space, leaving only a cool, dusty remnant.

Only a few such objects, also known as luminous red novae, have been detected, with the first confirmed instance being the object M85 OT2006-1 in Messier 85. We also have the case of V1309 Scorpii, which appears to be an interesting instance of the merger of a contact binary, detected in 2008. With so few examples to work with, we have much to learn about the frequency and nature of these phenomena. But globular clusters do appear to be the best place to look for collisions. Back in 2000, Michael Shara (American Museum of Natural History) told a symposium that several hundred collisions per hour could be expected throughout the visible universe, almost all of which we will never detect. (see Two Stars Collide; A New Star Is Born).

Shara estimated as well that in the ten billion year lifetime of the Milky Way, about one million collisions have occurred within globular clusters, or about one every 10,000 years. So Jack McDevitt’s astrophysicist seems to have it about right. If the entire universe is your stage, then stars collide all the time. When Hevelius described Nova Vul 1670 as ‘nova sub capite Cygni’ — a new star below the head of the Swan — he could have no idea how rare his observation was in terms of a human lifetime, but how common on a cosmic time scale.

The paper on Nova Vul 1670 is Kamiński et al., “Nuclear ashes and outflow in the oldest known eruptive star Nova Vul 1670,” published online in Nature 23 March 2015. The link to the abstract is broken as of this morning, but I’ll post it when it’s functional.