I’ve used the term ‘interstellar archaeology’ enough for readers to know that I’m talking about new forms of SETI that look for technological civilizations through their artifacts, as perhaps discoverable in astronomical data. But there is another kind of star-based archaeology that is specifically invoked by the scientists behind GALAH, as becomes visible when you unpack the acronym — Galactic Archaeology with HERMES. A new $13 million instrument on the Anglo-Australian Telescope at Siding Spring Observatory, HERMES is a high resolution spectrograph that is about to be put to work. 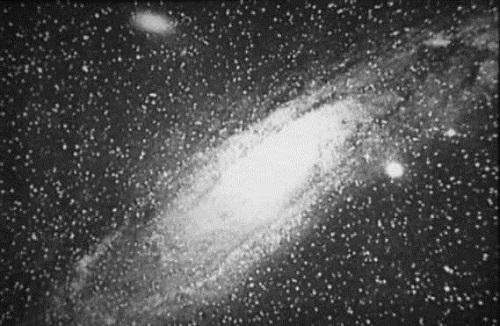 Image: I can’t resist running this beautiful 1899 photograph of M31, then known as the Great Andromeda Nebula, when talking about our evolving conception of how galaxies form. Credit: Isaac Roberts (d. 1904), A Selection of Photographs of Stars, Star-clusters and Nebulae, Volume II, The Universal Press, London, 1899. Via Wikimedia Commons.

And what an instrument HERMES is, capable of providing spectra in four passbands for 392 stars simultaneously over a two degree field of view. What the project’s leaders intend is to survey one million stars by way of exploring how the Milky Way formed and evolved. The idea is to uncover stellar histories through the study of their chemistry, as Joss Bland-Hawthorn (University of Sydney) explains:

“Stars formed very early in our galaxy only have a small amount of heavy elements such as iron, titanium and nickel. Stars formed more recently have a greater proportion because they have recycled elements from other stars. We reach back to capture this chemical state – by analysing the mixture of gases from which the star formed. You could think of it as its chemical fingerprint – or a type of stellar DNA from which we can unravel the construction of the Milky Way and other galaxies.”

Determining the histories of these stars with reference to 29 chemical signatures as well as stellar temperatures, mass and velocity should help the researchers create a map of their movements over time. This should be a fascinating process, for views of galaxy formation have changed fundamentally since the days when Allan Sandage and colleagues proposed (in 1962) that a protogalactic gas cloud that settled into a disk could explain galaxies like the Milky Way.

That concept suggested that the oldest stars in the galaxy were formed from gas that was being drawn toward the galactic center, collapsing from the halo to the plane, and in Sandage’s view, this collapse was relatively rapid (on the order of 100 million years), with the initial contraction beginning roughly ten billion years ago. Later we begin to see a different model developing, one in which the galaxy formed through the agglomeration of smaller elements like satellite galaxies. Both these processes are now believed to play a role, with infalling satellite systems affecting not just the galactic halo but also the disk and bulge. 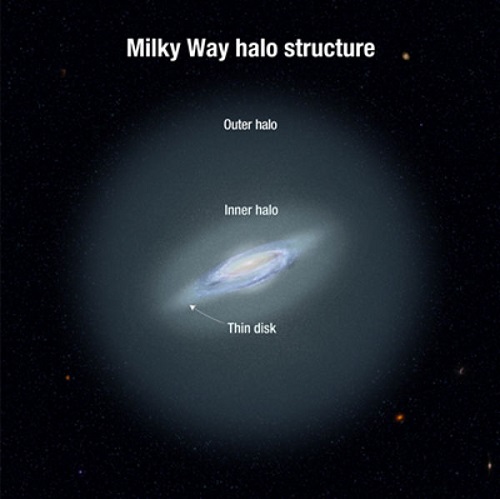 Image: Structure of the Milky Way, showing the inner and outer halo. Credit: NASA, ESA, and A. Feild (STScI).

Galactic archaeology is all about detecting the debris of these components, making it possible to reconstruct a plausible view of the proto-galaxy. How the galactic disk and bulge were built up is the focus, determined by using what the researchers call ‘the stellar relics of ancient in situ star formation and accretion events…’ The authors explain the challenges they face:

… unraveling the history of disc formation is likely to be challenging as much of the dynamical information such as the integrals of motion is lost due to heating. We need to examine the detailed chemical abundance patterns in the disc components to reconstruct [the] substructure of the protogalactic disc. Pioneering studies on the chemodynamical evolution of the Galactic disc by Edvardsson et al. (1993) followed by many other such works (e.g. Reddy et al. 2003; Bensby, Feltzing & Oey 2014), show how trends in various chemical elements can be used to resolve disc structure and obtain information on the formation and evolution of the Galactic disc, e.g. the abundances of thick disc stars relative to the thin disc. The effort to detect relics of ancient star formation and the progenitors of accretion events will require gathering kinematic and chemical composition information for vast numbers of Galactic field stars.

Two days ago we looked briefly at globular clusters and speculated on what the view from a planetary surface deep inside one of these clusters might look like. The globular clusters, part of the galaxy’s halo, contain some of its oldest stars, and the entire halo is poor in metals. Going into the GALAH survey, the researchers believe that a large fraction of the halo stars are remnants of early satellite galaxies that evolved independently before being acquired by the Milky Way, a process that seems to be continuing as we discover more dwarf satellites and so-called ‘stellar streams,’ associations of stars that have been disrupted by tidal forces.

Seventy astronomers from seventeen institutions in eight countries are involved in GALAH, which is led by Bland-Hawthorn, Gayandhi De Silva (University of Sydney) and Ken Freeman (Australian National University). Their work should give us much new information not just about the halo and globular clusters but the interactions of stars throughout the disk and central bulge. The paper on the project is De Silva et al., “The GALAH survey: scientific motivation,” Monthly Notices of the Royal Astronomical Society Vol. 449, Issue 3 (2015), pp. 2604-2617 (abstract). A University of Sydney news release is also available.

And in case you’re interested, the classic paper by Sandage et al. is “Evidence from the motions of old stars that the Galaxy collapsed,” Astrophysical Journal, Vol. 136 (1962), p. 748 (abstract).