Radio bursts scant milliseconds long that have been reported at the Parkes radio telescope in New South Wales — so-called ‘perytons’ — turn out to be the product of microwave ovens. The Case of the Puzzling Perytons, as Earl Stanley Gardner might have titled it, appeared in these pages earlier, with alliteration intact, when Jim Benford tackled it in Puzzling Out the Perytons. You’ll recall that Benford thought microwave ovens were involved, and now we learn that the Parkes team had independently reached the same conclusion before he arrived. Moreover, the authors of the Parkes paper had already embarked upon an investigation that now yields positive results.

Make no mistake, this is a useful finding, even if it has generated a certain degree of understandable banter. After all, we’re looking for emissions from deep space but fending off spurious signals generated by staff lunching on the grounds of the observatory itself. The larger picture, though, is that the kind of signals our radio telescopes work with are so infinitesimally small that they’re subject to myriad incursions from the sea of radiating objects all around us.

We need to know what these sources of interference are, and although it doesn’t have the same cachet as discovering a new astrophysical phenomenon, much less detecting the signature of an extraterrestrial civilization, something as mundane as tracing interference to a microwave oven is a step forward. Perytons have been reported back into the 1990s, in some ways acting like a signal from deep space, but in others (their persistent appearance in different fields of view), looking like the result of nearby interference from, perhaps, an aircraft or telescope component.

In fact, that characteristic wide-field detectability is a known screen that radio astronomers use to filter out local interference. Also looking suspiciously human was the fact that the 25 perytons reported in the literature occurred only during office hours and primarily on weekdays. The perytons, though, had something that set them apart from more normal sources of interference. They showed dispersion measures (DMs) that were roughly similar to genuine astrophysical signals, their swept frequencies mimicking signals that have moved through deep space.

For more on dispersion measures and their uses, see Fast Radio Bursts: SETI Implications?, which ran ten days ago in these pages. But as that article notes, we have to make a distinction between fast radio bursts (FRBs) and perytons, the former still enigmatic and evidently from non-local sources, the latter now understood to be the product of human technology. The Parkes authors are careful to make this distinction in the concluding paragraphs of their paper. 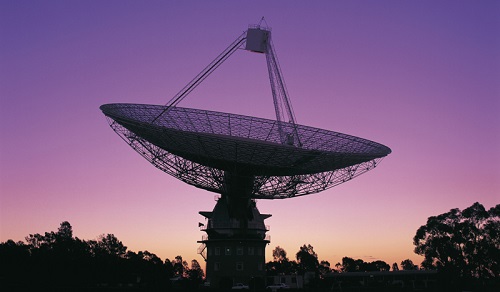 The paper on the Parkes work is “Identifying the source of perytons at the Parkes radio telescope” (citation below). Lead author Emily Petroff and team describe their use of radio frequency interference monitoring equipment at Parkes as well as the Australia Telescope Compact Array (about 400 kilometers north of Parkes) to chase down the culprit. In January, the team detected three perytons, syncing with the detection of the signals by the telescope itself.

What the RFI equipment detected were emissions in the frequency range 2.3 ~ 2.5 GHz consistent with the 1.4 GHz peryton event, indicating to the researchers that the 1.4 GHz millisecond bursts were associated with the episodes of 2.4 GHz emission. From the paper:

The 2.3 – 2.5 GHz range of the spectrum is allocated to “fixed”, “mobile” and “broadcasting” uses by the Australian Communications and Media Authority, and includes use by industrial, scientific and medical applications, which encompasses microwave ovens, wireless internet, and other electrical items. This suggests that the perytons may be associated with equipment operating at 2.3 ∼ 2.5 GHz, but that some intermittent event or malfunctioning, for example, from the equipment’s power supply, is resulting in sporadic emission at 1.4 GHz.

We also learn that although peryton detections at 1.4 GHz coincide with episodes where there is a higher-frequency emission, the higher frequency emission can occur without an associated peryton. The RFI monitor data tell the tale: Several hundred spikes of emission at 2.3 ~ 2.5 GHz occurred during the investigation period. The events clustered in time of day and tended to occur during the daytime, a finding consistent with microwave oven use or the use of other electrical equipment. It remained to attempt the ‘recreation’ of a peryton to test the theory.

Tests in February and March involved running the three microwaves in close proximity to the telescope at both high and low power. Details are in the paper and I won’t go further into them other than to note that the decisive moment evidently came on the 17th of March, when the microwave cycle was interrupted by opening the door. The paper describes three bright perytons produced from the staff kitchen microwave at times exactly coinciding with the opening of the microwave oven door.

Looking at earlier peryton detections, the authors found that of the 46 perytons detected at Parkes since 1998, more than a third of the total occurred within a short period on a particular day in 1998. Again, the microwave seems clearly implicated in a specific usage scenario:

…we find that indeed eight of the 15 intervals between consecutive events fall within the range 22.0+/-0.3 seconds, which is exceedingly unlikely to have been produced by manually opening the oven. Rather, we believe that the operator had selected a power level of less than 100%, causing the magnetron power to cycle on and off on a 22-second cycle, the period specified in the manufacturer’s service manual and confirmed by measurement. It appears likely that over this seven-minute period the oven produced a peryton on all or most completions of this 22-second cycle but that the operator stopped the oven manually several times by opening the door, each time restarting the 22-second cycle.

In other words, the oven’s magnetron can push out a signal when the door is opened prematurely — the magnetron is still in its shut-down phase and is producing emissions. The staff kitchen and visitors center at the observatory are the sites implicated in peryton production.

So we have three new peryton detections, allowing the researchers to correlate them with strong local emissions at 2.3 ~ 2.5 GHz, and further tests that show that perytons can be generated with microwave ovens on the site. The authors end the paper by stressing that the strong indications that perytons are man-made do not apply to fast radio bursts (FRBs), which they believe are of astronomical origin. In particular, FRB 010724, the so-called ‘Lorimer Burst,’ is not consistent with the peryton data. The authors declare it a genuine FRB, not a peryton.

The paper is Petroff et al., “Identifying the source of perytons at the Parkes radio telescope,” submitted to Monthly Notices of the Royal Astronomical Society (preprint). Nadia Drake does a fine job with the story for National Geographic in Rogue Microwave Ovens Are the Culprits Behind Mysterious Radio Signals.