We need to improve the way we handle data tracking and deep space navigation. While the near term is always uncertain because of budgetary issues, we can still take the long view and hope that we’re going to see a steadily increasing number of robotic and human spacecraft in the Solar System. That puts a strain on our existing facilities, and a premium on any methods we can find to make data return more precise and navigation more autonomous.

With these ideas in mind, keep your eye on the Deep Space Atomic Clock (DSAC). It’s a NASA technology demonstrator mission being built to validate a miniaturized, ultra-high precision mercury-ion atomic clock that researchers believe will be 100 times more stable than today’s best navigation clocks. Managed at the Jet Propulsion Laboratory, the DSAC has been tweaked and improved to the point where it allows drift of no more than a single nanosecond in ten days. 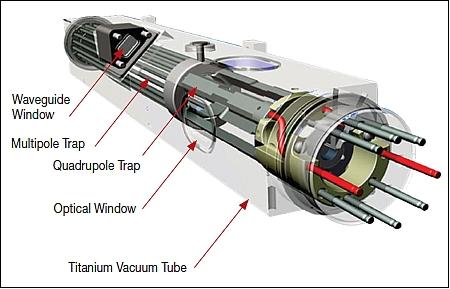 Image: Drawing of the DSAC mercury-ion trap showing the traps and the titanium vacuum tube that confine the ions. Credit: NASA/JPL.

We need improved atomic clocks in space to take spacecraft navigation to the next level and permit the next generation of studies of distant targets like Europa. Assuming Europa does have a subsurface ocean, this body of water will clearly be affected by tidal effects from Jupiter. Atomic clock measurements of DSAC’s caliber will be needed to provide the tracking data we’ll use to estimate Europa’s gravitational tide, helping to confirm the characteristics of its putative ocean. More on this thought and on the background of the DSAC in this JPL news release.

Europa, of course, is but one target whose investigation will be enhanced by projects like DSAC. Beyond this, improving the accuracy and stability of atomic clocks can change the way deep space navigation is done. Right now, we use a two-way paradigm for radiometric tracking, meaning that the same ground-based frequency standard is used as a reference for an uplink signal and a downlink detector. In other words, we track a spacecraft with our network on Earth and a ground-based team performs the necessary navigation. Improving the DSAC to allow it to operate in deep space will create a one-way tracking paradigm and autonomous navigation.

Think of the GPS unit you probably use to navigate with when you drive. GPS offers a one-way signal requiring no return signal from your car. The goal is to create the same one-way capability in deep space navigation. The smaller clock error (and DSAC is expected to be stable to less than 3 X 10-15 at one day, as measured by its Allan Deviation, a measure of frequency stability) enables one-way tracking with accuracies equal to or better than the two-way methods we currently use, a more flexible and efficient space navigation system.

The benefits of such a system will be striking, particularly in scenarios where we have several spacecraft either in orbit around or on the surface of a planet (Mars is the obvious reference for now). Let me pull a quote from Thornton and Border’s Radiometric Tracking Techniques for Deep-Space Navigation (Wiley, 2003):

…a single deep space antenna can acquire one-way Doppler and telemetry simultaneously from all spacecraft. Multiple uplink signals are not required. Consequently, this configuration results in more efficient use of ground-based resources and enhances orbit solutions and lander position estimates through the use of differential measurements.

Moreover, we get better signal-to-noise ratios for receiving spacecraft telemetry. Thornton and Border go on to explain the two reasons for this:

…one-way transmissions provide better short-term (< 1 s) stability, resulting in less signal loss in the detection process. This is because the short-term stability of two-way transmissions is degraded by solar plasma scintillations of the uplink signal and, for more distant spacecraft, by thermal noise in the spacecraft receiver. Second, the ground antennas are configured in a listen-only mode for one-way tracking, whereas the more complicated diplexer mode, required for simultaneous uplinking and downlinking, increases the effective system noise temperature of the ground receiver.

So DSAC technology can be a game-changer for deep space navigation, assuming the system checks out in flight. The plan is for the demonstration unit to be launched in 2016 aboard a SpaceX Falcon 9 Heavy booster, hosted on a spacecraft provided by Surrey Satellite Technologies. The equipment will be operated for at least one year, making use of GPS satellite signals to demonstrate precision orbital determination. Todd Ely (JPL), principal technologist for the DSAC Technology Demonstration Mission, describes the testing:

“Our in-orbit investigation has several phases beginning with commissioning, where we start up the clock and bring it to its normal operating state. After that we’ll spend the first few months confirming and updating our modeling assumptions, which we will use to validate the clock’s space-based performance. With these updates and our observation data, we’ll spend the next few months determining DSAC’s performance over many time scales…from seconds to days.” 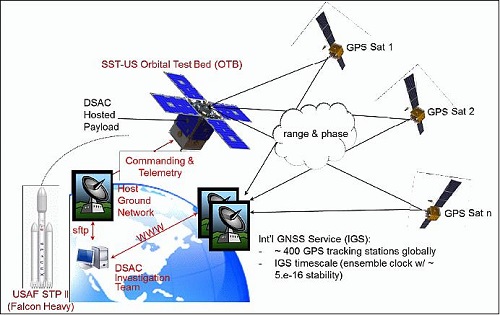 Following that period, the team will monitor clock telemetry to characterize its potential for long-term operations. The initial DSAC flight aims at producing the data that will help to make future units smaller and more efficient, readying them for the lengthy mission times that exploring deep space will demand. The kind of tracking data such a refined atomic clock will make available will improve spacecraft navigation and allow the precise tracking data we’ll need as we explore the moons of the gas giants and prepare for future targets even further out.