It was natural enough that Richard Carrigan would come up with the model for what he called ‘Fermi bubbles,’ which I invoked in Monday’s post. A long-time researcher of the infrared sky, Carrigan (Fermi National Accelerator Laboratory, now retired) had mined data from the Infrared Astronomical Satellite (IRAS) in 2009 to mount a search for interesting sources that could be Dyson spheres, entire stars enclosed by a swarm of power stations, or conceivably wrapped entirely by a sphere of material presumably mined from the planetary population of the system.

Carrigan’s work on infrared sources goes back well over a decade, involving not only data mining but theorizing about the nature of truly advanced civilizations. If we were to find a civilization transforming a galaxy by gradually building Dyson spheres to exploit all the energies of its stars, we would be witnessing the transformation from Kardashev Type II (a culture that uses all the power of its star) to Type III (a culture that exploits its entire galaxy’s energies. Carrigan reasoned that areas of such a galaxy would gradually grow dark in visible light, the signature of the civilization’s activities becoming traceable only in the infrared.

Both Carrigan and the researchers in the Glimpsing Heat from Alien Technologies (G-HAT) project at Penn State point out that there are natural phenomena that could mimic the Fermi bubble. In a recent paper, the G-HAT team led by Jason Wright mentions a kind of galaxy known as a flocculent spiral as a case in point. Unlike the classic spiral with well-defined structure, these are galaxies with discontinuous spiral arms. What might be perceived as a ‘bubble’ structure here would almost certainly be a natural feature. 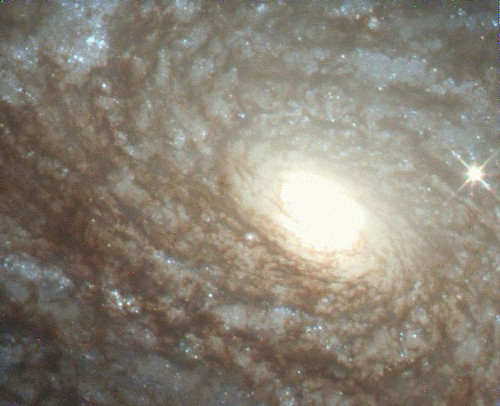 Image: NGC 4414, a flocculent spiral galaxy in an image taken by the Hubble Space Telescope. It would be tricky business to find the signature of a Fermi bubble here given the lack of definition in the spiral arms. A bright foreground star from our Milky Way Galaxy shines in the foreground of the image. Credit: Olivier Vallejo (Observatoire de Bordeaux), HST, ESA, NASA.

But I think the G-HAT critique of the Fermi bubble idea truly gains strength when we consider the motion of stars in the galaxy vs. the times needed for galactic colonization to occur. For we have to remember that when we’re dealing with a galaxy of stars over billions of years, we have to set the galaxy in motion. In a 2014 paper cited on Monday, Wright and company note this:

The static model of stars, in which a supercivilization can be said to occupy a compact and contiguous region of space, is a reasonable approximation for short times (≲ 105 years) and in the case of fast ships (with velocities in significant excess of the typical thermal or orbital velocities of the stars, so ∼ 10−2 c). In such cases, the stars essentially sit still while the ships move at a significant fraction of c and populate a small region of the galaxy in some small multiple of the region’s light-crossing time.

Remember that the shorter the period for colonization, the briefer the ‘window’ for finding a Fermi bubble. But would such bubbles be apparent even assuming the slowest possible expansion?

The G-HAT team’s work makes a compelling case that they would not. For longer times, and assuming slower ships, the static model fails and fails badly. Stars do not stay in one place, and galactic rotation muddles the works. The G-HAT paper considers what it calls ‘conservative timescales’ for a ‘slow’ colonization of the Milky Way. We can use this work to consider a maximum galaxy colonization time to give us a sense of how apparent galactic colonization would be. It also has ramifications, and significant ones, for Michael Hart’s view that we are alone in the galaxy, but I’m not going to stray from the Fermi bubble question in this post.

Imagine that a single spacefaring civilization emerges that uses colony ships traveling at 10-4 c, a speed not so different from our own interplanetary probes. Also assume a very slow launch rate, so that a ship is launched every 104 years, with a maximum range of 10 parsecs. This is slow travel indeed: The travel time to the nearest stars in this scenario is roughly 105 years, a time during which 10 more ships will be launched. The paper explains that this travel speed is comparable to the velocity dispersion of stars in the galactic midplane, a fact that brings new stars into range of the colony ships.

This is an expansion without pause because as the stars mix locally, a stellar system can continue to populate the ten nearest stars every 105 years:

To first order, the stellar system can thus continue to populate the 10 nearest stars every 105 years, without immediately saturating its neighborhood with colonies or the need to launch faster or longer-lived colony ships to continue its expansion. Further, arrival of the colony ships at the nearby stars should not be modeled as a pause in the expansion of the civilization. Rather, the colonies themselves will continue to travel at these speeds with respect to the home stellar system, and themselves encounter fresh stars for colonization every 105 years, during which time they can also launch 10 colony ships.

Using halo stars, which have high relative velocities in relation to the disk, for gravitational assists can provide a boost in cruise speed that allows higher speeds. We wind up with the capability of crossing the galaxy on a galactic rotational timescale. Here is a model of slow expansion that is anything but the uniform growth imagined in a static field of stars:

The slow expansion of an ETI should thus be modeled not as an expanding circle or sphere, subject to saturation and “fronts” of slower-expanding components of the supercivilization. A better model is as the mixing of a gas, as every colonizing world populates the stars that come near it, and those stars disperse into the galaxy in random directions, further “contaminating” every star they come near. If halo stars are themselves colonizable, then those that counter-rotate and remain near the plane will provide even faster means of colonization, since they will encounter ∼ 10 times as many stars per unit time as disk stars.

Here again we note the key fact that this stellar motion obscures any well-defined Fermi bubble:

Non-circular orbits also provide significant radial mixing, and Galactic shear provides an additional source of mixing that is comparable to that of the velocity dispersion of the disk stars once the colonies have spread to vrot/σv ∼ 1/10 of galaxy’s size, or ∼ 1 kpc from the home stellar system.

Remember, these are extremely conservative assumptions, and they still show that when a civilization begins to colonize its nearest stars, it will populate the entire galaxy in no more than 108 to 109 years. The maximum timescale for galactic colonization is found to be on the order of a galactic rotation (108 years) even for present-day probe speeds. This has implications for the detectability of Fermi bubbles, for on a rotational timescale, such bubbles will be subject to rotational shear and thermal motions that disperse and ‘mix’ them. Or as Centauri Dreams regular Eniac put it in a comment yesterday, “Such bubbles would be sheared into streamers in relatively short order. The spread of civilization would look more like milk stirred into coffee than a clearly delineated expanding bubble.”

The upshot here is that it will be only during a fairly brief period of a galaxy’s history that a spacefaring civilization will have populated only a single contiguous part of that galaxy. The length of that time depends upon how fast the civilization is capable of expanding — the faster the expansion, the shorter the time to observe the interim period between Kardashev Levels II and III. The transition between this era and the galaxy-spanning civilization to follow is, by galactic standards, relatively brief. And if we assume the slowest possible expansion, our Fermi bubbles would be quickly obscured by natural stellar motion within the galaxy. Fermi bubbles, if they do exist, are going to be exceedingly hard to find.

The paper is Wright et al., “The Ĝ Infrared Search for Extraterrestrial Civilizations with Large Energy Supplies. I. Background and Justification,” The Astrophysical Journal Vol. 792, No. 1 (2014), p. 26 (abstract / preprint). I consider the SETI work that Jason Wright and his colleagues Matthew Povich and Steinn Sigurðsson are doing with the Glimpsing Heat from Alien Technologies project to be ground-breaking, and plan to check in with it often.