Our definition of the habitable zone is water-based, focusing on planetary surfaces warm enough that liquid water can exist there. New work by Steven Benner (Foundation for Applied Molecular Evolution) and colleagues considers other kinds of habitable zones, specifically those supporting hydrocarbons, which can be liquids, solids or gases depending on the ambient temperature and pressure. Benner’s work focuses on compounds called ethers that can link together to form polyethers, offering life a chance to emerge and adapt in hydrocarbon environments.

Out of this comes the notion of ‘warm Titans,’ moons with hydrocarbon seas that are not made up of methane. We have no such worlds in our Solar System, and they needn’t be moons of gas giants to fit the bill. Think of them, as this Astrobio.net news release does, as being oily Earths drenched in hydrocarbons like propane or octane. Although they do not appear in any genetic molecules on Earth, ethers may be the key to fill the function of DNA and RNA on such worlds.

The nucleobases in the four-letter code of DNA and RNA can mutate even as the molecule’s form is retained, and out of this come the proteins that help life interact and adapt with its environment. Like DNA, ethers show repeating elements, in this case of carbon and oxygen, in their chemical backbones. But unlike DNA and RNA, they have no outward negative charge of the kind that lets them dissolve and float freely so they can interact with other biomolecules. Says Benner:

“This is the central point of the ‘polyelectrolyte theory of gene,’ which holds that any genetic biopolymer able to support Darwinian evolution operating in water must have an ever-repeating backbone charge. The repeating charges so dominate the physical behavior of the genetic molecule that any changes in the nucleobases that influence genetic information have essentially no significant impact on the molecule’s overall physical properties.”

Molecules like DNA and RNA cannot dissolve in a hydrocarbon ocean, making them unable to provide the necessary interactions on worlds like Titan. But ethers, strung together in complex polyethers, while they lack an outward charge, do have internal charge repulsions that allow small parts of the molecule to function in ways similar to DNA and RNA nucleobases. 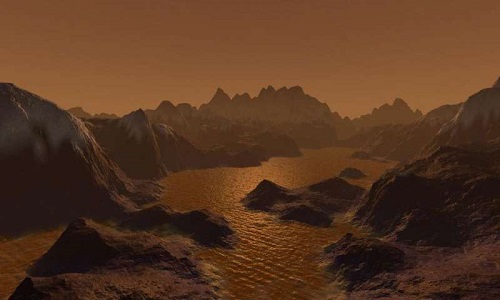 Image: An artist’s impression of the low-lit surface of Titan under the moon’s thick, orange haze, with liquid hydrocarbons pooling and eroding the surface much like water on Earth. Credit: Steven Hobbs (Brisbane, Queensland, Australia).

Benner’s experiments with ethers show that they are not soluble when we get down to temperatures as low as Titan’s, making Saturn’s largest moon an unlikely venue for such life. But while methane has a narrow liquid range (between -184 and -173 degrees Celsius), we can still put ethers to work in warmer hydrocarbon oceans. Thus the emergence of the ‘warm Titan,’ a world perhaps covered with propane instead of methane oceans that can stay liquid over a broad range (-184 degrees Celsius to -40 degrees). Octane turns out to be even better, not freezing until it reaches -57 degrees Celsius or vaporizing until it hits a temperature of 125 degrees.

Thus hydrocarbon molecules larger than methane come to the rescue. Once again we reconsider the notion of a habitable zone. Certainly in terms of life that we are familiar with, liquid water at the surface is a prerequisite. But as we’ve seen on the icy moons of our system’s gas giants, oceans can provide subsurface environments where life could conceivably emerge. Now we have to consider a hydrocarbon habitable zone where propane or octane can exist in a liquid state. “Virtually every star,” says Benner, “has a habitable zone for every solvent.”

The paper is Christopher et al., “Solubility of Polyethers in Hydrocarbons at Low Temperatures. A Model for Potential Genetic Backbones on Warm Titans,” Astrobiology Vol. 15, Issue 3 (11 March 2015). Thanks to Ivan Vuletich for the pointer to this one.