It was a worrisome eight days, but LightSail has broken its silence with an evident reboot and return to operations, sending telemetry to ground stations and taking test images. We now have sail deployment possibly as early as Tuesday morning EDT (15:44 UTC), but according to The Planetary Society’s Jason Davis, much will depend on today’s intensive checkout.

“Our LightSail spacecraft has rebooted itself, just as our engineers predicted. Everyone is delighted. We were ready for three more weeks of anxiety. In this meantime, the team has coded a software patch ready to upload. After we are confident in the data packets regarding our orbit, we will make decisions about uploading the patch and deploying our sails— and we’ll make that decision very soon. This has been a rollercoaster for us down here on Earth, all the while our capable little spacecraft has been on orbit going about its business. In the coming two days, we will have more news, and I am hopeful now that it will be very good.” 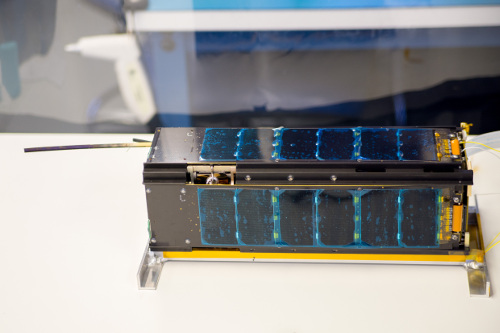 Image: LightSail-A back in August of 2014 during a testing period at Cal Poly. The craft is a three-unit CubeSat no larger than a loaf of bread, but it packs 32 square meters of sail inside. Four metal booms will, if all goes well, unfold the craft’s four triangular sails. Credit: The Planetary Society.

What we get from Davis is largely positive (see LightSail Team Prepares for Possible Tuesday Sail Deployment). The diminutive craft made twelve passes over the Cal Poly and Georgia Tech ground stations on Sunday, returning 102 data packets. You’ll recall that errant software was suspected in LightSail’s problems, with engineers crafting a software patch that they tried unsuccessfully to upload. The trick is that the satellite is tumbling, able to receive some commands and transmit data, but lacking the kind of stable downlink that would allow the software changes to be made. For that reason, the patch idea is now being abandoned.

Instead, a series of reboots will keep the beacon.csv file reset so that it doesn’t fill up and crash the system. Understandably, the LightSail team wants to begin sail deployment as soon as it is safe to do so. We should have a final decision on a possible Tuesday deployment by Monday night. We’re going to find out what effect the spacecraft’s tumble has on sail deployment the hard way. As Davis noted in an earlier post:

… the rotation rate has increased from -7, -0.1 and -0.3 degrees per second about the X, Y, and Z axes to 10.8, -7.3 and 2.9 degrees. The cause for the tumbling uptick currently unknown, but with the spacecraft’s attitude control system offline [see What Images Will We Get Back from the LightSail Test Mission?], sail deployment is likely to be a wild ride.

The best Tuesday ground pass window begins at 11:44 EDT. To keep up with the latest, follow Jason’s Twitter account @jasonrdavis, and we’ll see just how wild a ride it is. Remember, this mission is not designed to demonstrate controlled solar sailing, but serves as a test of the craft’s attitude control system and sail systems before it is pulled back into the Earth’s atmosphere. The tumbling we’re seeing now is obviously a concern because just next year the next LightSail mission is scheduled to perform controlled Earth-orbit sail flight. We’re going to need to find the bugs in this spacecraft’s attitude control system long before then.