The View from Outside the Galaxy

The Russian Federal Space Agency (Roscosmos) has recently released a video (viewable here on YouTube) showing how a number of celestial objects might look if they were substantially closer to Earth than they are. The image of the Andromeda galaxy and its trillion stars projected against an apparent Earthscape is below. Unfortunately, this seems to be an astronomical image inserted into a view that purports to show what we would see in visible light. What we would actually see if we were standing in such a location is much different. After all, astronomical images are teased out of lengthy exposures in carefully chosen wavelengths. 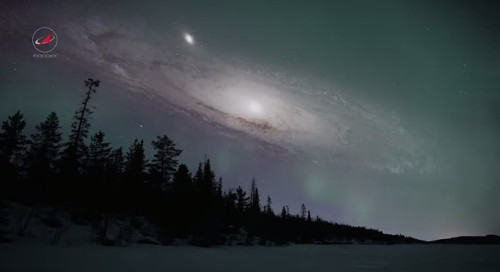 In reality the Andromeda galaxy is gigantic even when viewed from 2.5 million light years, but I doubt the average person has any idea where it is in the sky. Although considerably wider than the Moon as seen from Earth, M31 is visually faint, a fact that reminds us of the importance of photographs and charged coupled devices (CCDs) in light gathering as we probe the universe. The human eye is a very limited instrument. As it happens, I’m currently reading Alan Hirshfeld’s Starlight Detectives: How Astronomers, Inventors, and Eccentrics Discovered the Modern Universe (2014), which examines the transition between sketches of visual observations and the steady advances in photography in the 19th Century that brought so much more of the galaxy into view.

About a year ago I looked at Poul Anderson’s novel World Without Stars, which tells of a starship crew dispatched to a planet far outside the Milky Way, a place where from 200,000 light years, galaxy-rise is a rather muted event (see The Milky Way from a Distance). Anderson depicts a galaxy filling 22 degrees along its major axis, but one that appears ‘ghostly pale across seventy thousand parsecs.’ In the same issue of Analog (June, 1966) in which the novel was originally serialized, John Campbell published Anderson’s letter describing the calculations that went into that description, and explaining why the galaxy from outside would be so dim.

But it’s not just the distance. Galaxies, as UC-Santa Cruz astrophysicist Greg Laughlin has explained on his systemic site, are mostly empty space, or as he puts it, “To zeroth, to first, to second approximation, a galaxy is nothing at all.”

Interesting, then, to think about recent work on mapping the galaxy. The WISE mission (Wide-Field Infrared Survey Explorer) produced the data used in this effort to improve our understanding of the Milky Way’s spiral arm structure. Precisely because we don’t have the kind of overview of the galactic disk referred to above, we’re trying to sense the shape of our galaxy from within a disk obscured by dust and seen from our vantage two-thirds of the way out from the galaxy’s center. The new work supports a four-arm model for the Milky Way.

To derive this result, Denilso Camargo (Federal University of Rio Grande do Sul, Brazil) and team worked with WISE data revealing over 400 embedded star clusters, stellar nurseries of the kind that form in the dust- and gas-packed spiral arms, where most stars originate. Usefully for the purposes of the study, young clusters like these have not had the chance to drift out of the arms, thus providing a powerful tool for visualizing spiral arm structure.

In the paper, Camargo and team investigated 18 embedded clusters, seven of which are newly discovered in the WISE images — this complements a list of 437 new clusters Camargo recently published. The work supports the hypothesis that embedded clusters are predominantly found in the galactic thin disk and along its spiral arms. The Perseus and Scutum-Centaurus arms are the most prominent, while the Sagittarius and Outer arms show fewer stars but appear to have the same amount of gas as the other two arms. 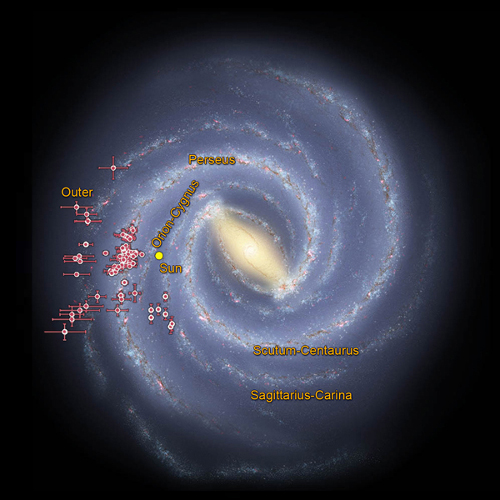 Image: This illustration shows where WISE data revealed clusters of young stars shrouded in dust, called embedded clusters, which are known to reside in spiral arms. The bars represent uncertainties in the data. The nearly 100 clusters shown here were found in the arms called Perseus, Sagittarius-Carina, and Outer — three of the galaxy’s four proposed primary arms. Credit: NASA/JPL-Caltech/Federal University of Rio Grande do Sul.

Our Sun is in a minor arm called Orion Cygnus, marked on the image. You can see what a mapping challenge it is to work out, from within the disk itself, what kind of spiral arm structure exists. What we wouldn’t give for a perspective like the one above…

Supernovae in the Deep

Backing out to see the galaxy whole would take us far into intergalactic space, where we’re also learning about three supernovae found between galaxies in large galactic clusters. Melissa Graham, a UC-Berkeley postdoc, is the leader of a study of these objects. She also turns out to be a science fiction fan, one whose reference to the intergalactic deep isn’t the Anderson story I cited above, but Iain Banks’ novel Against a Dark Background (Orbit, 2009). There, the planet Golter lies a million light years from the nearest star.

We can imagine Anderson’s pale galaxy in an otherwise starless night sky, and Banks’ as well. Planets around the three supernovae in Graham’s study would have been destroyed in the event, but if there were any before, their night skies would likewise have been depleted of stars. “It would have been a fairly dark background indeed,” Golter adds, “populated only by the occasional faint and fuzzy blobs of the nearest and brightest cluster galaxies.”

Graham’s work using Hubble Space Telescope imaging confirms the earlier discovery (at the Canada-France-Hawaii Telescope on Mauna Kea) of the three supernovae and shows that they reside in a population of solitary stars in regions where the density of stars is about a million times less than we see from Earth. Gravitational interactions in massive galactic clusters can sometimes fling as many as 15 percent of a single galaxy’s stars out of the main disk, though the stars remain gravitationally bound within the cluster itself. Stars like these are going to be all but invisible unless they explode as Type Ia supernovae. Their explosions thus prove useful as a way to study the broader population of intracluster stars.

We have shown that the SN Ia in Abell 399 was very likely hosted by a faint red point-like source that has a magnitude and color consistent with both dwarf red sequence galaxies and red GCs. Our statistical analysis of the expected surface densities has shown that a dwarf galaxy is less likely at that location than a GC, due to the presence of a nearby elliptical galaxy. We have demonstrated that the rate enhancements in dwarfs or GCs implied by this new faint host are plausible under current observational constraints, and we do not reject either hypothesis.

Image: One of the four supernovae (top, 2009) may be part of a dwarf galaxy or globular cluster visible on the 2013 HST image (bottom). Credit: Melissa Graham, CFHT and HST.