My view is that the spacecoach, the subject of renewed discussion below by Brian McConnell and a design he and Alex Tolley have created, is the most innovative and downright practical idea for getting crews and large payloads to the planets that I’ve yet encountered. It’s low-cost and uses ordinary consumables as propellant, dramatically revising mission planning. Brian and Alex have continued refining the concept, as explained below in Brian’s essay on a modified version of the rocket equation. Have a look and you’ll see that planning long duration missions or missions with larger crews becomes a much more workable proposition because more consumables translate into more propellant. Could the spacecoach be our ticket to building a space-based infrastructure, with unmistakable implications for even deeper space?

The spacecoach, first introduced here in Spaceward Ho! and A Stagecoach To The Stars and on spacecoach.org, is based on the idea of using consumables waste streams, such as water, CO2 and gasified waste, as propellant in solar powered electric engines. The idea is to turn what is normally dead weight (and a lot of dead weight on a long duration mission such as to Mars) into propellant. This in turn leads to dramatic reductions in mass, and thus mission cost, because a ship that uses waste from consumables as propellant no longer needs an external stage weighing several times as much to push it to its destination. (If you or your colleagues are working on electric propulsion systems and have test data and citations to share see below) 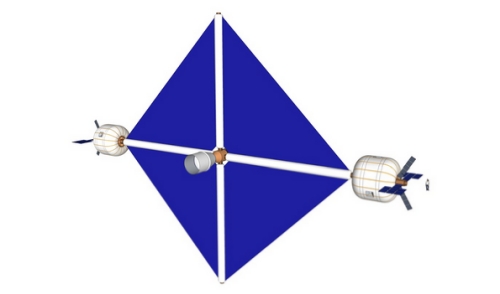 Image: The spacecoach. Credit: Rendering by Rüdiger Klaehn based on a design by Brian McConnell.

To understand the impact this has, we developed a modified version of the rocket equation that leads with the crew consumable requirements for a given mission, and then calculates the level of engine performance required to fly the mission using only consumables waste streams (mostly water and carbon dioxide) as propellant. This, in turn, yields a minimum mission cost, as no surplus propellant is required, so the mission cost is reduced to the cost to deliver the crew and consumables to the starting point (while the ship itself is reusable so its construction and launch cost can be amortized across many missions).

The rocket equation, shown below, predicts the ship’s delta-v (change in velocity), as a function of specific impulse (a measure of engine performance) and the ship’s mass ratio (starting mass divided by ending mass).

The spacecoach equation, shown below, predicts the minimum exhaust velocity (or specific impulse) required for a cost optimized mission as a function of its delta v and consumables budget.

For programmers, this can also be written in pseudocode as:

Let’s consider a ship that has a 40,000 kg hull mass when empty that is being resupplied for a trip to the Martian moons from EML-2 (Earth Moon Lagrange point 2). With low thrust propulsion this requires a delta-v of roughly 18 km/s roundtrip. The ship has a six person crew, with a 15 kg/person-day budget for water, food and oxygen. The mission is expected to last 600 days, so the consumables budget is 54,000kg.

According to the equation, the engines will need to achieve an exhaust velocity of 21 km/s, which equates to a specific impulse of about 2,100s, assuming 100% of the waste streams are reclaimed (if engines can be made to work with gasified waste, even solids such as trash should be usable as propellant). If we assume that some percentage of the consumables waste streams (e.g. solid waste) cannot be used, say 20%, the engines will need to operate at a specific impulse of 2,900s. This is within the performance envelope of Hall effect thrusters, as well as several other electric propulsion technologies. If the engine performance is not quite good enough, that’s ok, the ship would just be loaded with more water than the crew really needs to compensate for this, or could even support a larger crew. This will increase costs a bit above the minimum possible cost, but also provide safety reserves above what the crew is projected to need.

Next, let’s compare the mass budget for a similar ship using chemical propulsion (e.g. LOX + methane). This mission requires much less delta-v as the ship can exploit the Oberth effect (aka powered flyby) when departing Earth, and on arrival at Mars. To give the chemical ship a further advantage, we’ll assume it uses aerobraking for Mars capture and for Earth return. So the round trip delta-v in that scenario is roughly 8 km/s. The downside is the engine specific impulse is much lower, about 360s for oxygen + methane. Plugging this into the rocket equation results in a propellant mass budget of almost 820,000 kg, over twenty times the mass of the empty hull. This can be optimized by shedding mass, such as waste, spent stages, etc, but not by a great deal without making compromises in terms of consumables, payload, etc (and we’ve already given the chemical ship a big advantage by assuming it can use aerobraking extensively to minimize propulsive delta-v).

Compare this with the spacecoach, where the consumables are the propellant. It would require the delivery of only 54,000 kg of consumables. This is 1/15th what is required for the conventional mission, and should lead to comparable reductions in overall mission costs. Meanwhile the mission itself is much simpler and less risky (all low thrust propulsion, no chemical rockets with catastrophic failure modes, no high G maneuvers, no aerobraking, plus the option to add more crew and/or consumables with little penalty).

The savings come from two sources. Because the consumables are the propellant, there is no need for external propellant. This effect is amplified further because electric engines have much higher exhaust velocities than chemical rockets so even the relatively small consumables mass needed by the crew is sufficient to propel the ship (if electric engines operated at a specific impulse comparable to a chemical rocket, you’d need ten times more water than the crew would consume).

And it gets even better. This is counterintuitive, but it is actually easier to plan for long duration missions with larger crews and high delta v (Ceres, Venus and the Asteroid Belt for example). This is because more consumables = more propellant = higher delta-v given the same engine performance, whereas in a conventional ship you get into a vicious circle of mass incurring more mass. Running the numbers for a 6 person, 1000 day mission to Ceres (delta v : 26.5 km/s roundtrip from EML-2), the consumables budget is 90,000 kg, and the required engine specific impulse is again in the 2000s, which suggests that a ship capable of reaching Mars will be capable of reaching Ceres due to the larger consumables budget.

And speaking of Ceres, it is an enormous water reservoir. While early spacecoaches would be supplied entirely from the Earth, developing the ability to extract water from low gravity sites like Ceres, and possibly the Martian moons, will be a priority as it will reduce the need to launch water from Earth, and thus further reduce operating costs, but even without in situ resource utilization, spacecoaches will be an order of magnitude cheaper to operate, and will be capable of reaching destinations like Ceres that simply cannot be reached by humans using chemical propulsion.

While it takes people a while to see the implications of this (the thinking about how to design a spacecraft is pretty ingrained), the math is pretty straightforward and suggests that order of magnitude cost reductions for interplanetary missions, with greatly expanded range, will be possible with this approach.

If you are working on electric propulsion technology, we are compiling data about the relative performance of different technologies and propellants, especially as it relates to the use of water and waste gases, to provide the community with an easy to search repository of SEP test data and citations. This data will be made available at spacecoach.org as well as on github. If you’d like to submit test data and citations, you can use this form. Contact Brian McConnell at bsmcconnell@gmail.com for more information.