“This is the first clear evidence of faulting and surface disruption on Charon. New Horizons has transformed our view of this distant moon from a nearly featureless ball of ice to a world displaying all kinds of geologic activity.”

The most prominent crater, near Charon’s south pole, is almost 100 kilometers across, and evidently the result of a geologically recent impact. This NASA news release adds that the darkness of the crater floor may be the result of a different kind of icy material being exposed, less reflective than the ices on the surface. Another possibility: The ice of the crater floor has a larger grain size, reflecting less sunlight. This would be the result of ice melting during the impact event and re-freezing into larger grains. 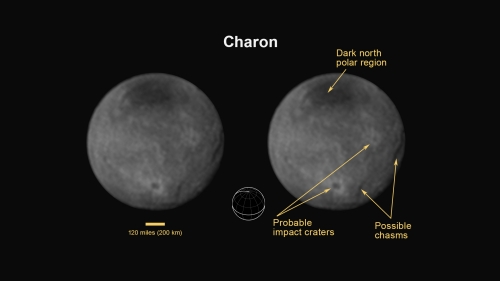 Meanwhile, the dark region near Charon’s north pole bears watching, with more detailed images coming up on the 14th.