A $100 Million Infusion for SETI Research

SETI received a much needed boost this morning as Russian entrepreneur Yuri Milner, along with physicist Stephen Hawking and a panel including Frank Drake, Ann Druyan, Martin Rees and Geoff Marcy announced a $100 million pair of initiatives to reinvigorate the search. The first of these, Breakthrough Listen, dramatically upgrades existing search methods, while Breakthrough Message will fund an international competition to create the kind of messages we might one day send to other stars, although the intention is also to provoke the necessary discussion and debate to decide the question of whether such messages should be sent in the first place.

With $100 million to work with, SETI suddenly finds itself newly affluent, with significant access to two of the world’s largest telescopes — the 100-meter Green Bank instrument in West Virginia and the 64-meter Parkes Telescope in New South Wales. The funding will also allow the Automated Planet Finder at Lick Observatory to search at optical wavelengths. Milner’s Breakthrough Prize Foundation is behind the effort through its Breakthrough Initiatives division, a further indication of the high-tech investor’s passion for science. 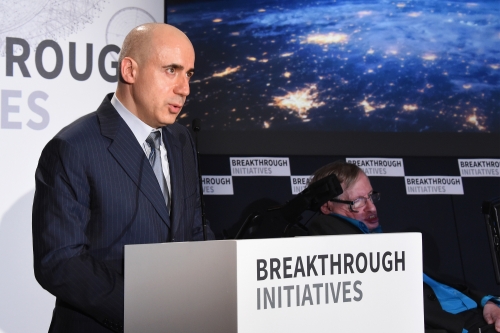 Organizers explained that the search will be fifty times more sensitive than previous programs dedicated to SETI, and will cover ten times more of the sky than earlier efforts, scanning five times more of the radio spectrum 100 times faster than ever before. Covering a span of ten years, the plan is to survey the one million stars closest to the Earth, as well as to scan the center of the Milky Way and the entire galactic plane. Beyond the Milky Way, Breakthrough Listen will look for messages from the nearest 100 galaxies.

According to the news release from Breakthrough Initiatives, if a civilization based around one of the thousand nearest stars transmits to us with the power of the aircraft radar we use today, we should be able to detect it. A civilization transmitting from the center of the Milky Way with anything more than twelve times the output of today’s interplanetary radars should also be detectable. At optical wavelengths, a laser signal from a nearby star even at the 100-watt level is likewise detectable.

Frank Drake noted the changes in technology that have made such searches possible:

“Today we have major developments in digital technology and also the necessary telescopes to monitor billions of channels at the same time. But we needed the funding to allow all this to proceed. Fortunately there are private benefactors who realize the significance of the search. We will finally have stable funding so we can plan from one year to the next. This will be the most enduring search ever launched, a great milestone and our best chance for success.”

Geoff Marcy (UC-Berkeley) pointed out that we simply have no idea whether the nearest civilization is ten light years or 10 million light years away, but the Breakthrough Listen project will attempt to find out by scanning 10 billion frequencies simultaneously.

“We will listen to the cosmic piano every time we point a radio telescope, but instead of 88 keys, we’ll be using ten billion keys, with software designed to pick out any note with a frequency that is ringing consistently true against the background noise of all the other frequencies.”

Milner spoke of bringing a ‘Silicon Valley approach’ to SETI, one that will develop its own software tools using open source methods and maintaining open databases. Organizers estimate that what Breakthrough Listen generates will amount to the largest amount of scientific data ever made available to the public. Thanks to its open source nature, the software effort will be flexible enough to allow scientists and members of the public to use it and to develop their own applications for data analysis. As part of the crowdsourced aspect of Breakthrough Listen, Milner announced that the effort will join the SETI@home project at UC-Berkeley, in which nine million volunteers donate spare computing power to assist in the SETI search.

The project leadership team listed on the Breakthrough Initiatives site: 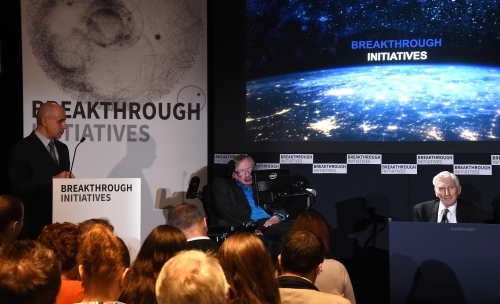 As to the Breakthrough Message initiative, it should be stressed that it is not an effort to actually send signals to other stars. This last is an important point, so let me quote directly from the news release: “This initiative is not a commitment to send messages. It’s a way to learn about the potential languages of interstellar communication and to spur global discussion on the ethical and philosophical issues surrounding communication with intelligent life beyond Earth.”

The news of these two Breakthrough Initiatives comes on July 20, the day humans first landed on the Moon in 1969. Hawking noted the scope of the challenge. We already know that potentially habitable planets are plentiful, and that organic molecules are common in the universe. Intelligence remains the great unknown. While it took 500 million years for life to evolve on Earth, it took two and a half billion years to get to multicelled animals, and technological civilization has appeared only once on our planet. Is intelligent life, then, rare? And if it exists, is it as fragile and as prone to self-destruction as we ourselves?

“We can explain the light of the stars through physics, but not the light that shines from planet Earth,” Hawking said. “For that, we must know about life, and acknowledge that there must be other occurrences of life in an infinite universe. There is no bigger question. We must know.”