If you’re a Centauri Dreams regular, you’re familiar with Adam Crowl, an Australian polymath who is deeply involved in the ongoing Project Icarus starship design study. Adam maintains a blog called Crowlspace where interesting and innovative ideas emerge, some of them related to earlier work that has been largely forgotten in our era. A recent post that caught my eye was on Ernst Stuhlinger’s ‘umbrella ship,’ a kind of spacecraft that, when introduced to the world on Walt Disney’s 1957 TV show Mars and Beyond, surely surprised most viewers.

The umbrella ship, as Adam notes, looks nothing like what readers of the famous space series in Collier’s (1952-1954) had come to associate with manned travel to other worlds. Wernher von Braun was then championing massive rockets to be engaged in the exploration of Mars, an exploratory operation that would send a fleet of vessels to the Red Planet. Unlike tiny capsules of the kind we used to reach Earth orbit and explore the Moon, these would be large vessels to be sent in great numbers. The expedition would be described by its designer in a book von Braun wrote in 1948 called Das Marsprojekt (translated into English in 1953).

What von Braun depicted and what both Collier’s and Disney immortalized was a fleet of ten spacecraft that would send 70 crew members to Mars, the spacecraft to be built in Earth orbit using reusable space shuttles. While von Braun radically revised the plan in 1956 and scaled it back substantially, Ernst Stuhlinger was working with an entirely different concept. 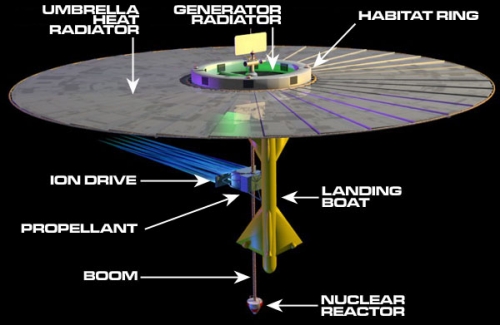 Image: Ernst Stuhlinger’s Umbrella Ship, built around ion propulsion. Notice the size of the radiator, which disperses heat from the reactor at the end of the boom. As Adam notes in his blog piece, the source for this concept was a Stuhlinger paper called “Electrical Propulsion System for Space Ships with Nuclear Power Source,” which ran in the Journal of the Astronautical Sciences 2, no. Pt. 1 in 1955, pp. 149-152 (online version here). Credit: Winchell Chung.

No chemical rockets for Stuhlinger. While von Braun envisioned his fleet using a nitric acid/hydrazine propellant, Stuhlinger was interested in electrical propulsion, producing thrust by expelling ions and electrons instead of combustion gases. He noted in the paper that using chemical reactions to produce thrust created a high initial mass as compared to the payload. To reduce this mass problem, he saw, it would be necessary to increase the exhaust velocity of the propellant. Accelerating propellant particles by electrical fields made the numbers more attractive, as the paper notes in its summary:

A propulsion system for space ships is described which produces thrust by expelling ions and electrons instead of combustion gases. Equations are derived from the optimum mass ratio, power, and driving voltage of a ship with given payload, travel time, and initial acceleration. A nuclear reactor provides the primary power for a turbo-electric generator; the electric power then accelerates the ions. Cesium is the best propellant available because of its high atomic mass and its low ionization energy. A space ship with 150 tons payload and an initial acceleration of 0.67 x 10-4 G, traveling to Mars and back in a total travel time of about 2 years, would have a takeoff mass of 730 tons. 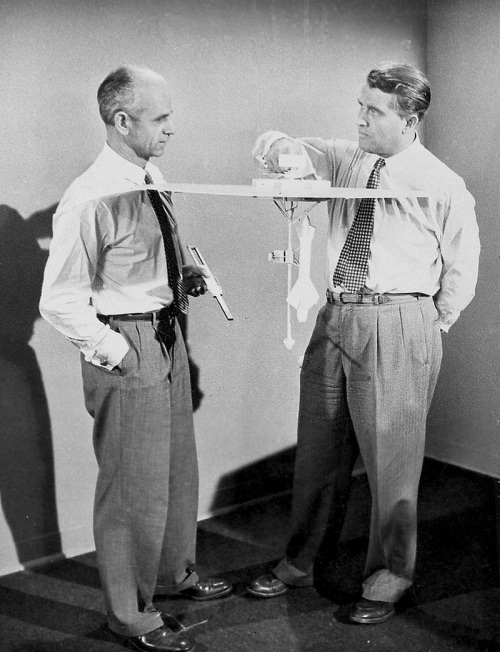 Adam works out the details, drawing from the Stuhlinger paper itself and deriving some quantities through his own work. We get a payload, including landing vehicle and crew habitat, that is about 20.5 percent of launch mass, an impressive figure indeed. We’re also saddled with low acceleration, as you would expect. The Umbrella Ship would take about a year to reach Mars, while a chemically propelled ship as analyzed by Stuhlinger would make the journey in about 260 days. The longer the travel time, the greater the hazard, which was in many ways unknown to Stuhlinger, as Adam comments:

These days we wouldn’t want a crewed vehicle spending weeks crawling through the Van Allen Belts, but back when Stuhlinger computed his trajectory and even when the design aired, the Belts were utterly unknown. Now we’d have to throw in a solar radiation “storm shelter” and I’d feel rather uncomfortable making astronauts spend two years soaking up cosmic-rays in interplanetary space. Even so, the elegance of the design, as compared with the gargantuan Von Braun “Der Mars Projekt” for example, is a testament to Stuhlinger’s advocacy of electric propulsion.

But what an interesting design to emerge in the 1950s, and it’s ironic given the above remark that when Explorer 1 was launched in 1958, Stuhlinger was at the controls of the timer that, in those relatively primitive days of space technology, handled rocket staging. Explorer 1 was the satellite that discovered the Van Allen belts in the first place. A German infantryman (he was wounded outside Moscow and later served at Stalingrad), Stuhlinger joined the German V-2 effort and worked closely with von Braun, later coming to the United States as part of Operation Paperclip. In the 1950s, he actively collaborated with von Braun on the Disney films Man in Space, Man and the Moon and Mars and Beyond.

Stuhlinger would spend a great deal of time on ion thrusters using either cesium or rubidium vapor, accelerating positively charged ions through a grid of electrodes. Today, he is considered a pioneer of ion propulsion, well known for his book Ion Propulsion for Space Flight (McGraw-Hill, 1964). He would serve as director of Marshall Space Flight Center’s Space Science Laboratory until 1968 and later as MSFC’s associate director for science, going on to become a professor at the University of Alabama in Huntsville and a senior research assistant with Teledyne Brown Engineering. Ernst Stuhlinger died in Huntsville in May of 2008.