Rosetta’s Day in the Sun

Today is perihelion day for the European Space Agency’s Rosetta orbiter and the doughty Philae lander that, we can hope, may still be taking data even if we can’t talk to it. Celebrating the event, ESA has made available a new interactive viewer based on images taken with Rosetta’s navigation camera (NAVCAM). At the end of July, almost 7000 NAVCAM images were available through the Archive Image Browser, a number that will increase as the mission continues. Now we have an interactive tool that taps all those NAVCAM images.

You can have a look at the tool here. With the ability to zoom in and out, rotate the view and move across the comet, the viewer adds features like texture maps and trajectory diagrams showing where various images of the comet were taken, linking to the NAVCAM database to allow downloads of the relevant images. ESA will also be doing a Google Hangout on what it’s calling Rosetta’s Day in the Sun at 1300 UTC (0900 EDT). Hard to believe we’ve already spent a year exploring Comet 67P/Churyumov-Gerasimenko, with lengthy investigations to follow.

Leading up to the event, we have this image of some of the activity on the comet. During the approach to perihelion, Rosetta’s activity has grown, as you can see in the outburst below.

Image: A short-lived outburst from Comet 67P/Churyumov–Gerasimenko was captured by Rosetta’s OSIRIS narrow-angle camera on 29 July 2015. The image at left was taken at 13:06 GMT and does not show any visible signs of the jet. It is very strong in the middle image captured at 13:24 GMT. Residual traces of activity are only very faintly visible in the final image taken at 13:42 GMT. Credit: ESA.

The spacecraft has to maintain its distance from the comet to avoid possible damage from debris. This one was taken from a distance of 186 km from the comet’s center. The jet is estimated to have a minimum speed of 10 meters per second. It’s coming from the rugged terrain around the comet’s neck, now known as the Anuket region (here again I thrill at the process of giving names to places humans have never seen before, just as we have been doing on both Pluto/Charon and Ceres. Our unforgettable summer of exploration continues).

“This is the brightest jet we’ve seen so far,” says Carsten Güttler, OSIRIS team member at the Max Planck Institute for Solar System Research (Göttingen). “Usually, the jets are quite faint compared to the nucleus and we need to stretch the contrast of the images to make them visible – but this one is brighter than the nucleus.”

What we’re seeing on the comet is the gradual warming of the comet’s ices, causing them to sublimate and carry dust with them into space. We’re also noting that areas of the comet that have been in darkness are now getting illumination, adding to the activity. The action should peak in coming weeks, but ESA warns that the outbursts are unpredictable and can occur at any time. The July 29 outburst was the strongest yet, actually pushing away the solar wind and magnetic field from around the nucleus and affecting the comet’s gaseous coma.

“This first ‘quick look’ at our measurements after the outburst is fascinating,” says Kathrin Altwegg (University of Bern), ROSINA principal investigator. “We also see hints of heavy organic material after the outburst that might be related to the ejected dust. But while it is tempting to think that we are detecting material that may have been freed from beneath the comet’s surface, it is too early to say for certain that this is the case.” 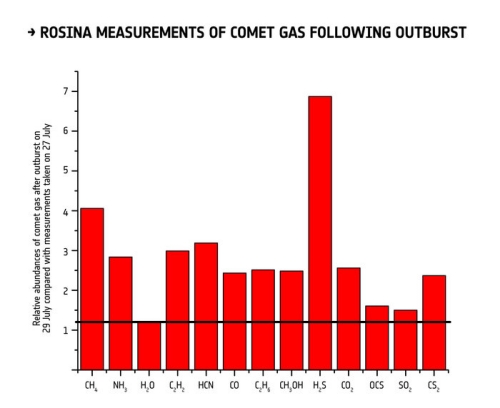 Image: During an outburst of gas and dust from Comet 67P/Churyumov–Gerasimenko on 29 July 2015, Rosetta’s ROSINA instrument detected a change in the composition of gases compared with previous days. The graph shows the relative abundances of various gases after the outburst, compared with the measurements two days earlier. For example, the amount of carbon dioxide (CO2) increased by a factor of two, methane (CH4) by four, and hydrogen sulphide (H2S) by seven, while the amount of water (indicated by the horizontal black line) stayed almost constant. Credit: ESA.

As you would expect, dust hits sharply increased, reaching 30 hits per day vs. 1-2 per day earlier in July. 70 hits were recorded in one four hour period on August 1, showing the persistence of the outburst’s effects. We’ll doubtless see further demonstrations of the Sun’s influence on this comet as the mission continues to follow it. Tracking interactions between the comet and the solar wind had been high on the priority list for Rosetta researchers, so the recent outburst gives every indication that our data on the phenomenon will be abundant.

Next post: A Science Critique of Aurora by Kim Stanley Robinson