A Supernova Trigger for Our Solar System

The interactions between supernovae and molecular clouds may have a lot to tell us about the formation of our own Solar System. Alan Boss and Sandra Keiser (Carnegie Institution for Science) have been exploring the possibility that our system was born as a result of a supernova ‘trigger.’ Their new paper follows up on work the duo have performed in recent years on how a cloud of dust and gas, when struck by a shock wave from an exploding star, could collapse and contract into a proto-star. The surrounding gas and dust disk would eventually give birth to the planets, although just how the latter occurs gets interesting, as the latest from Boss and Keiser reveals. 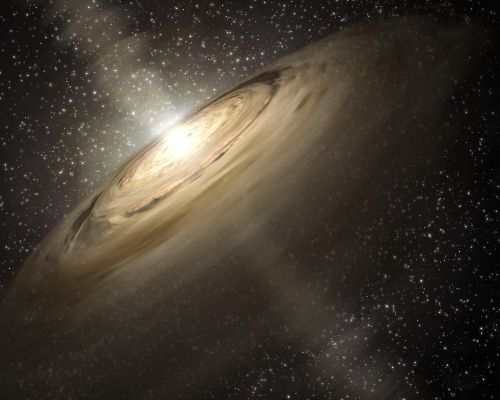 The new work extends Boss and Keiser’s modeling of such events. But before getting into that, let’s look at what we already know from observations of far more distant celestial objects. Working at radio and submillimeter wavelengths, various researchers have examined a Type II supernova remnant called W44 in light of how it is interacting with the W44 giant molecular cloud. We think of molecular clouds as venues for star formation, places where molecules like molecular hydrogen can form.

Supernova remnants are bounded by an expanding shock wave behind which heated ejecta from the explosion are found, with the shock wave capable of heating up plasma to millions of Kelvin. What we see in the W44 remnant is that its shock wave, pushing into the W44 molecular cloud, is producing clumps of compressed molecular gas. The idea of a triggered collapse of dense molecular clouds and the injection of material from the supernova into a collapsing disk is supported by previous work Boss and Keiser performed with 2-D and 3-D modeling. 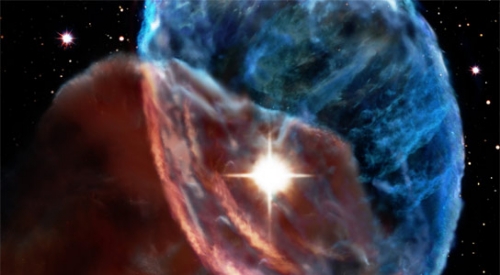 What we have in the current paper is a new look at the key issue in this collapse — the distribution of short-lived radioisotopes formed during the supernova explosion and pushed into the region of a cloud that would eventually become our Solar System. Boss and Keiser’s models show that a pressure wave from a supernova blast striking a dense gas cloud would form indentations in the surface of the cloud, where the radioisotopes would be injected into the collapsing gas. These ‘finger-like’ indentations are described in the paper as ‘R-T fingers,’ after English physicists Lord Rayleigh and Sir Geoffrey Taylor, who explored instabilities at the interface where two fluids of different densities meet.

The Boss/Keiser models can account for the isotopes we find in early meteorites, but the researchers believe they also point to an explanation for the spin of the Solar System. Angular momentum imparted by the shock indentations, they argue, would allow the disk of gas and dust to form around the Sun rather than being pushed directly into it. In their models, without the necessary spin produced by the shock front, the disk materials would simply disappear into the Sun. Thus shock-induced spin enables planet formation, a result Boss calls ‘a complete surprise to me.’

Image: These images show the central plane of a rotating disk orbiting a newly formed protostar (dark dot) formed in a three-dimensional model of the shock-triggered collapse of a molecular cloud of gas and dust. Density is shown on the left, while the x velocity plot on the right shows how the shock (outer edge) has injected fingers with motions that are responsible for producing the spin of the disk around the central protostar. Credit: Alan Boss.

Remarkably, these new models have also introduced a new feature of the shock wave triggering and injection mechanism: the R-T fingers responsible for SLRI [short-lived radioisotope] injection can concomitantly result in the injection of enough momentum to largely determine the direction of the resulting disks’ spin axis orientations. In such cases, the R-T fingers may have been responsible not only for the acquisition of the SLRIs inferred to have been present in the most primitive meteorites, but also for the very fact that a rotating protostellar disk was formed, a disk that eventually led to the formation of our planetary system.

Thus we get an idea of what may have caused the collapse that led to the protostar that would become our own Sun, and by extension a mechanism for star and system formation that would have occurred widely in the galaxy. The R-T ‘fingers’ impart angular momentum that make disk formation around the infant star at the heart of the cloud possible.

The paper is Boss and Keiser, “Triggering Collapse of the Presolar Dense Cloud Core and Injecting Short-Lived Radioisotopes with a Shock Wave. IV. Effects of Rotational Axis Orientation,” accepted by The Astrophysical Journal (preprint).