With Rosetta’s continuing mission at Comet 67P/Churyumov–Gerasimenko, now post-perihelion but continuing to gather data, comets and their role in the history of the Solar System stay very much on my mind. Their role as delivery mechanisms for volatiles to an infant Earth is widely investigated, as is the idea that comet impacts may be linked to some of the great extinction events. But perhaps nothing is as provocative as the idea that comets had a role in actually starting life on our planet, with obvious implications for the likelihood of life elsewhere.

Image: This series of images of Comet 67P/Churyumov–Gerasimenko was captured by Rosetta’s OSIRIS narrow-angle camera on 12 August 2015, just a few hours before the comet reached the closest point to the Sun along its 6.5-year orbit, or perihelion. The image at left was taken at 14:07 GMT, the middle image at 17:35 GMT, and the final image at 23:31 GMT. The images were taken from a distance of about 330 km from the comet. The comet’s activity, at its peak intensity around perihelion and in the weeks that follow, is clearly visible. In particular, a significant outburst can be seen in the image captured at 17:35 GMT. Credit: ESA/Rosetta/MPS for OSIRIS Team MPS/UPD/LAM/IAA/SSO/INTA/UPM/DASP/IDA.

And now we have the interesting news out of the recent Goldschmidt geochemistry conference in Prague, where we learned about experiments designed to duplicate early cometary impacts in a laboratory environment that replicates the Earth as it was four billion years ago. The study was performed by two Japanese scientists, Haruna Sugahara (Japan Agency for Marine-Earth Science and Technology, Yokahama) and Koichi Mimura (Nagoya University).

We learn that the result of simulated comet impact is the production of peptides up to three units long. Peptides are two or more amino acids linked in a chain, making them small proteins. Tripeptides — what Sugahara and Mimura found in their experiment — consist of three amino acids bound by two peptide bonds.

The researchers used a propellant gun to simulate the cometary impact, working with frozen mixtures of amino acids, water ice and silicates cooled to a brisk 77 K. Gas chromatography could then be used to analyze the result, showing that a significant number of the amino acids had joined into peptides after impact. According to this European Association of Geochemistry news release, the amount of peptides produced in these simulated events was roughly the same as would have been produced by terrestrial processes including lightning storms.

Because proteins are made up of polypeptides, the mechanisms that can form them are key to life. Bear in mind that NASA’s Stardust mission has already found amino acids like glycine in Comet Wild 2, while the Deep Impact collision in 2005 revealed organic particles inside the comet, adding to the notion that early comet strikes be a factor on Earth. Says Sugahara:

“Our experiment showed that the cold conditions of comets at the time of the impacts were key to this synthesis, as the type of peptide formed this way are more likely to evolve to longer peptides. This finding indicates that comet impacts almost certainly played an important role in delivering the seeds of life to the early Earth. It also opens the likelihood that we will have seen “similar chemical evolution in other extraterrestrial bodies, starting with cometary-derived peptides.” 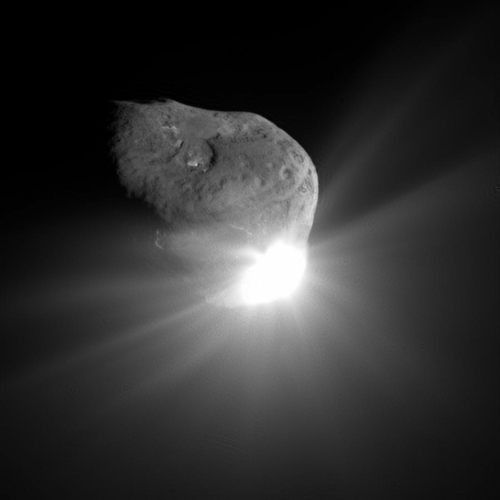 Image: This spectacular image of comet Tempel 1 was taken 67 seconds after it obliterated Deep Impact’s impactor spacecraft. The image was taken by the high-resolution camera on the mission’s flyby craft. Scattered light from the collision saturated the camera’s detector, creating the bright splash seen here. Linear spokes of light radiate away from the impact site, while reflected sunlight illuminates most of the comet surface. The image reveals topographic features, including ridges, scalloped edges and possibly impact craters formed long ago.
Credit: NASA/JPL-Caltech/UMD.

What this work highlights is the fact that we’re still learning about the ingredients that go into comets — Sugahara and Mimura, after all, worked with only some of these constituents. Thus the value of missions like Rosetta, as we continue to plumb the depths of cometary interiors. A model in which comets contributed some necessary substances while terrestrial processes like lightning created others is still very much in the mix. Both cometary and asteroid impacts during the Late Heavy Bombardment would have delivered a wide range of substances to the surface.

“This is a new piece of work which adds significantly to the exciting field of the origin of complex molecules on the Earth,” says Mark Burchell (University of Kent), who goes on to say:

“It has long been known that ices under shock can generate and break bonds in complex organics. The detection of amino acids on comet 81P/Wild 2 by the NASA Stardust mission in the last decade, and the now regular exciting news from the Rosetta mission to comet 67P/Churyumov-Gerasimenko indicates that comets are a rich source of materials. Two key parts to this story are how complex molecules are initially generated on comets and then how they survive/evolve when the comet hits a planet like the Earth. Both of these steps can involve shocks which deliver energy to the icy body. For example, Zita Martins and colleagues recently showed how complex organic compounds can be synthesized on icy bodies via shocks. Now, building on earlier work, Dr. Sugahara and Dr. Mimura have shown how amino acids on icy bodies can be turned into short peptide sequences, another key step along the path to life.”

The paper is Sugahara and Mimura, “Peptide synthesis triggered by comet impacts: A possible method for peptide delivery to the early Earth and icy satellites,” Icarus Vol. 257 (1 September 2015), pp. 103-112 (abstract).